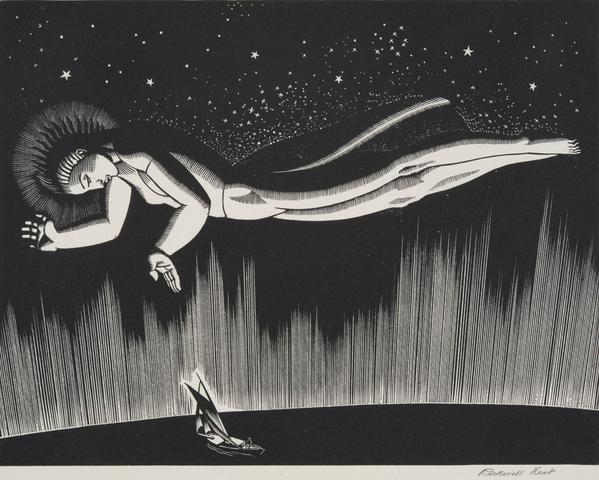 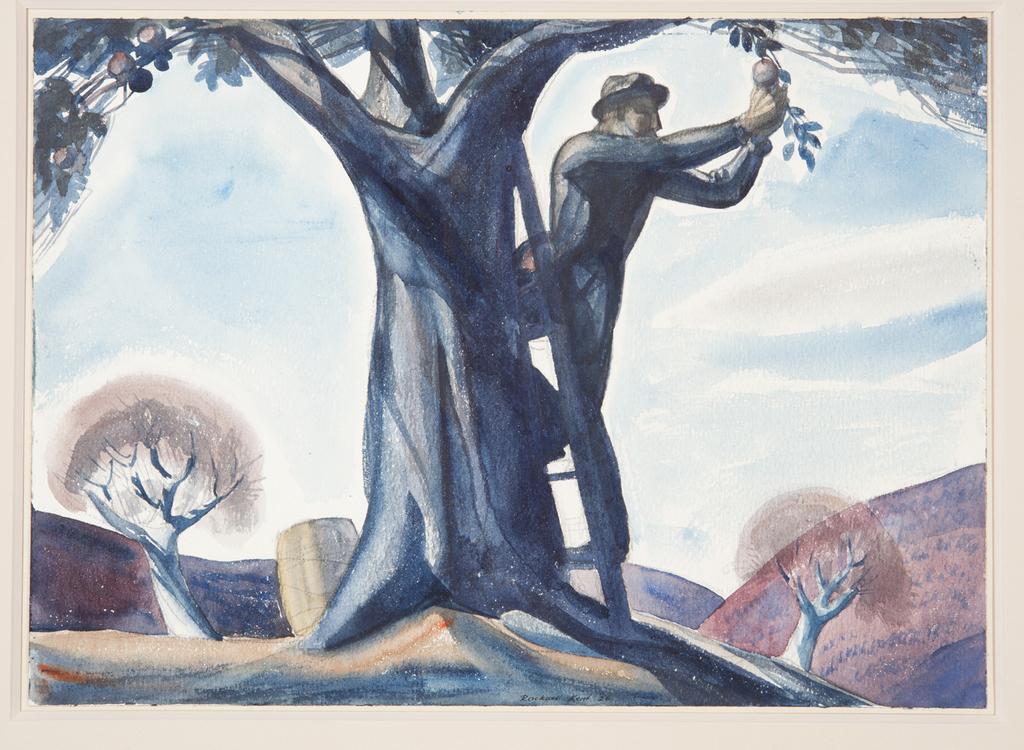 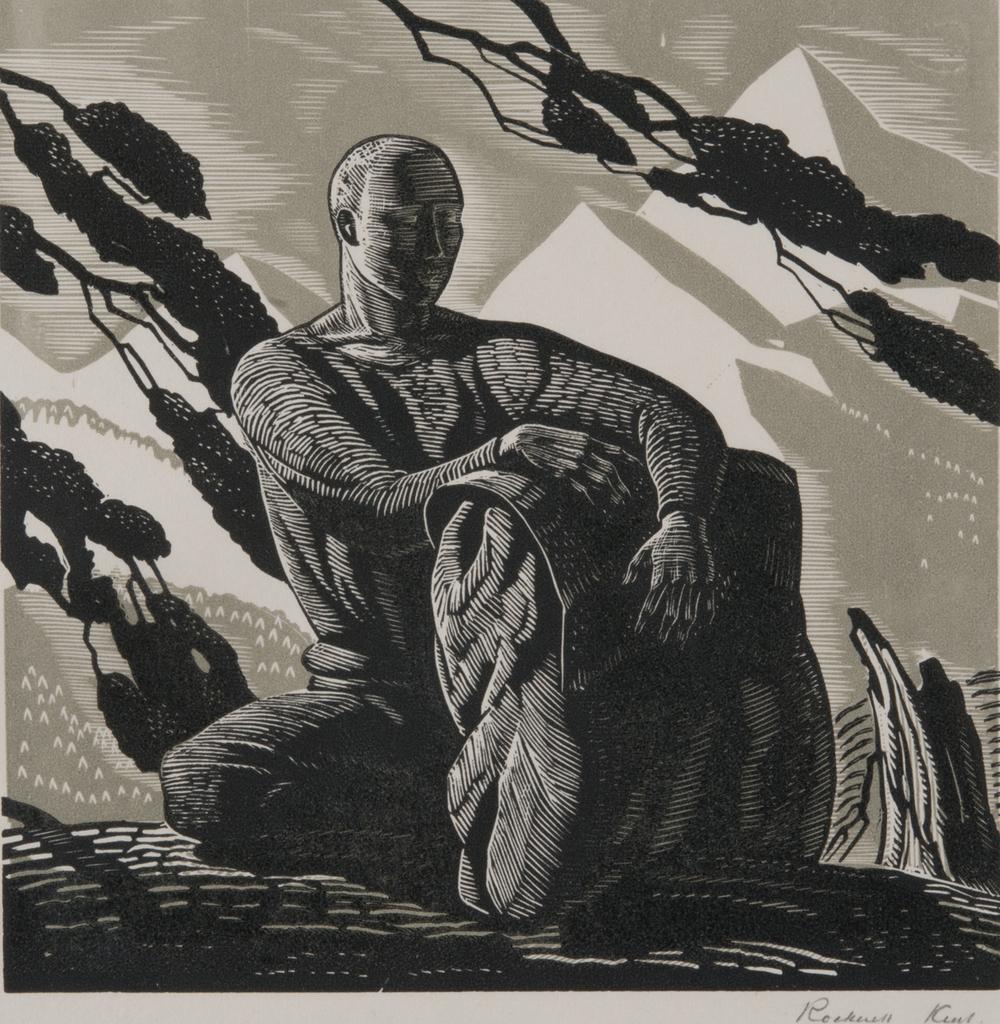 
Once famous among his contemporaries as an artist, author, adventurer, and political activist, Rockwell Kent (1882–1971) left an enduring legacy as a printmaker and illustrator of books. His drawings and limited edition prints could transport viewers to far-away lands, bolster progressive causes, and prove effective both in advertising and book illustration. Rockwell Kent—Voyager surveys the artist’s achievements from 1907 to the 1950s, including the artist’s travel narratives, illustrations for literary classics, and advertising designs, as well as works that illuminate his commitment to leftist politics from World War I through the McCarthy era. With over 100 works on paper, the exhibition also features watercolors, pen and ink drawings, a sketchbook, and lithographic stone that open a window onto the artist’s creative process.

“Kent’s fortunes rose and fell most dramatically during his lifetime,” says Brooks Rich, the Dorothy J. del Bueno Curatorial Fellow at the Philadelphia Museum of Art. “In the 1920s and 30s, when he achieved celebrity status, he was hailed as one of the most famous graphic artists in America. By the 1950s the artist’s reputation had suffered a decline, due in part to his support of controversial progressive causes and the ascendancy of Abstract Expressionism in avant-garde art circles. Today, as his work attracts renewed interest, the rich collections of the Philadelphia Museum of Art offer a fresh opportunity to reconsider the depth and complexity of his achievement.”

Drawn entirely from the holdings of the Philadelphia Museum of Art, the exhibition begins with early black and white illustrative work, including Youth Torn between Love and Desire (1916) and Domino Room (1916), produced for Vanity Fair, which shows society couples ballroom dancing (Kent’s self-portrait appears, Alfred Hitchcock-like, at bottom left).

The artist’s work from the 1920s highlights images and books that emerged from travels to Alaska, Greenland, and Tierra del Fuego. Voyaging (Self Portrait) (1924)places the writer/illustrator amid windswept branches and before snowcapped mountains, reflecting a time when feats of famous explorers were regular features in weekly magazines and newsreels. Kent contributed to over 140 books, including Herman Melville’s Moby Dick (1930), The Canterbury Tales of Geoffrey Chaucer (1934), and Walt Whitman’s Leaves of Grass (1936), all represented in this exhibition. Kent’s distinctive, sleek style of wood engraving is seen in Godspeed (1931–1932), one of 12 images used to advertise luxury motor yachts for the American Car and Foundry Company. These advertisements, which avoided text-heavy copy and adopted an Art Deco style relished by a fashionable clientele, were considered groundbreaking in their day. A life-long pacifist dedicated to socialist causes, the artist expressed his proletarian beliefs in Workers of the World Unite! (1937), a wood engraving of an idealized laborer wielding a shovel, and in the lithograph Wake Up America! (1945),a biting commentary on the state of democracy in America, showing a sleeping man next to an hourglass.

The Philadelphia Museum of Art’s collection of Rockwell Kent works on paper— largely formed by Carl Zigrosser, the founding curator of the Museum’s Department of Prints and Drawings—is virtually unmatched in its depth and diversity. A complementary installation in the Museum’s Library Reading Room further explores the artist’s engagement with book culture and his relationship with Zigrosser.

About the artist: Born in Tarrytown, New York, in 1882, Rockwell Kent’s fortunes waxed and waned over a long and varied career which included travels to Greenland, South America, and Newfoundland. Profoundly influenced by transcendentalism, Kent was drawn to allegory and symbolism, frequently depicting human figures set against the rugged natural world. A life-long supporter of leftist politics, the artist was called before the House Un-American Activities Committee in 1953, but refused to answer any questions. He was later denied a passport because of his alleged affiliation with the Communist Party, but took his fight all the way to the Supreme Court, which overturned the decision in 1958. Demonstrating support for American-Soviet relations, in 1960 Kent donated several hundred of his paintings and drawings to the Soviet Union, many of which can be seen today at the State Hermitage Museum, St. Petersburg, Russia.