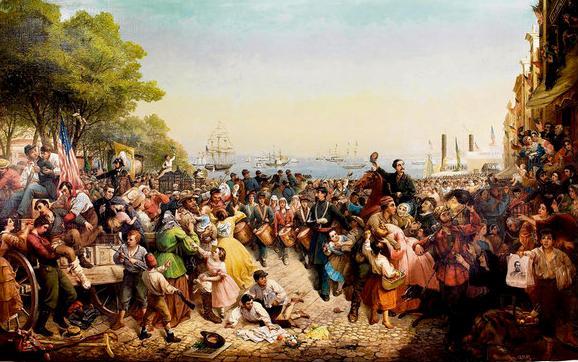 Newly conserved and on public view for the first time in over 60 years, Lang’s massive canvas documents the return of New York’s 69th Irish Regiment from Civil War battle on July 27, 1861. Shown against the dramatic backdrop of New York Bay, the scene captures the emotional and physical tumult that electrified the welcoming crowds. Lang’s mission to provide a complete impression of an actual urban event on such a scale is unmatched in 19th-century American art.

Featuring fifty-five works from New-York Historical’s great collection, Making American Taste casts new light on both the history of American art and the formation of American cultural ideals during a crucial period from roughly the 1830s to the late 1860s. During these years, spanning the era of Jacksonian populism through the aftermath of the Civil War, the role of the arts in a democracy was hotly debated in the United States. The exhibition will remain on view, with one brief hiatus, through August 19, 2012, after which it will travel to venues throughout the United States.

Making American Taste contributes fresh thinking to the study of this contentious and productive period by looking at an unusually broad range of narrative subject matter through the lens of taste. Going beyond the well-known examples of landscape painting and rural and domestic genre scenes, the exhibition also integrates historical, literary and religious subjects into the story of American art during these years. In so doing, the exhibition reveals the visual styles, standards of decorum and repertoire of knowledge that came to represent cultural refinement to nineteenth-century Americans.

West took inspiration from Homer’s The Iliad to show the helmeted Odysseus returning Chryseis to her elderly father, Chryses, a priest of Apollo. The reunion takes place beneath a statue of Apollo, who had answered Chryses’ prayers for his daughter’s release from captivity at the hands of King Agamemnon. When this painting and its pendant, Aeneas and Creusa, debuted at London’s Royal Academy in 1771, these Neoclassical paintings represented the height of artistic taste.

The Trojan War forms the backdrop to Aeneas and Creusa, named for the husband and wife whose story is recounted in Virgil’s The Aeneid. Aeneas explains to Creusa and their son Ascanius the meaning of the omens (including the meteor streaking through the sky) that precipitate their flight from Troy. 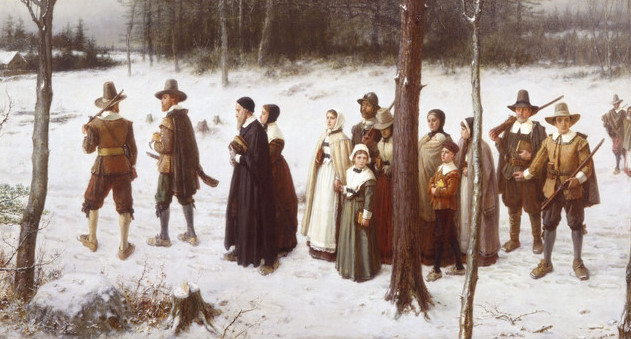 Called the “Painter of New England Puritanism,” Boughton often took inspiration from books, relying here on William Henry Bartlett’s 1853 history, The Pilgrim Fathers. This image of colonists solemnly processing through a snowy wood to worship in the distant settlement received warm praise when it debuted at the Royal Academy in London in 1867.

Described by a contemporary reviewer as “an image of pure Yankeeism,” this painting portrays two men shrewdly negotiating the sale of a horse. By 1835 Mount had committed himself to focusing only on American subjects, fearing that the “splendor of European art” would somehow taint his vision.

Negro Life at the South secured Johnson’s reputation as one of the nation’s foremost genre specialists when it was displayed at the National Academy of Design in 1859. Although the painting depicts the yard behind slave quarters in Washington, D.C., most critics imagined that it portrayed a scene of plantation life, an assumption that led to the painting’s popular title, The Old Kentucky Home.

Painted soon after the financial panic of 1857, The Sidewalks of New York underscores the yawning divide between rich and poor in antebellum New York. Although the scenario is an unlikely one—such a well-dressed little girl would not have been unaccompanied in public—the situation emphasizes the fact that barriers separating social classes were dissolving. The array of posters advertising popular entertainments delivers the ironic message that these common enjoyments are far from the grasp of the bedraggled woman, who remains an anonymous, faceless member of the masses who were seen as threats to the civility of upper-class urban existence. <

Sunday Morning was executed relatively early in Durand’s painting career and reflects his experiments with genre subjects and his growing interest in landscape. Durand’s treatment of the theme signals his well-known belief in the restorative capacity of nature; the family he portrayed must first wend its way through a verdant, sunlit landscape as if in spiritual preparation for the service that will take place in the distant church.

Sowing the Word alludes to the parable of the sower from Luke 8:1–15. Huntington adjusted the parable to show that the words of the elderly teacher fall on fertile ground represented by the attentive, modestly dressed woman, and on rocky ground symbolized by the worldly woman, who fails to heed his lessons.

Making American Taste is organized for the New-York Historical Society by Barbara Dayer Gallati, Guest Curator, and Linda S. Ferber, Vice President and Senior Art Historian of New-York Historical. Their selection of works includes the long-awaited return to New-York Historical, after conservation, of Louis Lang’s famed monumental history painting of 1862, The Return of the 69th (Irish) Regiment from the Seat of War. Also on view will be paintings and sculptures by canonical artists such as Benjamin West, Asher B. Durand, William Sidney Mount and Eastman Johnson. Just as important, however, is the selection of significant works by artists who were major figures in their own time but have been virtually ignored in current American art surveys, such as Daniel Huntington, Henry Peters Gray and Thomas Harrison Matteson. The reintegration of these forgotten artists into the larger art-historical framework will challenge the canon of taste that has elevated genre painting to a privileged position at the expense of other narrative modes, including narratives of Stuart and Tudor history, scenes taken from Shakespeare and other authors and idealized and religious subjects inspired by European masters.

A fully illustrated 323-page publication published by D Giles Ltd in association with the New-York Historical Society will accompany the exhibition.

About the New-York Historical Society

The New-York Historical Society, one of America’s pre-eminent cultural institutions, is dedicated to fostering research, presenting history and art exhibitions and public programs that reveal the dynamism of history and its influence on the world of today. Founded in 1804, New-York Historical has a mission to explore the richly layered political, cultural and social history of New York City and State and the nation, and to serve as a national forum for the discussion of issues surrounding the making and meaning of history.

New-York Historical is recognized for engaging the public with deeply researched and far-ranging exhibitions, such as Alexander Hamilton: The Man Who Made Modern America; Slavery in New York; Nature and the American Vision: The Hudson River School at the New-York Historical Society; Grant and Lee in War and Peace; Lincoln and New York; The Grateful Dead: Now Playing at the New-York Historical Society; and Nueva York. Supporting these exhibitions and related education programs is one of the world’s greatest collections of historical artifacts, works of American art and other materials documenting the history of the United States and New York.

Posted by Jonathan Kantrowitz at 1:43 PM