Bellini, Giorgione, Titian, and the Renaissance of Venetian Painting


Bellini, Giorgione, Titian, and the Renaissance of Venetian Painting presented more than 50 masterpieces from the most exciting period of the Renaissance in Venice; June 18 through September 17. 2006 at the National Gallery of Art, Washington.
The exhibition explored the relationships between these and other artists, emphasizes their innovative treatments of new pictorial themes such as the pastoral landscape, and reveals what modern conservation science has discovered about the Venetian painters’ techniques.

Two museums with outstanding collections of Renaissance art, the National Gallery of Art, Washington, and the Kunsthistorisches Museum, Vienna, were the exhibition organizers: together they contributed about one-third of the works on view. Among the most admired masterworks of the Renaissance,

The exhibition featured significant loans from The National Gallery, London; the Prado, Madrid; the Uffizi, Florence; and many other museums and private collections. After closing in Washington, the exhibition traveled to the Kunsthistorisches Museum, Vienna, where it was on view from October 17, 2006, to January 7, 2007.

Bellini, Giorgione, Titian, and the Renaissance of Venetian Painting differed from previous surveys of 16th-century Venetian art by focusing exclusively on paintings from the first three decades of the century, and by presenting them thematically, rather than by artist. The period represents, visually and intellectually, the most exciting phase of the Renaissance in Venice, when the old Bellini (d. 1516), Giorgione (d. 1510), young Titian, Sebastiano Luciani, later called del Piombo (active in the city until 1511), and Jacopo Negretti, known as Palma Vecchio (d. 1528), were all working side by side. While celebrating the achievements of Bellini and his most famous pupils, the exhibition also presented more conservative masters, like Cima da Conegliano and Vincenzo Catena, and it included other artists, like Lorenzo Lotto, who worked, though not exclusively, in Venice at the time.

In early 16th-century Venice, artists turned to new subjects drawn from classical antiquity and developed new styles and new techniques to represent them. Provocative subject matter and virtuoso displays of skill were appreciated by a new kind of sophisticated patron. A highlight of the exhibition was the presentation of

paintings that once hung together in the Duke of Ferrara’s study, considered the most beautiful room in Renaissance Italy.

The exhibition emphasized the artists’ innovative treatments of several new pictorial themes, outlined below, and demonstrates how religious painting, still dominant, was transformed. It also explores how ideas about music, love, and time pervade the art of the period.

The pastoral landscape, with its Arcadian motifs of nymphs, shepherds, and shady groves, became a quintessentially Venetian mode of painting. The exhibition included the epitome of the genre, Titian’s Concert Champetre. (above) The development of the pastoral extended to religious painting, with Christian or biblical figures or narratives vividly portrayed in idyllic settings. In one of many illuminating juxtapositions in the exhibition, one could compare 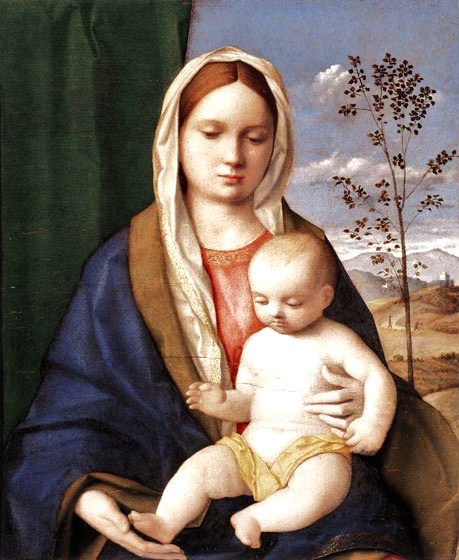 Bellini’s Virgin with the Blessing Child (1510) and

Titian has shifted his figures off the central axis to emphasize the landscape view. 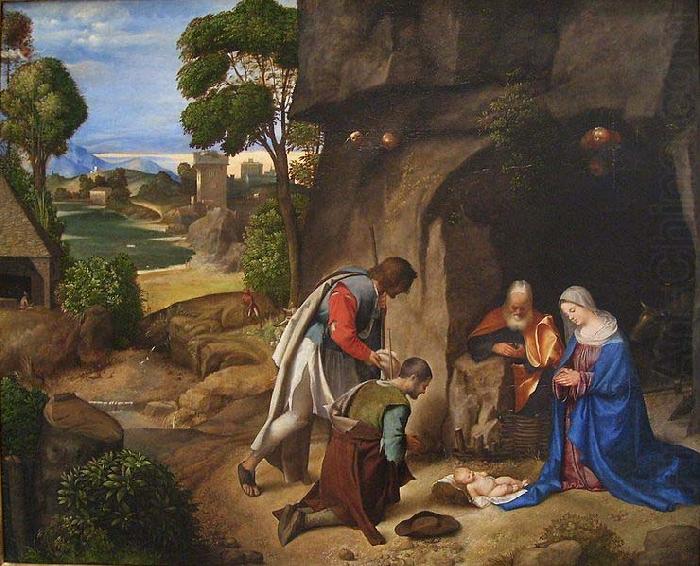 Also on view was Giorgione’s version of the Adoration of the Shepherds ("Allendale Nativity") (c. 1500),

which employs elements of the pastoral and was much admired: the exhibition includes three variants on this work.

The female nude and eroticism

Given that images of women of any sort were rare in Venetian painting, the introduction of nudes or partially clothed figures in early 16th-century paintings was truly revolutionary. In the exhibition, 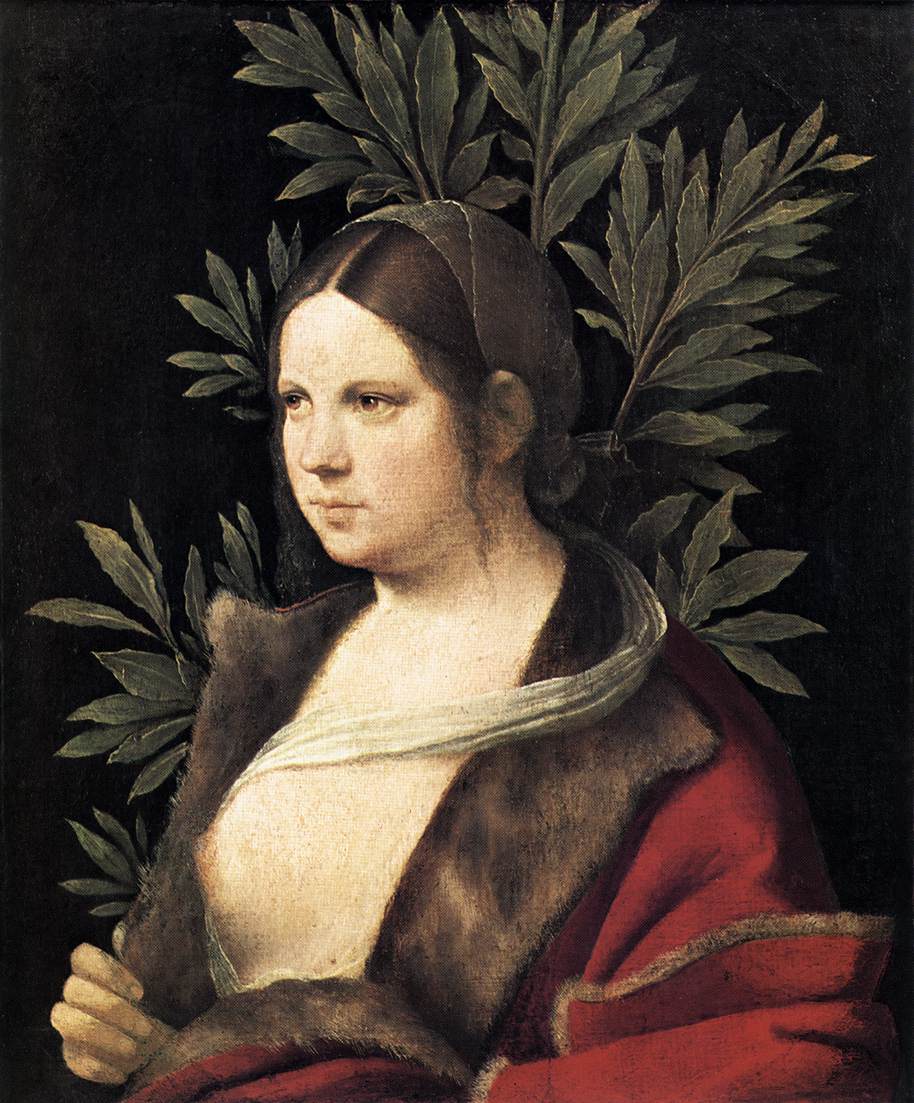 Giorgione’s famous "Laura" (1506), which launched the new genre, was presented with

Titian’s portrait became a model for the "Belle Donne" of other artists, such as Palma Vecchio. Even to this day, it is not known whether these images of women are idealized portraits of actual women or images of ideal female beauty.

Giorgione and his circle introduced a new kind of idealized portrait, in which an individual was shown in the guise of a lover, poet, musician, or soldier. Called "action" portraits, these works depict young men acting out roles, as in Portrait of a Poet (c. 1520) by Palma Vecchio or Man in Armor (c. 1511/1512) by Sebastiano del Piombo. Beyond single portraits, there are double and triple portraits of men together, as in The exhibition ended with

Titian’s Man with a Glove (c. 1523/1524), whose realism breaks with Giorgione’s poetic idealization.

In addition to the curators, an outstanding group of specialists in Venetian Renaissance art have contributed to the catalogue, including Jaynie Anderson, University of Melbourne; Deborah Howard, Cambridge University; Peter Humfrey, University of St Andrews; and Mauro Lucco, Università degli Studi di Bologna. 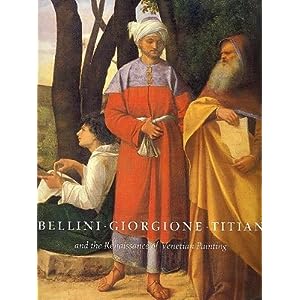 The fully illustrated catalogue was be published in English, German, and Italian.

Posted by Jonathan Kantrowitz at 11:38 AM