Matisse: In Search of True Painting - Double Paintings and Series


Henri Matisse (1869-1954) was one of the most acclaimed artists working in France during the first half of the 20th century. The critic Clement Greenberg, writing in The Nation in 1949, called him a “self-assured master who can no more help painting well than breathing.”

Unbeknownst to many, painting had rarely come easily to Matisse. Throughout his career, he questioned, repainted, and reevaluated his work. He used his completed canvases as tools, repeating compositions in order to compare effects, gauge his progress, and, as he put it, “push further and deeper into true painting.” While this manner of working with pairs, trios, and series is certainly not unique to Matisse, his need to progress methodically from one painting to the next is striking.

Matisse: In Search of True Painting presents this particular aspect of Matisse’s painting process by showcasing 49 vibrantly colored canvases. For Matisse, the process of creation was not simply a means to an end but a dimension of his art that was as important as the finished canvas.

The exhibition is organized by The Metropolitan Museum of Art, New York, in collaboration with the Statens Museum for Kunst, Copenhagen, and the Centre Pompidou, Musée National d’Art Moderne, Paris.

Matisse copied old master paintings as part of his academic training. He found much to admire on the walls of the Musée du Louvre yet was also receptive to the contemporary pictures he encountered in Parisian galleries. He was particularly intrigued by the work of Paul Cézanne (1839-1906) and Paul Signac (1863-1935). In 1904-1905 Matisse arranged a still life and painted it in two different ways.

The green and violet clusters of diagonally placed brushstrokes in

evoke passages in certain of Cézanne’s paintings, while the vivid colors and confetti-like effects of

Matisse borrowed stylistic elements from the two artists but was more interested in rendering his own sensations than subscribing to either of their theories.

Matisse’s stylistic exploration sparked the creation of pairs in which neither painting is entirely indebted to another artist.

Upon his return to the fishing village of Collioure in the summer of 1906, he depicted a local teenager in a work that has all the hallmarks of his own vividly colored, expressive Fauvism He then painted a second version of the composition on an identically sized canvas, this time employing flat color and deformation to produce a drastically different effect Unsure of his new direction, Matisse told friends that Young Sailor II had been painted by the local postman.

Matisse later explained that his aim was to “condense the meaning of [a] body by seeking its essential lines.”

Over the next 10 years, Matisse approached his pairs in a variety of ways. He used a full-size cartoon and squaring to create his next major pair, life-size representations of a trio of nudes near the sea 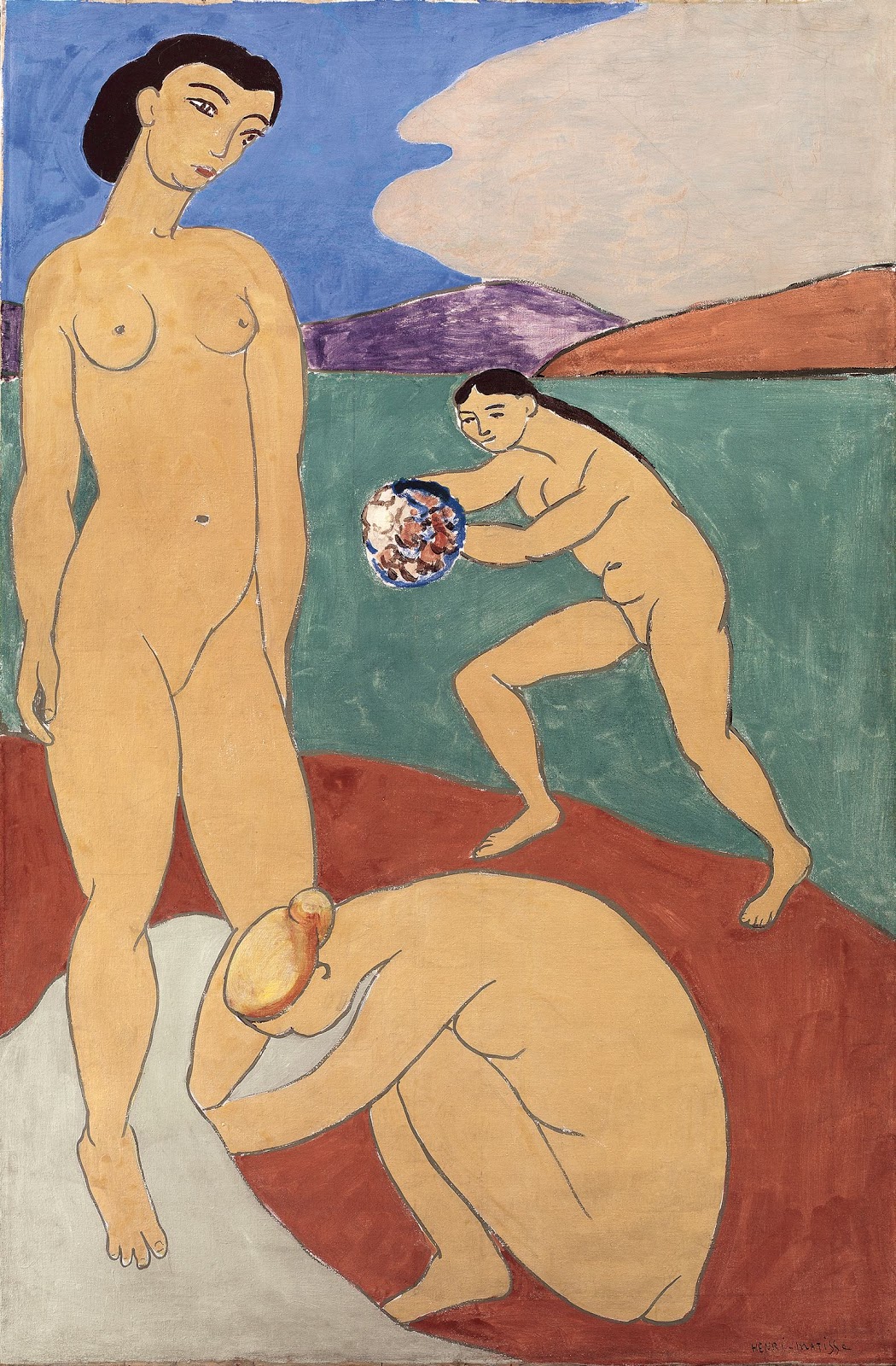 In 1914, he painted two large views from the window of his Parisian studio

Seen together they underscore issues that intrigued him at the time: means of representation, the role of color, and the question of what constitutes a finished canvas. Painting in pairs on canvases of the same size offered Matisse alternate solutions to any given pictorial challenge.


(Laurette in a Green Robe, Black Background, 1916, The Metropolitan Museum of Art;


Matisse’s enthusiasm for working in series coincided with his revived interest in Impressionism. It was on his mind when he attempted to capture the essence of a light-filled room in a series of canvases painted in Nice in the winter and spring of 1917–18:

Interior at Nice (Room at the Hôtel Beau-Rivage) (Philadelphia Museum of Art),

The Open Window (Room at the Hôtel Beau-Rivage) (private collection),

Interior with a Violin (Room at the Hôtel Beau-Rivage) (Statens Museum for Kunst).


In the 1930s Matisse hired a photographer to document his progress on certain paintings. His model and studio assistant Lydia Delectorskaya recalled that the photographer was called in “when, at the end of a session, it seemed to Matisse he had come to the end of his work or he decided he had arrived at a significant stage….” Instead of setting his canvas aside and repeating the composition on a new canvas of identical size, as he had done in the 1900s and 1910s, Matisse used the photographs to preserve states of his paintings. He consulted them as he worked, comparing them to the painting in order to see whether he had advanced or regressed.

In December 1945, six recent paintings by Matisse were displayed at the Galerie Maeght in Paris. Each was juxtaposed with large framed photographs documenting its evolution. The photographs are not depictions of related works; they trace the evolution of the canvas they surround. Matisse embraced the opportunity to put his process on display and in so doing, dispelled the notion that he worked spontaneously. He insisted that the only point of the exhibition was to present “the progressive development of the artworks through their various respective states toward definitive conclusions and precise signs.” By agreeing to make the photographs public, Matisse tacitly acknowledged that their presence added to the viewers’ understanding and appreciation of his work. The Metropolitan Museum’s exhibition will recreate three walls of the Galerie Maeght exhibition, featuring The theme of the studio interior—a consistent motif in Matisse’s oeuvre throughout his career—was addressed in Matisse’s final painted series, created from 1944 to 1948 at the Villa Le Rêve in Vence, France. The septuagenarian artist felt that a lifetime of work had prepared him to use color as a means of intimate expression. In the spring of 1948, he wrote to his son Pierre that his most recent paintings “impress everyone who has seen them because they are vivid and rich.” Interior with an Egyptian Curtain (1948, The Phillips Collection, Washington, D.C.), Interior with Black Fern (1948, Fondation Beyeler, Riehen/Basel), and Large Red Interior (1948, Centre Pompidou, Musée National d’Art Moderne, Paris) made their public debut in February 1949 at Pierre Matisse’s New York gallery, where they were displayed unframed so that visitors would feel embraced and then transported by the color. The critic Clement Greenberg was not alone in concluding that “Matisse is at the present moment painting as well as he ever has painted before, and in some respects perhaps, even better.”

Matisse: In Search of True Painting is organized at The Metropolitan Museum of Art by Rebecca Rabinow, Curator in the Museum’s Department of Modern and Contemporary Art. Earlier presentations of the exhibition were held at the Centre Pompidou, Musée Nationale d’Art Moderne, Paris (“Matisse: Paires et Séries,” March 7-June 18, 2012, organized by Cécile Debray) and at the Statens Museum for Kunst, Copenhagen (“Matisse: Fordobling og Variation,” July 14-October 28, 2012, organized by Dorthe Aage
Posted by Jonathan Kantrowitz at 2:48 PM