Georges Seurat (French, 1859–91), one of the most influential painters of the nineteenth century, was a prolific draftsman who, despite a brief career, created an extraordinary body of work on paper. Georges Seurat: The Drawings was the first exhibition in almost 25 years to focus exclusively on the artist’s luminous drawings. These drawings played a crucial role in Seurat’s career and are often seen as touchstones for the art of the twentieth century and forerunners of abstraction. This comprehensive exhibition surveyed his entire oeuvre, with over 135 works, primarily the artist’s conté crayon drawings, along with a small selection of oil sketches and paintings, and explores his materials and methods, his subject matter, and the relationship between his drawings and paintings. The exhibition, organized by Jodi Hauptman, Associate Curator, Department of Drawings, The Museum of Modern Art, was on view from October 28, 2007, through January 7, 2008.

This exhibition showcased one of Seurat’s greatest achievements: the artist’s exploration of the dramatic relationship between darkness and light. The placement of dark next to light so that each would amplify the other—an effect Seurat called “irradiation”—generated a soft halo or glow around his figures. To achieve such glowing luminosity and velvety blackness, Seurat tailored his application of conté crayon to a French handmade textured paper called Michallet, leaving parts of the paper untouched to indicate illumination while building up his medium to intensify shadows. Ms. Hauptman stated, “Bathed in light that shimmers around them, nurses, street sweepers, elegant ladies, and a host of others emerge out of a mysterious, unreadable darkness.”

Most of Seurat’s drawings were created as independent works. These drawings were featured in the exhibition, along with a selection made during his academic training and groups of studies created for his renowned monumental canvases, such as 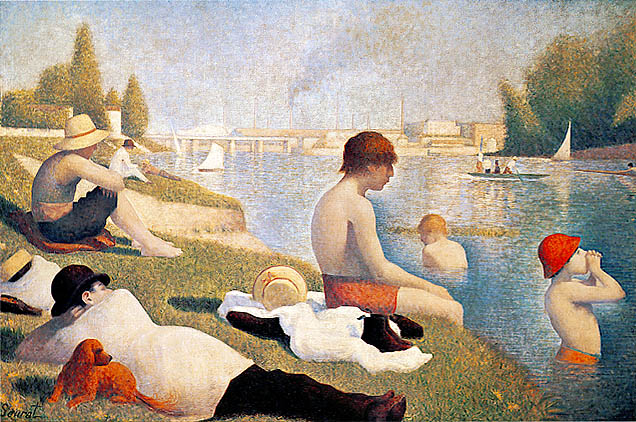 Seurat, best known as the leader of the Neo-Impressionist movement and inventor of pointillism, a form of painting in which tiny dots of primary colors are used to generate secondary colors, had a tragically short artistic career that ended with his death at age 31 in 1891.

Despite the lack of Seurat’s letters, diaries, archives, and photographs, it is known that drawing was of great importance for the artist, as seen from his extensive output—an extraordinary 500 works on paper (with about 230 dating from his mature period) have been catalogued.

Georges Seurat was born in 1859 into a Parisian bourgeois family. He began drawing as a boy, starting his formal training in a small neighborhood art school. When he was 18, he entered the Ecole des Beaux-Arts and made numerous drawings from antique sculpture and live models, and copied masterworks by such artists as Ingres, Raphael, and Poussin. During his required military service, completed in Brest, a town in northwestern France (1879–1880), Seurat began to turn away from his Beaux-Arts training. Without models and antique sculptures, Seurat sketched what was available, including his fellow recruits and his own hands. In addition, four sketchbooks (c. 1877–81) show that Seurat wandered through the city observing people and architectural details. In the unfolding of Seurat’s career, these sketches function as a hinge between his academic training and his mature style: the attention to the everyday, the use of cross-hatching for rendering light on a surface, and a line that seems to have an agency of its own rather than functioning as descriptive contour.

Though traditional in subject, this large-scale portrait of his friend and fellow artist reveals the formal innovations that Seurat had already developed and would continue to refine throughout his brief career: the massing of tones to shape and form, the use of the conté crayon to create velvety blackness and glowing luminosity, and an evocative softness and mood. Seurat's choice of materials was critical to the look of his mature drawings.

In preparation for this exhibition, drawings in the Museum’s collection were examined closely by MoMA conservator Karl Buchberg with the goal of understanding Seurat’s materials and working techniques. The drawings were examined using low power magnification and other forms of analysis. A French handmade paper called Michallet, a set of black stick media known collectively as conté crayon, and fixative have been identified as Seurat’s most important materials. Mr. Buchberg’s research proves that the layering of conté crayon, the deployment of fixative to protect initial layers, and the judicious use of stumping (in which the medium, once applied, is manipulated with pointed rolls of paper, leather, or cork) are all key artistic techniques.

Seurat exploited the texture of the Michallet paper by stroking the conté crayon across the sheet’s ridges, thus devising his own kind of draftsmanship: he massed dark and light tones, abstracting figures, spaces, and structures; exploited unmarked paper to signify light; incorporated the paper’s surface pattern into his compositions; layered pigment to create a range of densities, from a translucent scrim to impenetrable darkness; and offered accurate descriptions of subjects using the barest of means.

The exhibition also addressesd the relationship between Seurat’s drawings and his paintings and the similar ways he approached these different mediums. Once again, analysis by Mr. Buchberg and other MoMA conservators shows the parallels in Seurat’s exploitation of his chosen support, whether it was paper, canvas, or wood panel. Moreover, lessons learned from working with conté on paper helped Seurat better understand chromatic relationships; in the exhibition visitors will see the links between the artist’s tonal rendering and his particular use of color, as well as the way he uses drawing to refine the positions, modeling, and lighting of his figures. Mr. Buchberg’s research is explored in depth in his essay in the exhibition’s accompanying catalogue and on the exhibition’s Web site, moma.org/seuratdrawings.

Seurat was interested in subjects drawn from urban Paris and its surroundings: modish women and city workers, modern transport and horse-drawn carts, the industrializing suburbs, and the popular entertainment of the day. But in contrast with Seurat’s renowned paintings of nineteenth century leisure, such as A Sunday on La Grande Jatte (1884–86) and Bathing Place, Asnières (1883–84), his drawings present empty places and lone figures. Seurat turned his back on the grand boulevards of Paris, presenting instead gritty and desolate views of Paris’s edges: the fallow area just outside the city walls known as the Zone and the industrializing suburbs with their factories and simple housing.

Embroidery (The Artist’s Mother) (c. 1882–83)—are completely absorbed in solitary activities while his more anonymous figures are often presented with their backs to the viewer or with their faces partially obscured as seen in The Veil (c. 1882–84), and Seated Woman with a Parasol (study for A Sunday on La Grande Jatte) (c. 1884–85). In his drawings of urban types—including well-dressed women and city workers—Seurat reduced his figures’ bodies to geometric forms and took them out of their contexts while still offering crucial details of their role in the urban panorama (see, for example, Nurse (c. 1882), Woman in White and Black, (c. 1882), and Market Porter [c. 1882-84]). In this way, he unites the modern and the classical, creating figures with the forms of ancient sculpture but the gestures and attributes of nineteenth-century Parisians.

Toward the end of his career Seurat focused on scenes of popular entertainment, showing the array of amusements—acrobats, clowns, circus performers, singers—available to city dwellers. These works include nine drawings devoted to the café-concert—cafés that featured singers and other performers for an audience drawn from the varied strata of Parisian society.

Seven of the drawings were included in this exhibition and each one offers a slightly different view of a performer (or performers) on stage, from close-up to long views to vantage points deep in the crowded audience, as seen in 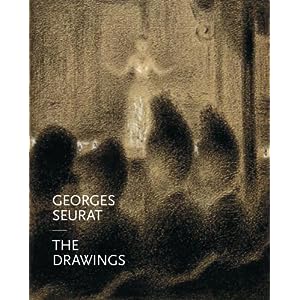 Posted by Jonathan Kantrowitz at 9:57 AM