On 31 January, Christie’s New York will present the sale of Old Master & Early British Drawings & Watercolors, which will offer works of remarkable quality and rarity from several North American private collections. A highlight of Old Masters Week, the sale is comprised of over 160 works, offering one of the strongest selections in recent years at Christie’s New York. Exceptional examples of European drawings from the 16th to the 19th centuries will be offered, with highlights including masterpieces by Parmigianino, Claude Lorrain, François Boucher, Jean-Antoine Watteau, Thomas Gainsborough, Théodore Géricault, and Jean-Auguste-Dominique Ingres. This Old Master Drawings sale is expected to realize in excess of $6 million.

Property from a Distinguished Private Collection includes 19 lots of drawings and watercolors of exceptional quality, from the 16th to the 19th centuries. With an emphasis on figurative compositions, this diverse collection of works by artists such as Parmigianino, Thomas Gainsborough, Giovanni Battista Tiepolo, and Théodore Géricault is united by each works’ rarity and importance. Highlighting the collection is Jean-Auguste-Dominique Ingres’ magnificent large-scale portrait of 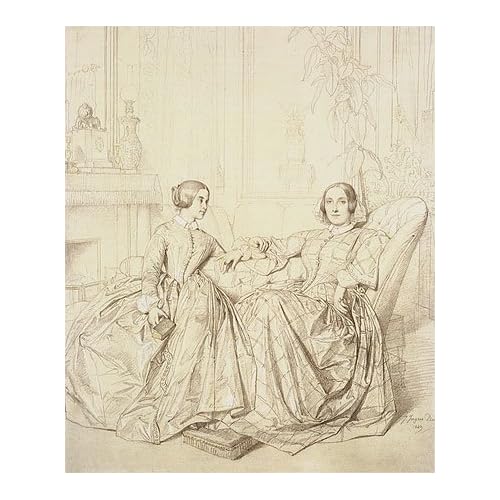 Comtesse Charles d’Agoult, née Marie de Flavigny, and her daughter Claire d’Agoult, which was executed in 1849 (estimate: $1,500,000-2,500,000). During this period, Ingres was taking on fewer and fewer portrait commissions, as large-scale paintings were fulfilling his ambitions, and during the spring and summer of 1849 he was preoccupied with the illness and the sudden death of his beloved wife Madeleine. These circumstances coupled with the large size of the drawing make it a rare example from his later Paris period.

Giovanni Battista Tiepolo’s Punchinelli Preparing a Meal of Gnocchi and Parmesan Cheese (estimate: $300,000-400,000) is one of just two dozen documented drawings by the artist of the commedia dell'arte character Punchinello. Tiepolo’s subject matter was likely inspired by the traditional regional festival, venerdì gnoccolare, during which the entire town of Verona would convene in the piazza, eat gnocchi, and drink until dawn. The present drawing is among the finest, most elaborate, and most ambitious dedicated to the subject of Punchinelli and gnocchi.

Parmigianino’s Head of a Bearded Man in Profile Facing Left, Possibly a Self-Portrait was likely sketched near the end of the artist’s time spent in Rome (1524-1527), when he was studying the works of Raphael and working with those who had worked in his studio (estimate: $300,000-500,000). While the identity of the sitter cannot be confirmed, the figure represents remarkable similarity to a confirmed self-portrait by the artist, presenting the likely possibility that the subject is Parmigianino himself. Also a work of exceptional provenance, the drawing has been included in two of the greatest drawings collections ever formed in Britain: those of the Earl of Arundel and the Duke of Devonshire. It was last sold in 1984 at Christie’s London in the historic sale of Old Master drawings from The Duke of Devonshire and the Chatsworth Settlement Trustees.

Théodore Géricault’s black chalk and pencil double-sided study for the Raft of the Medusa is among the most iconic works to be featured in the sale (estimate: $300,000-400,000).

A Romantic masterpiece, the painting (acquired by the French state in 1824 and now in the Louvre, Paris) has securely established itself in the annals of art history, depicting one of the most notorious scandals of the time. Following a national cover-up by the French government of a horrific shipwreck, one of the survivors eventually published a book on his experience, leading to a national uproar and Géricault’s decision to begin work on the scene. The recto of the present drawing is a study for a pivotal figure in the painting, that of the father holding his deceased son, who acts as both the emotional and visual anchor of the composition. The verso depicts two studies of the seated man next to the father. These preparatory studies related to The Raft of the Medusa are the building blocks of a masterpiece. The thoroughness with which the composition was conceived belies the Romantic notion of an artist inspired in a moment of genius, but, rather, reveals Géricault to be a meticulous master.

The exceptionally rare Portrait of Caroline, 4th Duchess of Marlborough, Half-Length, in a Blue and White Dress by Thomas Gainsborough is one of only seventeen pastel portraits by the artist and has remained in exquisite condition (estimate: $400,000-600,000). Gainsborough painted several family portraits for the sitter’s father and the intimate and personal mood of the pastels is in keeping with the fact that these portraits were not executed as formal commissions but as personal gifts from the artist to the sitters.

Property from an Important Canadian Collection, which is comprised of 70 works of mostly French and Italian 18th century drawings, includes

François Boucher’s exquisite Study of a reclining female nude, with both arms leaning right (estimate: $150,000-250,000). The red and white chalk drawing relates to the overdoor painting Venus feeding cupid with nectar, originally commissioned by the duchesse de Mazarin for the hotel Mazarin circa 1736-37. Until its appearance in the 1975 sale, this drawing was known only through its counterproof, formerly in the David Daniels collection and now also being offered in this sale.

A magnificent drawing of a wooded vista of the Roman countryside on blue paper is one of the most lyrical and accomplished of Claude Lorrain’s pure landscape sketches (estimate: $500,000-800,000). The drawing is not linked to any of Claude’s completed paintings and is typical of his plein air landscape sketches. It was once part of the so-called Wildenstein album, a group of 81 drawings formerly in a bound album, which comprised some of the finest examples of Claude figurative and landscape drawings. The drawing also has a remarkable provenance, having once belonged to Queen Christina of Sweden (1629-1689). The sheet subsequently passed to her heir, Cardinal Decio Azzolini (1623-1689) and was then sold to Livio Odescalchi, Duke of Bracciano (1652-1713). The drawing was later owned by John Gaines, one of the great 20th century collectors of Old Master Drawings, and was acquired at a 1986 auction by the present owner.

Two studies of a young child standing, and another of a young girl seated by Jean-Antoine Watteau can be dated to circa 1716-1717 and is being offered from a private American collection (estimate: $500,000-700,000). The figures were included with some variation in at least five compositions by Watteau, including a small painting on copper entitled La Déclaration, which will also be offered during Old Masters Week at Christie’s. The drawing is characteristic of the artist and wonderfully display his mastery of the trois crayons technique, which was derived from Rubens in the 17th century and reached its zenith with its employment by Watteau.

Posted by Jonathan Kantrowitz at 12:21 PM