The late-blooming career of Henri Rousseau (1844-1910), a self-taught French artist and savvy connoisseur of popular culture in the late 19th century, was showcased in the first major American retrospective of the artist’s work in 20 years. Henri Rousseau: Jungles in Paris, on view at the National Gallery of Art, East Building, July 16 through October 15, 2006—the only U.S. venue—celebrated the broad range of his work: landscapes of Paris and environs, allegories, portraits, as well as the largest grouping ever assembled of his iconic jungle paintings. An extensive display of more than 100 documents, popular ephemera, and other source material shed light on Rousseau’s artistic ambitions, working method, and the world he inhabited. The exhibition was on view at Tate Modern, November 3, 2005 through February 5, 2006, and the Galeries nationales du Grand Palais, March 15 through June 19, 2006.


The exhibition was organized by Tate Modern, London, and Réunion des musées nationaux and Musée d’Orsay, Paris, in association with the National Gallery of Art, Washington.

Born in the market town of Laval, France, Henri Rousseau moved to Paris in 1868 and remained there for the rest of his life. He served as a customs clerk on the outskirts of the city, a post which earned him the nickname “Le Douanier” (the customs agent).

A self-taught artist, Rousseau was unable to paint full time until his early retirement in 1893. Despite these unfavorable circumstances, Rousseau had grand ambitions, hoping to join the refined artists of the conservative French Academy. As an outsider, Rousseau was unfamiliar with the rules of the artistic establishment.

Although he worked in traditional genres, producing landscapes, portraits, allegories, and exotic scenes, they were transformed in his hands, made odd in a way that provoked ridicule by traditionalists. Often Rousseau turned to the popular culture of his time and class—illustrated magazines, dime-store adventure novels, postcards, and photographs—integrating its dramatic subjects and bold graphic style into his paintings

Rousseau was best known for his bold pictures of the jungle, overflowing with flora and fauna. But this painter of exotic locales never left France; his exotic paintings were the concoctions of a city dweller, shaped by visits to the botanical gardens, the zoo, colonial expositions, and images of distant lands seen in books and magazines.

Towards the end of his life, Rousseau was championed by a younger generation of avant-garde painters, writers, and their associates, including Pablo Picasso and the poet Guillaume Apollinaire, who saw in his work new possibilities for the future in his work. In 1911, the year after his death, the Salon des Indépendants celebrated his achievements with an exhibition of more than 40 paintings.

The exhibition was organized thematically, as follows: Tiger in a Tropical Storm (Surprised!) (1891) was Rousseau’s first jungle picture. The subject matter of this work was not unusual for the time, but Rousseau’s style—its bold lines and flat planes of bright palette color—provoked mostly negative reviews, and it was more than a decade before he returned to the jungle theme.

Filled with both enchantment and menace, Rousseau’s earliest exhibited works— and Rendezvous in the Forest (1889)—introduced mysterious images of costumed figures, strangely situated in forests.

Although Rousseau directed most of his efforts toward large-scale canvases for Salon submissions, he needed to sell paintings to support himself. Rousseau chose subjects designed to appeal to his petit-bourgeois clientele, who wanted familiar scenes to decorate their homes. In these modest pictures, the artist offers a tranquil vision of Paris, accented with signs of modernity, but free from the chaos of the modern metropolis, as can be seen in

Rousseau, like many of his social class, supported the government of the newly formed Third Republic. He courted its cultural authorities with patriotic allegories, such as

The Representatives of Foreign Powers Coming to Greet the Republic as a Sign of Peace (1907). In A Centennial of Independence (1892), the colorful group of dancing figures was borrowed from an illustration in Le Petit Journal, for which Rousseau served briefly as a sales representative.

Rousseau’s portraits represent some of his most unsettling paintings, inhabited by fiercely independent children in To Celebrate the Baby (1903); sitters given peculiar, unexplained props in Portrait of Monsieur X (Pierre Loti) (c. 1910); and familiar subjects with odd expressions in Portrait of the Artist’s Second Wife (1900-1903). Several portraits depict the most important women in his life: his first wife, Clémence, who died in 1888, in Portrait of a Lady (1895-97), and the Polish Yadwigha in Portrait of a Woman (1895), an early love and a recurring figure in his exotic works.

In contrast to the solitary tiger seen in Tiger in a Tropical Storm (Surprised!), (above) Rousseau’s later jungle animals often appeared as social creatures, even as human stand-ins.

Fight between a Tiger and a Buffalo (1908) shows the central beasts locked in struggle, while in

The Merry Jesters (1906) monkeys play with back scratchers and a milk bottle.

As his contemporaries recognized, there was nothing realistic about Rousseau’s jungles: he freely mixed flora and fauna from different environments, and transformed species to create fantastic worlds. 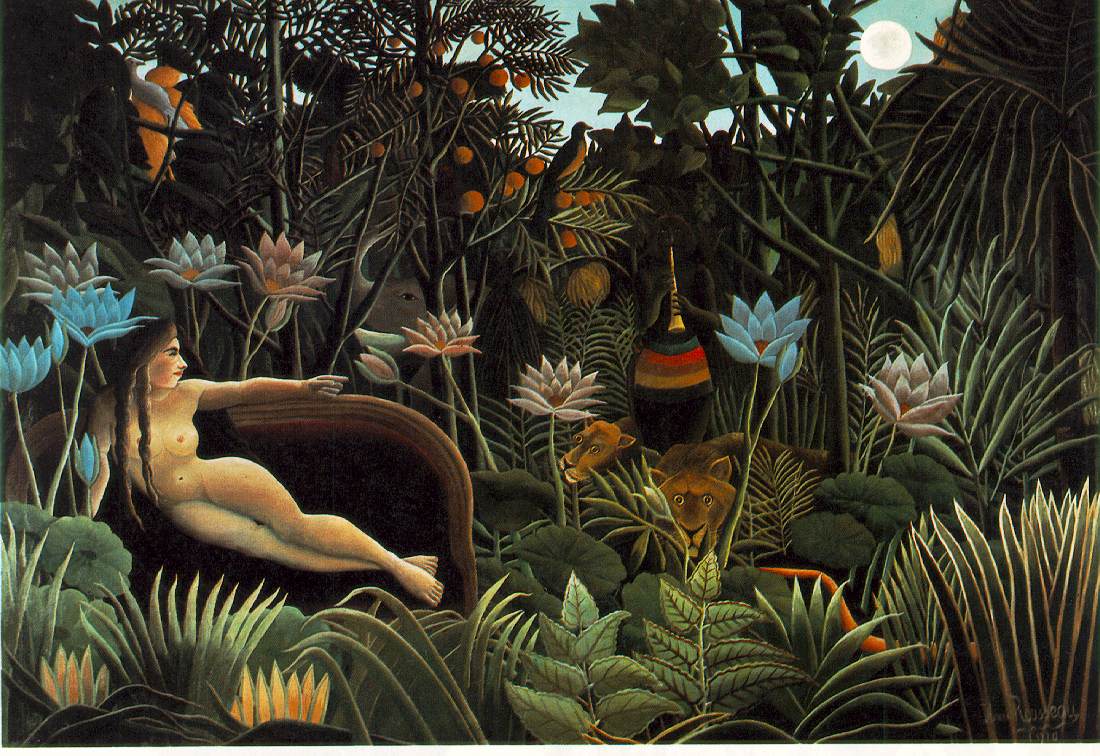 The Dream (1910), depicting a nude woman reclining on a velvet couch in the jungle, brings together the domestic and the exotic; the work mystified much of its audience but won the acclaim of the avant-garde.

The Exotic in 19th-Century Popular Culture:

Against the backdrop of colonial expansion, France witnessed a growing fascination with the exotic. Rousseau’s jungle paintings draw upon the French popular understanding of these far-off places and cultures. Rousseau was a frequent visitor to the Museum of Natural History and the Jardin des Plantes (the surrounding zoo and botanical gardens) as well as numerous colonial expositions held in Paris in the last decades of the 19th century. He was also an eager scavenger of images from a variety of printed sources, which he adapted and transformed in his paintings. 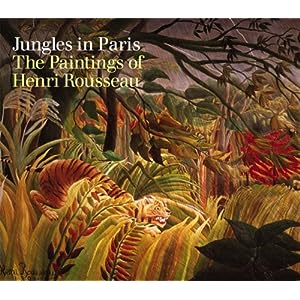 Published by Harry N. Abrams, the catalogue includes essays by Green, Morris, Ireson, Gille, Frèches-Thory, as well as John House, Courtauld Institute of Art, and Pascal Rousseau, University of Lausanne. The essays offer a comprehensive overview of Rousseau’s career as well as insights into the sources that inspired his work. The catalogue also includes previously unpublished reproductions of his sources alongside his paintings.

Posted by Jonathan Kantrowitz at 7:28 AM