The Springtime of the Renaissance. Sculpture and the Arts in Florence, 1400-1460


Palazzo Strozzi will present The Springtime of the Renaissance; Sculpture and the Arts in Florence, 1400-1460, an exhibition which sets out to illustrate the origin of what is still known today as the “miracle” of the Renaissance in Florence predominantly through masterpieces of sculpture, the form of figurative art in which it was first embodied. Following its debut in Florence, where it will be on view from 23 March to 18 August 2013, the exhibition will be shown at the Musée du Louvre in Paris from 23 September 2013 to 6 January 2014.

The lengthy preparation that has gone into the staging of the exhibition, which is curated by Beatrice Paolozzi Strozzi, director of the Museo Nazionale del Bargello, and Marc Bormand, curator-in-chief of the Département des Sculptures in the Louvre, has been accompanied by an extensive restoration campaign in both Italy and France with joint funding from the Fondazione Palazzo Strozzi and the Louvre. Visitors to the exhibition will be able to admire many Renaissance masterpieces, including works by Ghiberti, Donatello, Dello Delli, Filippo Lippi, Nanni di Bartolo, Agostino di Duccio, Michelozzo, Francesco di Valdambrino and Mino da Fiesole, in their newly-conserved splendour.

One of the most significant projects undertaken for this exhibition is the conservation of Donatello’s imposing bronze statue depicting St Louis of Toulouse, 1425, from the Museo dell’Opera di Santa Croce where it has been throughout the restoration in a workshop especially set up in the museum and open to the public. The conservation was entrusted to Ludovica Nicolai, who was responsible for restoring Donatello’s David in the Bargello, with the assistance of the Opificio delle Pietre Dure’s scientific laboratory. The procedure was directed by Brunella Teodori, Soprintendenza Speciale PSAE e per il Polo Museale della città di Firenze.

The exhibition will be presented in ten theme-based sections.

Section I: The Legacy of the Fathers

It opens with an intriguing overview of the rediscovery of the classical world with some splendid examples of the 13th and 14th century works by Nicola and Giovanni Pisano, Arnolfo, Giotto, Tino di Camaino and their successors, who also assimilated the expressive richness of the Gothic style, in particular from France.

Section II: Florence 1401. The Dawn of the Renaissance

The ‘new era’ coincided with the start of the new century and is represented in the exhibition by two panels depicting the Sacrifice of Isaac by Lorenzo Ghiberti and Filippo Brunelleschi from the Baptistry doors, and Brunelleschi’s model for the cathedral dome. At that time, the writings of the great Humanists, singing the praises of the Florentine Republic’s political achievements, its economic power and its social harmony, were spreading the legend of Florence as heir to the Roman Republic and as a model for other Italian city-states. 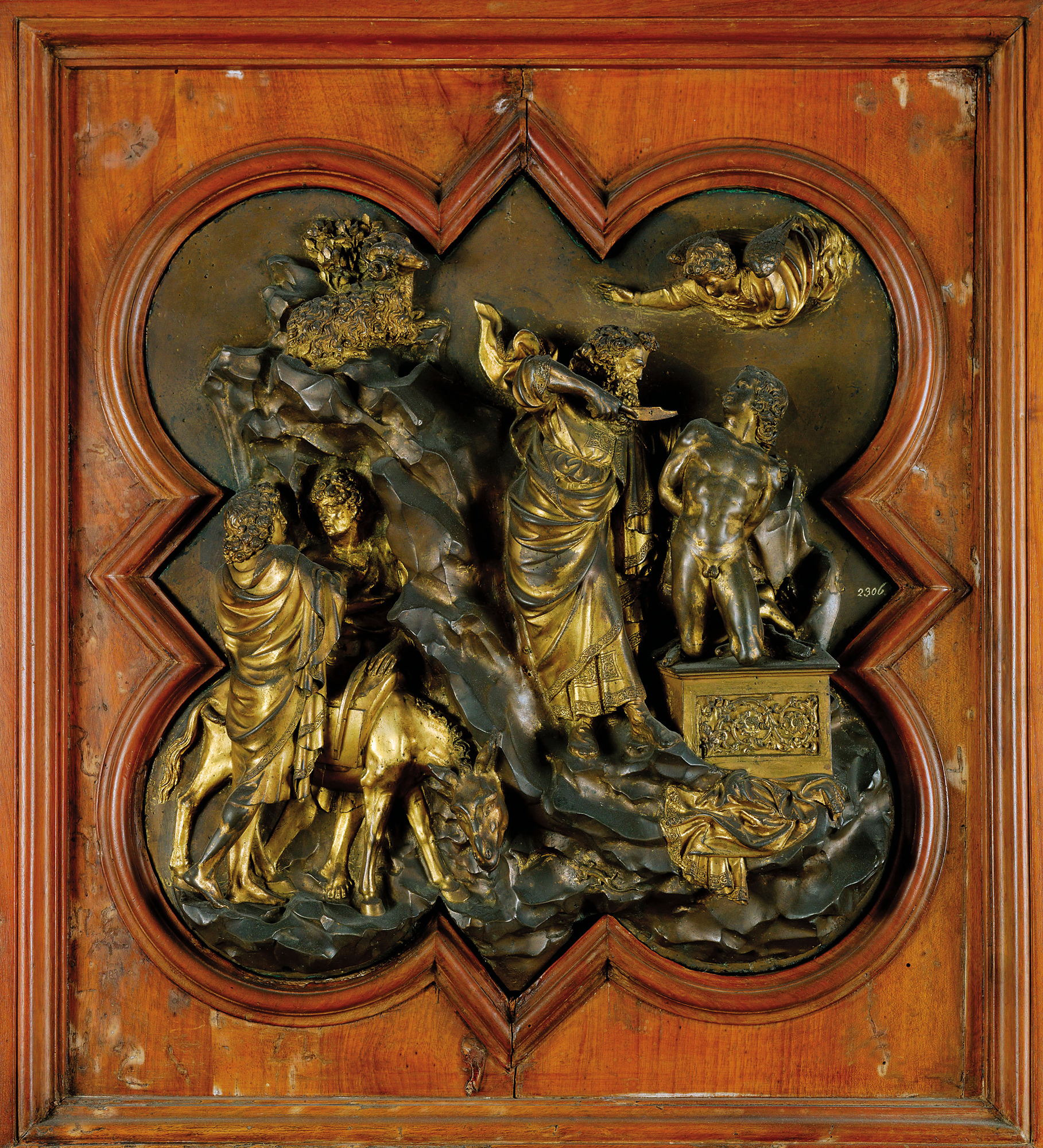 
Monumental public sculpture, through the masterpieces of Donatello, Ghiberti, Nanni di Banco and Michelozzo, created for the city’s major construction sites – the Cathedral, the Bell Tower, Orsanmichele – is the first and loftiest expression of the transformation under way and of the triumph of Florence and its civilisation. 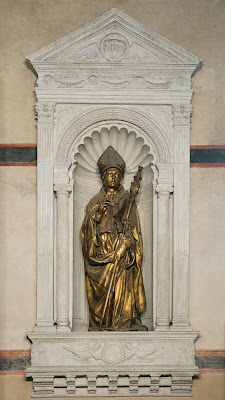 
Section IV: “Spirits” Both Sacred and Profane; Section V: The Rebirth of the Condottieri


The exhibition also sets out to illustrate the other themes of classical antiquity that were assimilated and transformed through sculpture in this new Renaissance language, which lent its voice not only to the city’s creative fervour but also to its spiritual and intellectual mood.


Sculpture, and more especially statuary, was thus to have a tremendous impact on the painting of the leading artists of the time, men such as Masaccio, Paolo Uccello, Andrea del Castagno, Filippo Lippi and Piero della Francesca. 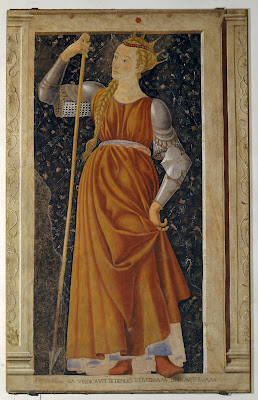 The search for a “rational” space and Brunelleschi’s discovery of perspective were implemented in the most advanced forms in the art of sculpture, in Donatello’s bas-reliefs – for instance in the predella of his St George from the Bargello or in his Herod’s Banquet from the Musée des Beaux-Arts in Lille. This echoed well into the middle part of the century in the work of Desiderio da Settignano and Agostino di Duccio in an ongoing dialogue/debate with painting, including that of the classical era.

Section VIII: The Spread of Beauty


From the 1420s onwards, the new standards of sculpture perfected by the great masters and illustrated in the exhibition by several masterpieces such as Donatello’s Pazzi Madonna from Bode Museum in Berlin, the Kress Madonna from the National Gallery in Washington, and the Madonna from the Diocesan Museum of Fiesole attributed to Brunelleschi, spread out via a seemingly endless output of bas-reliefs for private devotion (in marble, stucco, polychrome terracotta and glazed or “Della Robbia” terracotta), which fostered the widespread propagation of a taste for the ‘new’ beauty in every level of society.


At the same time, the most prestigious artistic commissions in Florence, which were almost always from public entities, began to focus on venues of solidarity and of prayer (churches, confraternities and hospitals), where sculpture once again played a primary role.

Section X: From City to Palace. The New Patrons of the Arts


Thus, arranged around the city’s absolute symbol – the wooden model of Brunelleschi’s Cupola for Santa Maria del Fiore – the exhibition offers a retrospective of themes and types of sculpture that were also to have a crucial impact on the development of the other figurative arts, in a direct debate with their classical predecessors, from the tombs of the Humanists, to the inspiration provided by ancient sarcophagi, to the rebirth of the equestrian monument and the carved portrait. The carved portrait, which became popular towards the middle of the century – in the marble busts of Mino da Fiesole, Desiderio da Settignano, Antonio Rossellino and Verrocchio – heralds the transition from the fiorentina libertas, represented by public patrons, to the private patronage that already bore the mark of the Medici family’s impending hegemony. This transition is effectively captured in the culmination at the end of the exhibition with the Wooden Model of Palazzo Strozzi, the most illustrious private residence of the Renaissance.

The exhibition is promoted and organised by the Fondazione Palazzo Strozzi, the Musée du Louvre, the Ministero per i Beni e le Attività Culturali (in particular, the Museo Nazionale del Bargello – Soprintendenza PSAE e per il Polo Museale della città di Firenze), with the participation of the Comune di Firenze, the Provincia di Firenze, the Camera di Commercio di Firenze and the Associazione Partners Palazzo Strozzi.

Numerous leading museums in Europe and the United States have been immensely generous in terms of the magnitude and importance of the loans that they have granted (particularly the Victoria and Albert Museum in London, the Bode Museum in Berlin and the National Gallery of Art in Washington, in addition to the Louvre), as indeed have the institutions, churches and museums of Florence – not only the Museo Nazionale del Bargello but also the Opera e Museo di Santa Maria del Fiore, the Opera di Santa Croce and the Museo di Orsanmichele, in particular – which will also provide visitors to the exhibition with the opportunity to prolong their exploration of the history and art of the Early Renaissance in Florence.

The catalogue, edited by Beatrice Paolozzi Strozzi and Marc Bormand and jointly published by Mandragora Editore Firenze and the Editions du Louvre in Italian, French and English, will contain contributions from many of the leading Italian and foreign experts in the field of Quattrocento art, with numerous theme-based essays and with scholarly entries for each of the exhibits.

This first joint venture between the Fondazione Palazzo Strozzi and the Musée du Louvre confirms the international reputation for excellence successfully built up by Palazzo Strozzi and its exhibition programme.
Posted by Jonathan Kantrowitz at 2:35 PM