and an outstanding example of Miró’s important post-war paintings, Femme revant de l’evasion of 1945 (est. £8-12 million) that comes to auction for the first time in 50 years from the Wallach Collection.


Picasso’s stunning and monumental depiction of Marie-Thérèse Walter, Femme assise près d’une fenêtre of 1932 is one of the artist’s most iconic images and part of the defining series which introduced his ‘golden muse’ to the public eye. The story of Picasso’s first encounter with Marie-Thérèse – in 1927 when she was seventeen years old – and their subsequent love affair, is among the most compelling in 20th – century art history. Picasso’s young lover Marie-Thérèse became a primary emblem of love, sex and desire in 20th century art. At first her presence in Picasso’s works was veiled or coded as the artist was at the time married to Olga Kholklova, but when portraits of Marie-Thérèse hung – for the first time – alongside Cubist and Surrealist works in the major Picasso retrospective of 1932 at Galerie Georges Petit in Paris and at the Kunsthaus in Zurich, Picasso’s secret came out. Upon seeing Picasso’s numerous references to a specific face that was clearly not her own, Olga Khokhlova was suddenly alerted to the presence of a new woman in her husband’s life.


Claude Monet’s monumental Nymphéas avec reflets de hautes herbes (est. £12-18 million), which dates from 1914-17, is a powerful testament to the artist’s enduring vision and creativity in his mature years. Possibly one of the most iconic images of the Impressionist movement, the significance of the theme of waterlilies in the development of modern art is now fully recognised. This painting led to the celebrated Grandes decorations, now in the Musée de l’Orangerie in Paris, which are according to renowned dealer and scholar Daniel Wildenstein, ‘the crowning glory of Monet’s career, in which all his work seemed to culminate’.

Miro's Femme revant de l’evasion is a large-scale work executed in 1945 at a time at which the artist was at the height of his international acclaim. The painting depicts the figure of a woman against a light background and uses the vocabulary of signs developed by Miró in his celebrated Constellations series a few years earlier. The large-format image is rendered with a precision and elegance characteristic of Miró’s best works. It is the only work that remains in private hands from an exceptional series of oils produced between late January and late February of 1945, and was acquired by the Wallach family just a year after it was executed directly from Miró’s dealer Pierre Matisse. The other paintings in the series are held in major international museums worldwide, including at the Solomon R. Guggenheim in New York.

Further works to be offered in this sale include

EXCEPTIONAL WORKS ON PAPER BY EGON SCHIELE FROM THE LEOPOLD MUSEUM, VIENNA

From the Leopold Museum in Vienna, Sotheby’s will offer one of the most important groups of work on paper by Egon Schiele ever to come to the market. The three works carry a combined estimate of £9-12 million and are led by the exceptional Liebespaar (Selbstdarstellung mit Wally) / Lovers (Self Portrait with Wally), 1914 (est. £6.5-8.5 million). Executed in gouache and pencil, this transfixing double portrait of the artist with Wally - his model and lover - ranks among the finest works on paper by Schiele ever to have come to the market. With its lavish colours and bold confrontational manner, it takes the viewer to the heart of the emotional turmoil involved in the ending of a long and intense relationship.

Also to be offered is the self-portrait

Vor dem Ball (Zwei Frauen mit Katze) by Max Beckmann (est. £5-8 million) is an
intensely evocative work painted in 1949 during the first year of the artist’s living
in New York, where his arrival made a profound impact upon the burgeoning
artists of the time. Whereas Beckmann’s pre-war Frankfurt works remark on the
hardships of Weimar Germany, Beckmann’s American paintings are celebrations
of liberty. Inspired by its multi-strata society, Beckmann sought out the city’s
most iniquitous spots, populating his work with the cast of characters he
encountered there. Here, the mysterious intensity of the two women appears to
derive from the uncertain propriety of their setting. Relating to their counterparts
in the artist’s monumental triptychs - actors, dancers and clowns – they express
Beckmann’s dramatic vision of the modern metropolis. 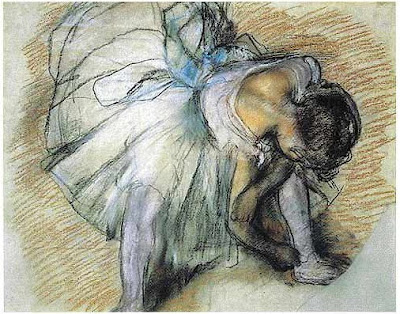 Danseuse ajustant son chausson of 1887 by Edgar Degas (est £3-5
million) exhibits a composition that derives from one of the most
dynamic and remarkable poses to figure in the artist’s work. It
symbolises much of what attracted the artist to depicting the dance
and frequently features as the focus of his finest compositions. The
work’s depiction of a dancer bent forward over her shoe is a feature of
seminal works from the 1880s, such as L’Attente and Danseuses au
Foyer, housed in the Getty and The Metropolitan Museum of Art
respectively.

Après le bain, femme s’essuyant, c.1882-85 (est £2.5-3.5 million) is a
remarkable pastel on one of Degas’ favourite themes is. The extraordinary
energy and modern quality are derived from the highly abstracted treatment
of the surface, blending the fabric of the wall-paper, curtain, screen, floor,
robe and towel into a continuous decorative pattern. The work remained in
the artist’s collection until his death in 1917, and was included in the first of
the auctions of Degas’ studio contents the following year.

Claude Monet’s magnificent snow scene Le Givre à Giverny (est. £4-6 million).depicts the frost-covered trees at Giverny, the town on the Parisian outskirts which would become synonymous with Monet’s most innovative compositions. The painting is one of Monet’s first significant depictions of his new surroundings, belonging to an important series of early 1885. Monet’s progression towards a more radicalised depiction of the natural world is keenly felt in the dynamic handling of paint – a sensory montage of colours and textures.


The selection of sculptures to be offered is highlighted by Working Model for
Reclining Woman: Elbow by Henry Moore (est. £1.2-1.8 million), which was
executed in 1981 in preparation for the monumental Reclining Woman: Elbow of
the same year – the work that was chosen by Moore for display at the entrance
of the Moore Sculpture Gallery in Leeds on its inauguration by Queen
Elizabeth II in 1982. The single most iconic image in Henry Moore’s oeuvre, the
reclining figure subject has been described as ‘a kind of vessel into which Moore
poured his most important poetic, compositional, formal and spatial discoveries.’
Posted by Jonathan Kantrowitz at 8:12 AM