AN AMERICAN IN LONDON: WHISTLER AND THE THAMES


The Addison Gallery of American Art, located on the campus of Phillips Academy in Andover, Mass., opens its winter exhibition season February 1 with a trio of new shows. An American in London: Whistler and the Thames, which runs through April 13, headlines the winter season, accompanied by two permanent collection exhibitions, Industrial Strength: Selections from the Collection and Eye on the Collection: Artful Poses.

An American in London is the first major exhibition to focus on Whistler’s time in London, during which the artist explored a radical new aesthetic approach to the subject of the city and the river, challenging the art establishment of the time. Born in Lowell, Massachusetts in 1834, James Abbott McNeill Whistler trained in art both in the United States and throughout Europe. After settling in London in 1859, Whistler immersed himself in the life of the city, with a particular focus on the bridges that crossed the Thames as it flowed through the center of London. Taken with the bustling industrial neighborhoods, he depicted the workers and women who frequented the riverside wharves and pubs, the barges that navigated the perilous passage under the bridges, and the steamboats and wherries crowded with daytrippers that paddled up and down Battersea Reach. 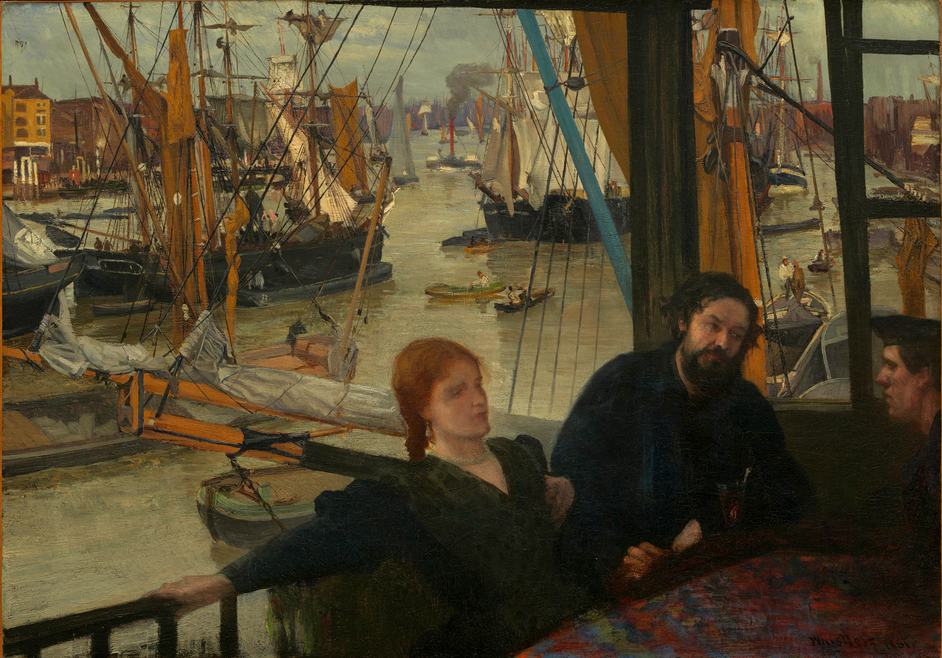 An American in London brings together more than 70 paintings, prints, and drawings from this pivotal period in Whistler’s career, providing a detailed examination of his approach to composition, subject, and technique. Throughout the exhibition, historical photographs and portraits of Whistler and his patrons complement Whistler’s work, bringing to life the neighborhood and people of his world and adding depth to the stories he depicted during this time.

Susan Faxon, Interim Director of the Addison, notes, “Although Whistler has been the subject of many exhibitions, An American in London provides the first focused examination of this important period in his career. We are delighted that the Addison’s 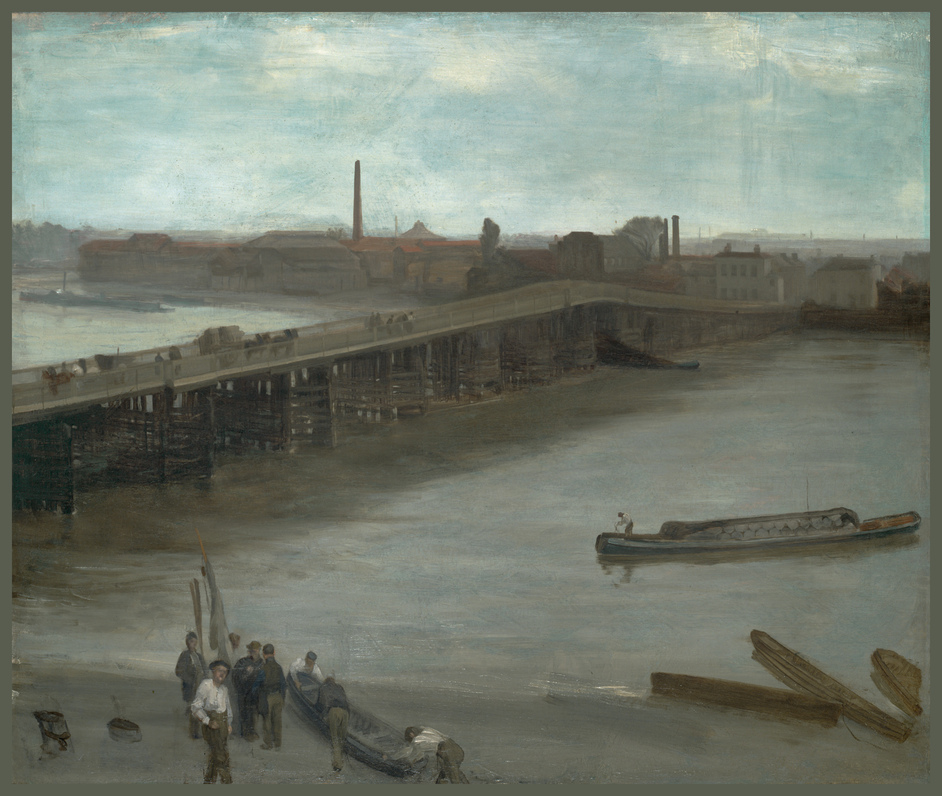 which was one of the first paintings Whistler completed after moving to London, will be shown in the context of his other extraordinary work exploring life along the Thames in the Victorian era.”

An American in London, curated by Margaret MacDonald, Professor Emerita of Art History, and Dr. Patricia de Montfort, both from the University of Glasgow, is accompanied by a fully illustrated catalogue.

The exhibition, first shown at the Dulwich Picture Gallery in London, will also travel to the

Key lenders to the exhibition include the Museum of Fine Arts, Boston; Metropolitan Museum of Art; National Gallery of Art, Washington, D.C.; Musée d’Orsay; the Art Institute of Chicago; and the British Museum.

James Abbott McNeill Whistler, Whistler with a Hat (1859). Etching © The Trustees of the British Museum

An American in London is organized by the Addison Gallery of American Art, Dulwich Picture Gallery, London, and the Freer Gallery of Art | Arthur M. Sackler Gallery, Smithsonian Institution.

Links to more images and information

From a review: (some images added)

A portrait of The Adam and Eve is a chance to witness remnants of Old Chelsea around the inn as a central subject, as well as a demonstration of Whistler’s evolving specialism.

Horizons are clear and strong, then disappear altogether behind spooky mists. The contrast between the densely-stilted details of and Blue and Gold, the gloom-smothered oil of barely discernible features which provoked such disdain from Ruskin, represents two remarkable views of the river’s past. 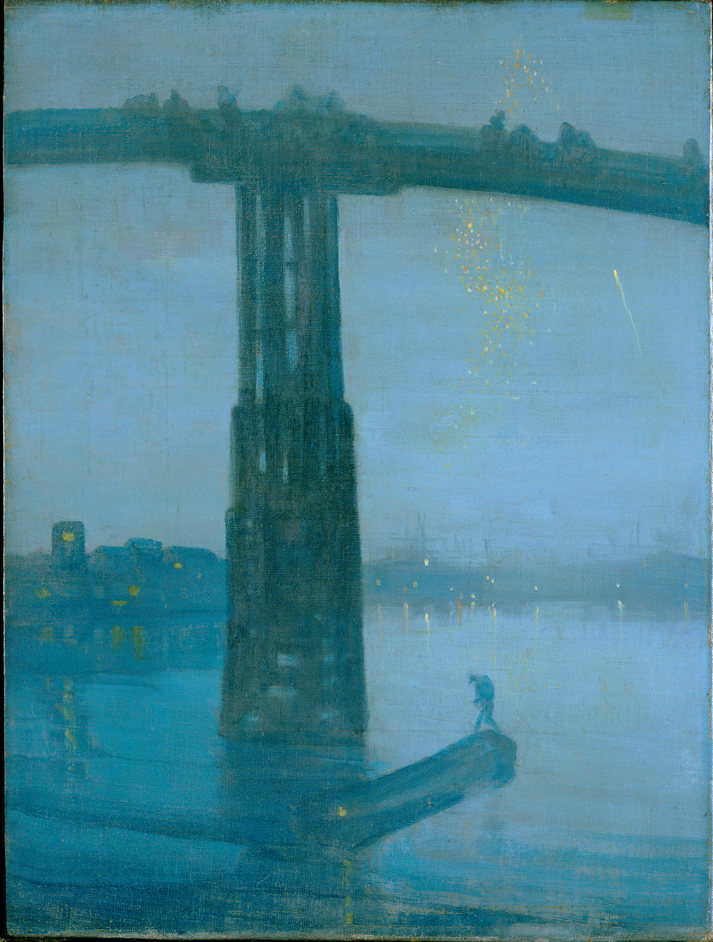 The former painting was shown at the Royal Academy to acclaim. Whistler would draw Battersea Bridge – a difficult one to navigate, and a place where drownings were not uncommon – from the shore and boats.

He described his nocturnes, which are almost uniformly grey and gold, or dark green on a warm summer night, as his attempts to solve puzzles within paintings, and would have first been inspired by Japanese paintings during the late 1850s, the country having been closed to trade before then.

As a complement to An American in London, the exhibition Industrial Strength: Selections from the Collection, on view through April 13, gathers works from the Addison’s permanent collection by artists, who like Whistler, have found inspiration in the industrial landscape. The work in the exhibition explores all aspects of the industrial scene, including laborers, factories, transportation, and infrastructure, through both series of works and individual pieces. Including a range of media and time periods, as well as abstract works that play with hard-edged forms and industrial materials, Industrial Strength features artists as diverse as Edward Hopper, Walker Evans, Margaret Bourke-White, O. Winston Link, Peter Vanderwarker, and Siah Armajani.

The exhibition Eye on the Collection: Artful Poses rounds out the Addison’s winter shows and runs through March 30. Featuring works from the 18th through 21st centuries, Artful Poses explores the many ways that portraits both capture the presence of an individual and reveal the shifting social and artistic contexts in which the works have been created. The gaze, garments, furnishings, and well-placed accoutrements—a flower held by a young girl, an open book, a ship in the background—all attest to the status, ambitions, and aspirations of the 18th-century sitter. Portraits from the 19th century, such as Henry Inman’s rosy-faced newsboy and Winslow Homer’s country school teacher, are set in a framework of time and place in scenes that transcend the physical attributes of the sitter. In the 20th century the primacy of photography freed artists in all media to use the portrait for artistic and social purposes. Diane Arbus’s awkward boy with a toy hand grenade and Roy DeCarava’s white-gowned graduate in the gritty urban backyard are tough, touching commentaries on the complexities of American life. Recent self-portraits by Chuck Close and Red Grooms that are both two- and three-dimensional use the idea of portraiture to create intriguing and playful works.


About the Addison Gallery of American Art

Devoted exclusively to American art, the mission of the Addison Gallery of American Art is to acquire, preserve, interpret, and exhibit works of art for the education and enjoyment of all. Opened in 1931, the Addison Gallery has one of the most important collections of American art in the country that includes more than 17,000 works by prominent American artists such as George Bellows, John Singleton Copley, Thomas Eakins, Winslow Homer, Georgia O’Keeffe, and Jackson Pollock, as well as photographers Eadweard Muybridge, Walker Evans, Robert Frank, and many more. The Addison Gallery, located on the campus of Phillips Academy in Andover, offers a continually rotating series of exhibitions and programs, all of which are free and open to the public. For more information, call 978-749-4015, or visit the website at www.addisongallery.org.


Posted by Jonathan Kantrowitz at 12:07 PM