Revered as one of the most emotionally powerful painters in modern art, Norwegian artist Edvard Munch (1863–1944) is also considered among the greatest printmakers of the modern period. Edvard Munch: Symbolism in Print, Masterworks from the Museum of Modern Art, New York traces the artist’s process of translating his personal meditations on the anxieties of life, sexuality, and death into graphic form in arresting etchings, lithographs, and woodcuts, often experimenting with the same image in more than one technique. The exhibition, which includes twenty-six of Munch’s signature prints, will be on view at the Princeton University Art Museum from February 8 through June 8, 2014.

“The repercussions of Munch’s achievement—his incisive commentary on the psychological tolls of modern life—continue to be felt throughout visual art and culture,” said Museum Director James Steward. “This exhibition reminds us that it is in his prints that we may find most forcefully the raw, unfiltered emotion of his images.”

A poetic visionary and master of the idiom, Munch was influenced by the emotional insights of Vincent van Gogh as well as the vibrant color and symbolic forms of Paul Gauguin, whose Tahitian woodcuts provided inspiration for Munch’s innovative development as a printmaker. Yet while Gauguin’s woodcuts evoked an imagined Polynesian idyll, Munch turned his prophetic vision inward, capturing what he perceived to be universal experiences of modern life and often drawing from personal memories of his often tragic past. In this way, Munch might incarnate better than any other artist the tenets of Symbolism, a movement that argued that art must reject rational naturalism and move beyond physical reality to embrace the imagination, dreams, and freedom from artistic convention. Best known for his painting The Scream (1893), seen by many as the perfect embodiment of modern-day psychic distress, Munch was in turn instrumental to the development of early twentieth-century European Expressionism. His vividly haunting images have resonated for more than a century, growing more relevant to contemporary sensibilities.

Often derived from his paintings, Munch’s prints concentrate on intensely remembered moments in his life, compelling viewers to confront themes of loneliness, lust, despair, and death. As Munch explored the emotional terrain of his life, he experimented with printmaking, unafraid to break the rules in order to more sharply realize his artistic vision. Because of the bare honesty of his imagery and his relentless inventiveness, Munch is acknowledged as one of the pioneering masters of modern art whose influence continues to be felt by artists today.

Munch has achieved rock star status with the recent sale of The Scream for almost $120 million. But he is “much more than the painter of a ludicrously expensive pop icon,” insists John Coffey, deputy director for art at the NCMA. “Munch is one of the towering image makers of modern times. His works probe the turbulent, even taboo reaches of the human heart with unflinching candor and compassion.”

Describing his artistic inspirations, Munch stated, “Without anxiety and illness I should have been like a ship without a rudder.” The artist’s anxious relationships—with his family, his lovers, and society as a whole—generate images that transcend one man’s experience and speak to universal human concerns.

Utterly consumed by his subject matter, Munch often created several versions of the same image. For example, the exhibition features two works titled The Kiss, depicting lovers in an embrace. One print is an etching; the other a woodcut. In the woodcut, the two figures are fused into a single identity—a terrifying notion to Munch. In a pair of woodcuts titled The Lonely Ones, Munch uses the same printing block carved with an image of a couple gazing out to sea. However, each print is inked in different colors, dramatically altering the emotional “temperature” of the scene.

From a review of the North Carolina show:

Many of the prints featured in Symbolism in Print, explore an apprehension towards women which began to emerge in the later half of the 19th century.

depicts three women who represent the three stages of a woman’s life: the naïve virgin, the brazen temptress and the regretful mother. This work ultimately represents the misogynistic understanding of the sexual evolution of women...Although not a stranger to a sordid love affair, the promiscuity of the female sex for Munch was both magnetic and a source of internal despair. His woodcut,

visually represents this despair as he depicts himself and his married lover losing physical features as the emptiness of the endeavor begins to take its toll. Refusing to part with his paintings, which he viewed as “his children,” his prints were his source of financial income and were often of his paintings.

From another review of that show:

(W)e learned that Munch was a sickly child who was intensely sensitive and fearful of the world around him. He was drawn to themes of sex (how one is swallowed up) and death (how it lurks behind life), and eventually devoted his later years to studying these topics through his artwork. As he studied and created art, he focused on expressing not simply a snapshot of what he thought, but the feelings that permeated these thoughts. He desired to capture the fear, pain, disgust, and sorrow that under-girded various moments. 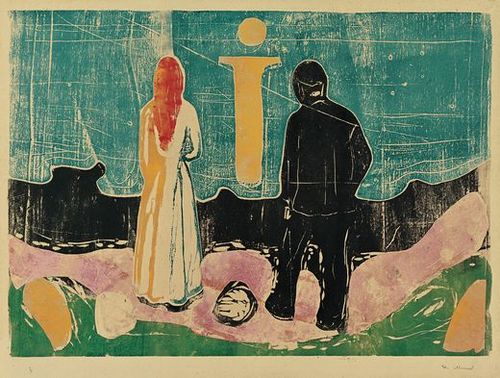 The print above, for example, is titled "The Lonely Ones," and reveals very simply the distance between two (possible lovers) even though they stand next to each other, and the distance they feel between themselves and the world. They contemplate this pervasive loneliness at the edge of the sea, by moonlight.


Munch's "The Sick Child" served this purpose. It depicts his sister Johanne Sophie on her deathbed, pale and drawn from tuberculosis. Painfully frail in profile against a white pillow, a shock of her red hair sticks up. Their mother sits by the bed, slumped over the child's hand.

Sophie's death in 1877, when she was just 15 years old and Munch a year younger, became his central trauma. Munch barely survived childhood tuberculosis himself and kept the chair his sister died in in his studio his whole life as both a talisman against death and a reminder of its constant proximity.

Symbolism in Print presents three versions of "The Sick Child," including the quintessential red lithograph from 1896 (as well as an image of the family gathered in sorrow entitled "Death in the Sickroom"). Rehearsing the excruciating tension of waiting for a loved one to die, as well as his sorrow and survivor's guilt, Munch completed six paintings of this image over a 40-year span. The 1885–86 version proved transformative. Munch scratched off and repainted his sister's face many times, trying to transfer the depth of his feelings into the image. Both the rawness of his expression and the effectiveness of his repetitive process were revelatory.

The three prints show Munch's adjustments. An 1894 drypoint includes a sketched landscape in a separate panel at the bottom. A tiny etching and drypoint from 1896 crops out Munch's mother, zooming in on Sophie's expressionless face against the pillow. In the red lithograph, which Munch considered his most successful print, his sister faces in the opposite direction from the other two prints.