A contemporary of the Impressionists, Manet (1832–1883) painted his family, friends and the literary, political and artistic figures of his day, often in casual settings rather than traditionally posed portraits. His subjects come to life on canvas, making the viewer curious to know more about these people and their lives.

Among his works on display were: Lady with a Fan (Jeanne Duval), 1862, from the Museum of Fine Arts in Budapest; The Monet Family in their Garden at Argenteuil, 1874, from the Metropolitan Museum of Art 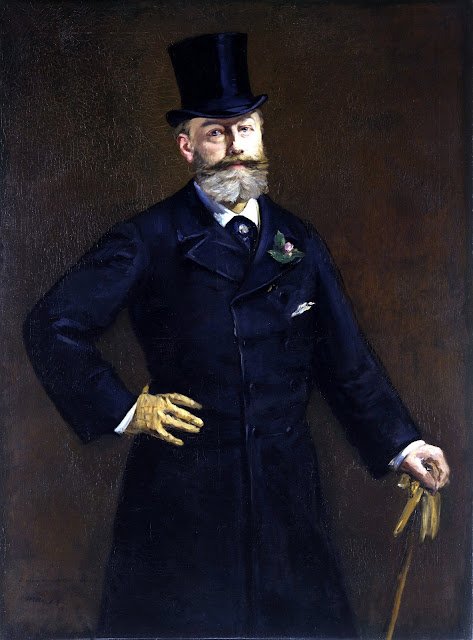 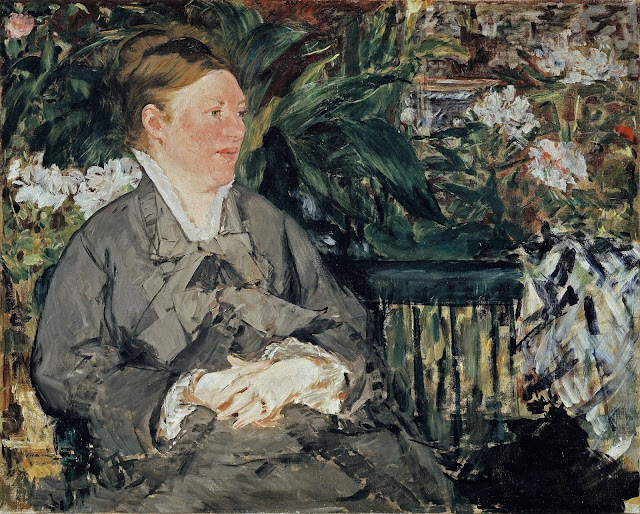 Édouard Manet, Mme Manet in the Conservatory, 1879 (The National Museum of Art, Architecture and Design, Oslo) Portrait of Emilie Ambre as Carmen (1880) , Philadelphia Museum of Art Luncheon in the Studio 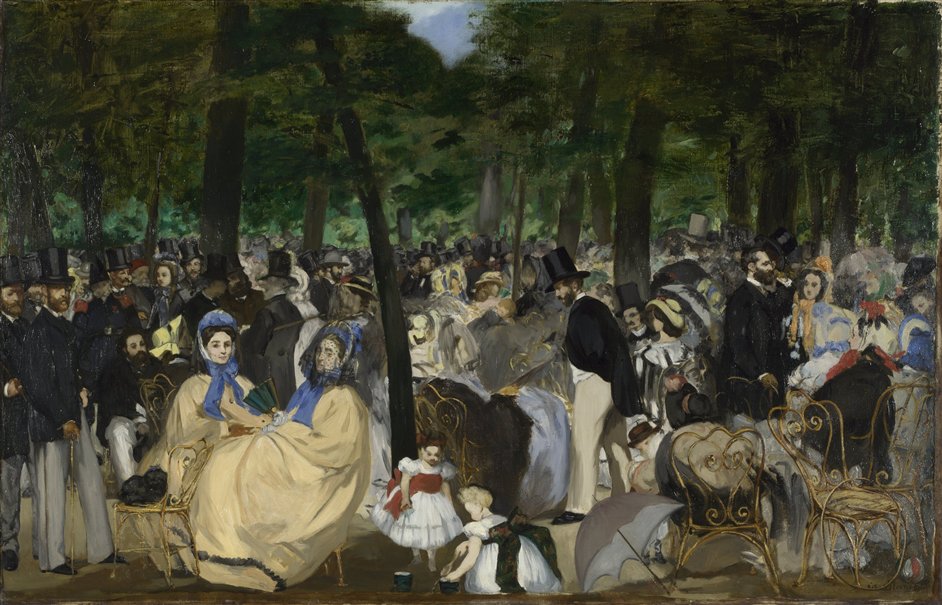 Music in the Tuileries Gardens,

From an outstanding review of the Royal Academy show (images added):

More relaxed is the 1880 impressionist portrait of Suzanne with a cat on her lap. Her illegitimate son appears in 1867's Boy Blowing Bubbles, a painting of wonderful plainness, with one hand raised as he blows a pendulous bubble from a pipe, the other proffering a bowl of soapy water. 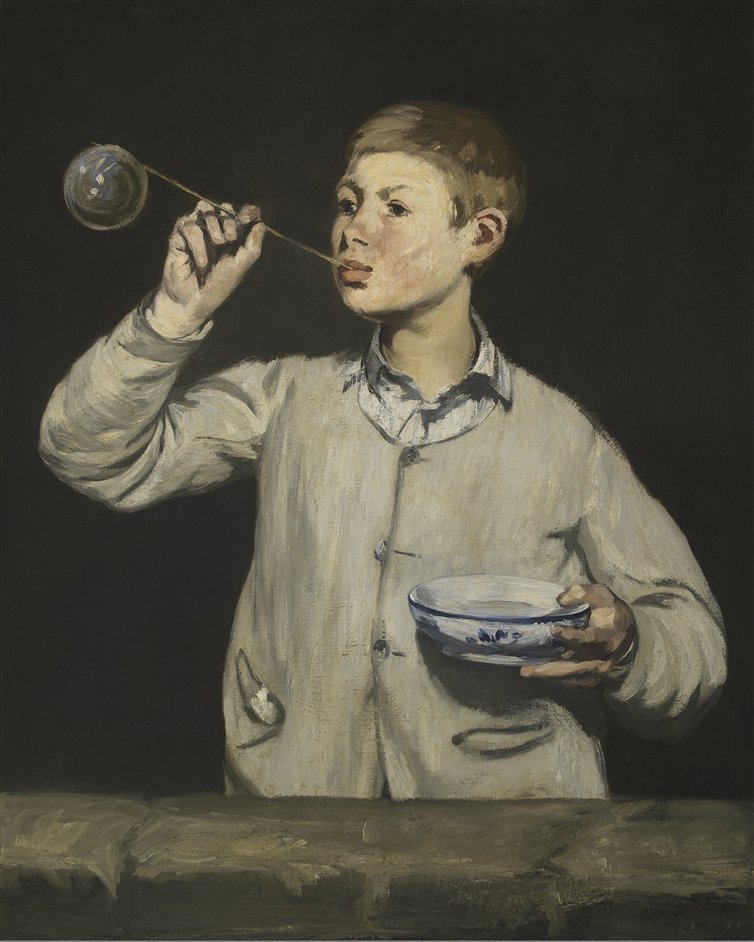 The work is as controlled as Chardin's paintings of the same subject. While the weightless bubble unbalances the entire composition, the whole thing is held in check by the little scrap of white rag or handkerchief peeking from the boy's pocket.

Such little details matter in Manet: the flaring whiteness of the pith in the halved lemon in the portrait of Zacharie Astruc, with its coil of yellow peel spiralling out of the picture; the sexy peach in a bowl on a corner of Zola's desk; Manet didn't just paint life, he painted from life, so everyone who appears is a kind of portrait. From the outrageous Déjeuner Sur l'Herbe (the smaller of the two versions, belonging to the Courtauld Gallery, is here) to smokers and bubble-blowers, from portraits of eminent writers to one of a lion-hunter, everyone is someone – even the anonymous Street Singer, from 1862. 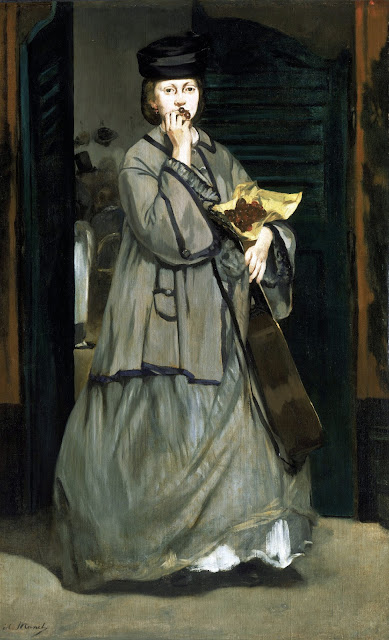 She emerges from a doorway not singing, but stuffing her face with grapes, which are as round and full as her eyes. The model is Victorine Meurent, whose portrait Manet painted the same year. What strikes you is how clear her gaze is, how solid an object her head is. In the portrait, she is both thing and person, and declaratively made of paint. The same can be said of the two portraits of artist Berthe Morisot, 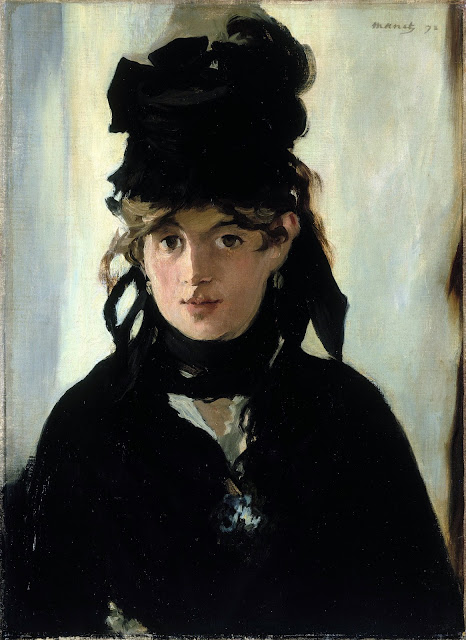 the later of which shows her in mourning. It is as if the first, beautiful portrait has collapsed, under not just the weight of her misery, but of paint itself. She seems to have imploded.