Sargent and Venice, a spectacular artist’s view of the fabled city, was shown in an exhibition that opened in January 2007 at Adelson Galleries in New York city.

John Singer Sargent (1856-1925), one of a few truly international artists of the 19th century, had a love affair with Venice: he traveled there numerous times over 40 years. Adelson Galleries in New York, noted for its expertise in American art and the work of John Singer Sargent in particular, has organized an exceptional loan exhibition, Sargent and Venice, comprising of approximately 60 oils and watercolors painted by the artist from the 1880s until 1913.

The exhibition was on view at the gallery from January 19 through March 3, 2007 and then traveled to the Museo Correr in Venice —marking the artist’s first-ever solo exhibition in that city—from March 24 through July 22, 2007.

A majority of the paintings shown are on loan from private collections and have rarely been on public view; several institutions, including the Brooklyn Museum, Philadelphia Museum of Art, The National Gallery of Art in Washington, D.C., the Royal Academy of Arts in London, and the Museo Thyssen-Bornemisza in Madrid, have loaned important works as well.

Inspired by the idea of retracing Sargent’s routes down the Venetian waterways, Warren Adelson, president of Adelson Galleries and the sponsor of the Sargent catalogue raisonné, saw this approach as a means to gather together the Venice pictures that appear throughout several volumes of John Singer Sargent: The Complete Paintings (Yale University Press).

It was the first such exhibition in New York (Adelson Galleries) and, remarkably, the venue at the Museo Correr in St. Mark's Square in Venice was the first exhibition of Sargent ever held in that magical place.

John Singer Sargent was born in Florence to American parents and lived most of his adult life in England. Widely recognized as the preeminent portrait painter of his generation, he felt equally at home in Europe and the United States where he painted many of the most notable social and political figures of his day. 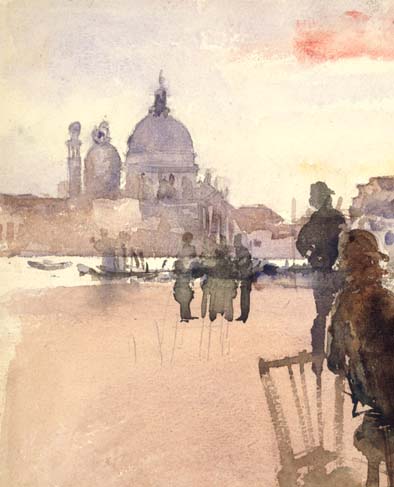 Detail,  Café on the Riva degli Schiavoni, Venice, ca. 1880-82'
After “Turner and Venice”,  Sargent and Venice was another show which charted a great artist’s response to the city and its lagoon. Venice was, in fact, the place best loved by John Singer Sargent (1856-1925), the most important of American ‘Impressionists’, who was born in Florence and lived for most of his life in Europe. 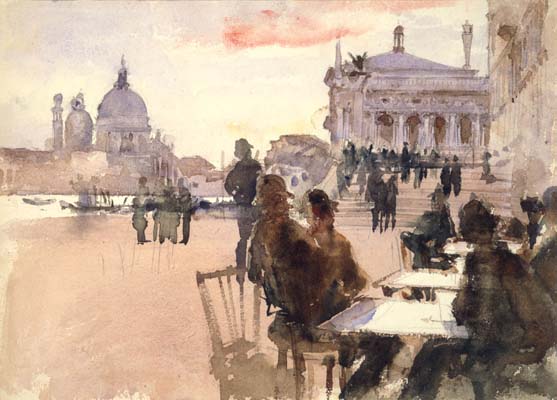 Housed within the neoclassical rooms on the first floor of the Museo Correr, the exhibition – curated by Warren Adelson, Elizabeth Oustinoff and Giandomenico Romanelli– was the fruit of collaboration between the Musei Civici Veneziani and Adelson Galleries of New York; it included approximately sixty works (paintings and watercolours) dating from 1880-1913. There were loans not only from the Brooklyn Museum, the Philadelphia Museum of Art, The National Gallery of Art in Washington, D.C., the Royal Academy of Arts in London and the Thyssen-Bornemisza in Madrid, but also from numerous private collections. Thus, the public had the opportunity to see masterpieces that are rarely if ever placed on public display.

Like J.W.Turner and other great nineteenth-century artists, Sargent was fascinated by Venice.
The man himself had grown up in cultured cosmopolitan circles in Italy, France, Spain, Switzerland and Germany. In Paris he had studied under Carolus-Duran and then enrolled at the École des Beaux-Arts before embarking on a career as a portrait-painter.

A friend of Monet’s, he would in the second half of the 1870s undertake a number of study trips, experimenting ever more extensively with peinture en plein air.

The exhibition layout was completed by an unusual and surprising section dedicated to such contemporary Venetian painters as Milesi, Tito, Selvatico and Nono. A leading figure in a number of Venice Biennales, Sargent undoubtedly had an influence on these men; but at times he himself may have been influenced by their work.


From a NY Times review of the Venice show (images added) :

Sargent was distantly related to the Curtises, an Anglo-American family that had taken up residence at Palazzo Barbaro on the Grand Canal. Both he and Henry James, a friend since the two men had met in Paris in 1884, stayed there on several occasions.

As a mark of his appreciation for the Curtises' hospitality during his visit in 1898, Sargent made an informal portrait in oils of the Curtis parents, Daniel and Ariana, their son Ralph and his young wife taking tea in the grand ballroom of the palazzo. The painting, which later acquired the title 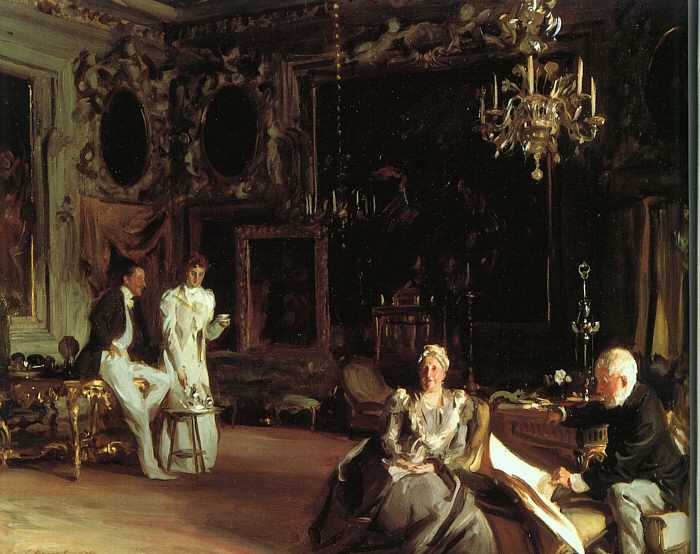 'An Interior in Venice',

was to become one of the artist's most famous and oft-reproduced images.

When Sargent presented the picture to Ariana Curtis, she refused it, finding the likeness of herself unflattering and the raffish pose of her son Ralph, hand-on-hip, casually draping himself on a gilded table, "indecorous." Her vanity and prudery were to become the family's loss and the Royal Academy's gain. The artist subsequently gave it to that institution as his diploma picture on being received as a full member, and the Academy has been its owner ever since.

Four years later, in another rare Venetian oil, Sargent infiltrated his upper-class friend Jane de Glehn, in the garb of a proletarian local woman, into his a sympathetic rendering of the relaxed informality of a typical lower-class hostelry, almost a low-life pendant to the high-life drawing-room scene of "An Interior in Venice." In 1904 Sargent was to do a bravura watercolor of Jane de Glehn, stylishly dressed, elegantly posed and very much the lady, at ease in a gondola gliding along the Grand Canal...

Roger Fry, the critic and member of the Bloomsbury group in London, accused the artist of reacting to Venice "for all the world like an ordinary tourist" - a verdict few who see the pictures today will share. Certainly contemporary buyers and collectors did not concur. In the two-day-long auction at Christie's of the contents of the artist's studio after his death, the Venice pictures were the subject of frenzied bidding. One watercolor alone reached the then-staggering sum of £4,830.


More spectacular, not to be missed, images
Related book:

Flip to back Flip to front
Listen Playing... Paused   You're listening to a sample of the Audible audio edition.


This gorgeously illustrated book presents nearly seventy of Sargent’s oil and watercolor paintings of Venice, many of them famous but others only rarely seen. The book also contains fascinating new photographs of actual sites depicted in Sargent’s paintings.

Sargent’s early works in Venice were created in 1880-1882, and he undertook a second, larger body of work in the city during visits from 1900 to 1913. His responses to Venice—its local figures, its buildings and waterways, its extraordinary light—reflect his changing interests over time as well as his lifelong ability to extend his own reach as a creative artist. The book considers various aspects of Sargent’s work and milieu in a series of informative essays by international scholars. They discuss the evolution of Sargent’s style, the topography of his work in Venice, his connections with Henry James and other Americans in Venice, Italian artists in Venice in the nineteenth century, and American artists in Venice in the nineteenth century.

He made his first visit to Venice in 1870, returning more than ten times over the next 40 years and taking this city as the subject of his art more frequently than any other: in effect, his particular love of Venice would, from the 1890s to 1913, be reflected in the 150 or so oils and watercolours. Approximately sixty of these works were shown in the Museo Correr exhibition. The first Venetian show to be entirely dedicated to the artist, this exhibition took the form of a gondola ride down the Grand Canal. Sargent often painted from within a gondola, rendering the unusual views afforded by this low vantage point.

Palaces, churches, campi and canals are all enlivened by the play of light on water and architectural details. However, alongside views of famous monuments such as the Rialto Bridge, the Doge’s Palace and the Church of the Salute, there are also evocations of daily life in the Venice of the time: interiors of workshops, crowded streets, women at work, busy cafés and osterie, etc. And whether interiors or external scenes, each of these works reveals the dominant features of Sargent’s art: exploration of light effects, freedom and precision of line, perfect mastery of form.