Richard Diebenkorn: The Berkeley Years, 1953–1966, on view at the de Young Museum from June 22 through September 29, 2013, was the first exhibition to explore in-depth the work produced by Diebenkorn between 1953 and 1966, when he lived in Berkeley, California. The presentation included over 130 of the artist’s paintings and drawings assembled from collections across the country, many of them rarely or never before seen in public exhibitions. Diebenkorn’s engagement with the unique settings of the Bay Area, along with his personal history, tied this exhibition deeply to the region.

Diebenkorn underwent a remarkable metamorphosis during what is now known as his “Berkeley period,” beginning with an abstract phase influenced by the Bay Area's natural environment, and then moving to figurative works, including figures, interiors, and still lifes. Fiercely independent, Diebenkorn continued to explore his shifting conceptions of abstraction and figuration over these years, and rejected allegiances to schools or movements.

His challenge to prevailing orthodoxy also helped to elevate Diebenkorn’s national profile. As contemporaries like Willem De Kooning and Jackson Pollock wrestled publicly with Abstract Expressionism, Diebenkorn’s work offered another important perspective in the critical conversation of the time. His appearance in Life magazine, as well as an article titled, “Diebenkorn Paints a Picture” in ARTnews magazine, both published in 1957, further expanded the painter’s influence.

“It was during this period that Diebenkorn really became Diebenkorn,” says Timothy Anglin Burgard, the Ednah Root curator-in-charge of American art. “His artistic integrity rendered him immune to external pressure to conform to either abstract or figurative styles, and set a liberating example that seems remarkably prescient given the inclusive nature of the contemporary art world.”

Diebenkorn was profoundly influenced by the nature and culture of the Bay Area, and many of these works are saturated with light and atmosphere, as well as the deep reds, greens, and ochres of the region. Although born in Portland, Oregon, Diebenkorn grew up in San Francisco’s Ingleside Terraces neighborhood, attended Stanford University and UC Berkeley, and was both a student and an instructor at the California School of Fine Arts (today the San Francisco Art Institute.)

Diebenkorn’s very first solo museum exhibition was held at the Legion of Honor in 1948, and Richard Diebenkorn: The Berkeley Years, 1953-1966 continued the Fine Arts Museums’ long engagement with the artist’s work. Though Diebenkorn would also make significant contributions to the modernist tradition through his work in New Mexico and Southern California—work celebrated in other recent exhibitions—Richard Diebenkorn: The Berkeley Years, 1953-1966 was a story rooted in the Bay Area, an exploration of one of the most complex and interesting chapters in postwar American art.

The exhibition was organized by the Fine Arts Museums of San Francisco, in collaboration with the Palm Springs Art Museum.


From an outstanding review: Even when Diebenkorn was flinging paint or applying it with some degree of frenzy there is always a sense of schematic restraint in his compositions. Diebenkorn's works lack the elevated confidence of fanaticism and the finesse of charlatanism. His relatively even tempered "Berkeley" canvases are tempered by a sense of intellectual and emotional reticence that is lacking in De Kooning's oedipal tantrums and Still's brutal crags. To put it another way, Diebenkorn appears to have had some principled doubts about action painting, but he gave it a try and his work gained confidence and vitality from his engagement with it. One of the joys of the de Young show is to scan the surface of paintings like "Interior with Doorway" of 1962 and to see how the painting fell into place when the artist's final edits -- such as the dark fields of negative space around the folding chair -- cause the composition to lock into place. I couldn't stop looking at the gorgeous hints of colors pulsing through the chair's legs: they are traces of something beautiful that will never be fully revealed.


Some of the paintings in "The Berkeley Years" show the mixed results that occurred as Diebenkorn felt free to experiment with his subject matter. There is a very odd painting of a cluttered table with a Guston-like hand holding a cigarette reaching towards it. There is also a stunning picture of a studio utility sink that is a masterpiece of zen brushwork. Diebenkorn's confident and masterful rendering of the zig-zagging drainpipes under the sink has more abstract vitality than most Franz Kline paintings... After returning from a trip to Russia 1964 where he viewed the incomparable Matisse paintings on view at the Pushkin Museum and at the Hermitage Diebenkorn indulged in a final artistic apprenticeship, painting homages to Matisse including "Recollections of a Visit to Leningrad." Diebenkorn learned a great deal from this final deep exploration and was especially sensitive to the stylizations and abstract tendencies in Matisse's works. By 1966 Diebenkorn -- who knew when not to linger -- had absorbed what he needed to and was ready to move on...

To the left of the doorway was a lovely but fussy painting of the artist's wife: "Seated Figure with a Hat." To the right of the door was a brave but awkward figure of a standing female nude: "Nude on Blue Ground." The two paintings seemed to say the same thing: Diebenkorn had taken the figure towards two dead ends.

From another good review: (some images added)

For example, Berkeley #22 (1954), one of the earlier works on view, instantly invokes the impression of a rising hillside whose tall horizon is topped by a darkening sky. It takes several moments to settle into the painting’s actual vernacular: an abstract composition of thick brushstrokes roughly applied in crosshatched patterns and bright colors muddied by contrasting hues emanating from above and beneath. The painting is an accumulation of gestures that seem to put line at odds with shape, the artist allowing neither to assert itself fully. But it is abstract only in peering closely at each mark or block of color; the moment one takes in the canvas as a whole, a landscape immediately snaps back into view...

Even at their most representational, the paintings here don’t cohere into declarative statements on landscape or figure. So, in looking at Seawall (1957) or Cityscape, Landscape 1 (1963), the impression that one is gazing at a view of the cliffs at Point Reyes or Potrero Hill gives way to the cognizance of how the stacked planes of color in each painting refuse to coalesce into neat representations of physical terrain.


And from still another interesting review: 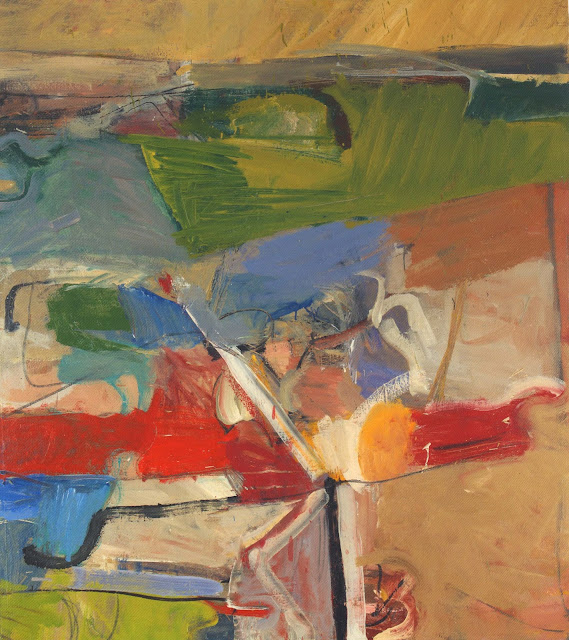 The earliest works in the exhibition are indeed abstract, graffiti like ink drawings, influenced by the abstract expressionists, specifically de Kooning. As time passes Diebenkorn’s work, much praised by the art community for its energetic, abstract qualities, becomes more figurative. 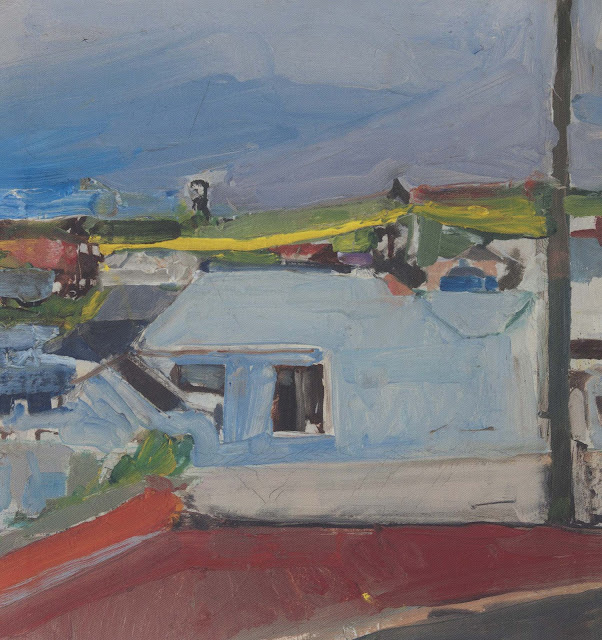 In 1955 he created “Chabot Valley” his first representational landscape. His shift to figurative work shocked the art world. In 1957 Diebenkorn wrote, “Temperamentally perhaps I had always been a landscape painter.” He further commented, “Abstract literally means to draw from or separate. In this sense every artist is abstract… a realistic or non-objective approach makes no difference. The result is what counts.” 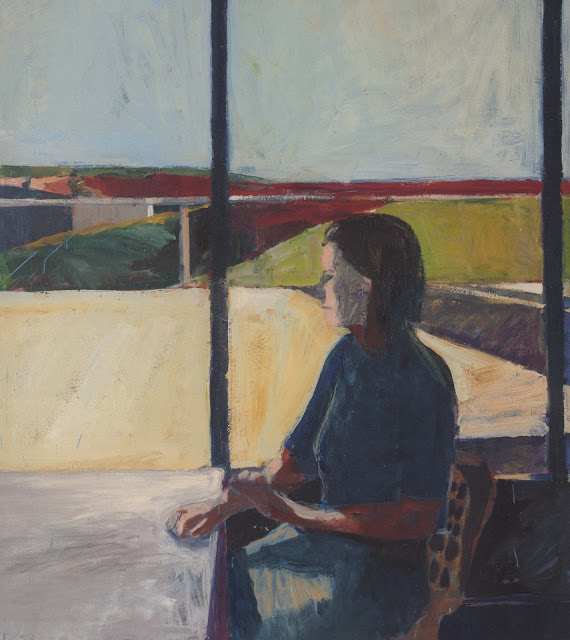 Throughout these years Diebenkorn returns to drawing from the figure. His 1958 piece “Woman in Profile” uses energetic layers of impasto to describe a woman. Diebenkorn paints the organic shapes of the figure and juxtaposes them to the landscape outside; the grid pattern of the windows unites the two worlds.

Another good review with quite a few more images

Posted by Jonathan Kantrowitz at 9:27 AM