Delacroix and the Matter of Finish

Delacroix and the Matter of Finish, organized by Eik Kahng, assistant director and chief curator at the Santa Barbara Museum of Art, features the dramatic work of the leader of the French Romantic Movement, who is often heralded as the “father of impressionism.” 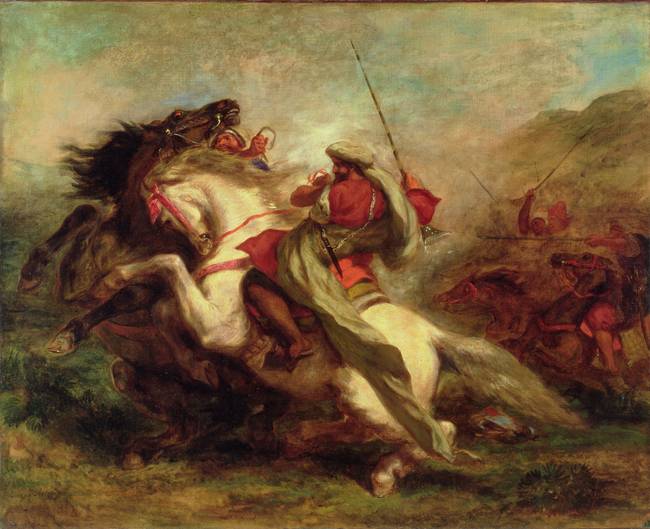 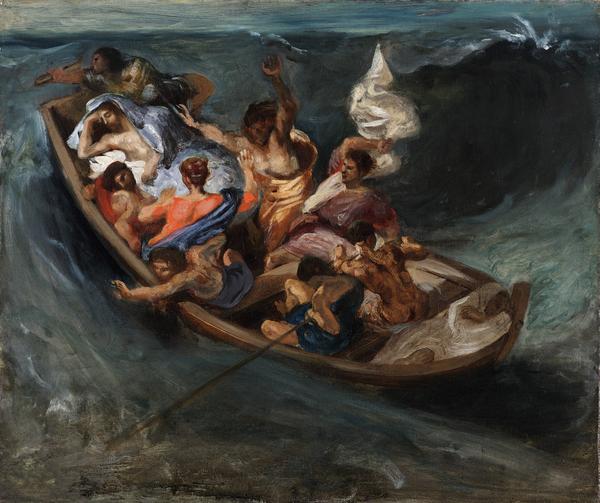 Delacroix, Christ on the sea of Galilee 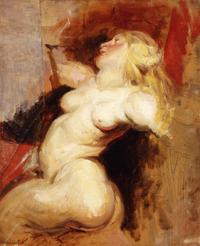 Comprised of 25 paintings and 20 works on paper, the exhibition will highlight Delacroix’s unparalleled coloristic surface effects, his famously vigorous brushwork, his troubled collaboration with his studio assistants, his journey to North Africa, and the brilliant palette of his late works.

This important and beautiful international loan exhibition marks the first presentation on the celebrated French artist Eugène Delacroix (1798–1863) in the United States in over a decade, and the first major monographic show devoted to the Romantic artist on the West coast.

Delacroix is typically associated with Romanticism and thought of as its primary exponent _ i.e. the leader of an art movement that dominated French painting in the first half of the 19th century, characterized by the representation of extreme states of emotion through an expressive use of bold color in dynamic compositions. The artist’s most beloved images include the so-called “Orientalist” pictures, featuring exotic subjects such as The Fanatics of Tangier (above), featured in the exhibition, as well as his more overtly political allegories, the most famous of which is

Yet the artist was also drawn to dramatic moments in Greek and Roman history, and demonstrated a life-long fascination with the Stoic Roman philosopher-emperor, Marcus Aurelius.

Featuring 27 paintings and 18 works on paper, the exhibition also showcases a previously unknown and unpublished version of Delacroix’s dramatic masterpiece, The Last Words of Marcus Aurelius, which recently surfaced in a Santa Barbara private collection. After several years of scholarly and technical study, the painting has now been authenticated by Santa Barbara Museum of Art (SBMA) Assistant Director and Chief Curator, Eik Kahng: 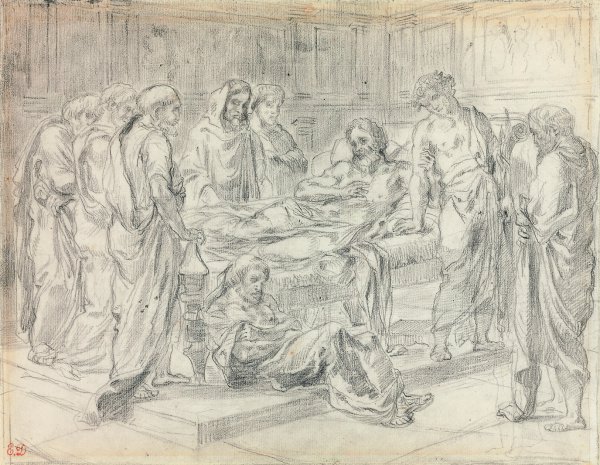 Eugène Delacroix, preparatory drawing for The Last Words of Marcus Aurelius, circa 1844, black chalk on paper

Delacroix’s allegiance to classical subjects was the consequence of his deep admiration for the greatest art of the past, which the ambitious artist strove to surpass, especially in his public, large-scale decorations. At the same time, his restless search for the technical means to convey the vividness of the hallucinatory scenes of human drama played out in his mind’s inner eye_whether plucked from the pages of history, Homer, or the poetry of Lord Byron_make him one of the most innovative artists of the 19th century.

In the accompanying exhibition catalogue, curator Eik Kahng offers an extensive iconographic study of the sources for the subject of The Last Words of Marcus Aurelius, thereby reassessing the artist’s relationship to Romanticism’s supposed antithesis, Neoclassicism, and to artists such as Jean-Baptiste Greuze (1725–1805) and Jacques-Louis David (1748–1825), painters with whom Delacroix is not often compared.

Problems of attribution have long plagued Delacroix studies, particularly given the artist’s reliance on students as collaborators to support the most ambitious of public commissions, which included vast decorative cycles for the ceiling and walls of the Palais Bourbon and the Luxembourg Palace in Paris. Delacroix and the Matter of Finish is the first exhibition to invite side-by-side comparison between Delacroix’s paintings and the so-called “sketch-copies” by his closest students, Pierre Andrieu (1849–1935) and Louis de Planet (1814–1876), revealing a gulf in technical skill . The exhibition also offers a snapshot of the evolution of Delacroix’s painterly touch over the course of his rich career, from the relatively tight brushwork of to the explosive and almost abstract colorism of the last decades, as instanced by Winter (below). The artist’s willingness to allow for the “completion” of his “rough” painterly idea in the imagination of the viewer is a hallmark of the Romantic aesthetic and yet another play on the various connotations of the word “finish” in the exhibition’s title.

The 27 lenders for this exhibition include museums and private collectors throughout America, as well as distinguished institutions in Canada and Europe, including the Art Gallery of Ontario; the Honolulu Museum of Art; the Kunsthaus Zürich; the Kunstmuseum Basel; the Musée des Arts décoratifs, Paris; the Musée des Beaux-Arts, Lyon; the Musée du Vieux-Toulouse; the Musée national Eugène Delacroix, Paris; the Musée Fabre, Montpellier; and the Museo Thyssen-Bornemisza, Madrid. 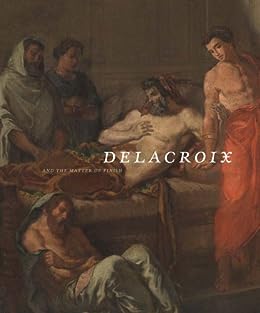 The accompanying, groundbreaking publication centers on a previously unknown variation of Eugène Delacroix’s (1798–1863) dramatic masterpiece The Last Words of the Emperor Marcus Aurelius, published here for the first time. This book offers a compelling reassessment of the relationship of the artist, widely considered a primary exemplar of Romanticism, to Neoclassical themes, as demonstrated by his life-long fascination with the death of Marcus Aurelius. Through this investigation, the authors reinterpret Delacroix’s lineage to such fellow artists as Jacques-Louis David (1748–1825). Playing on the various interpretations of the word “finish,” the book also offers a fascinating account of Delacroix’s famously troubled collaboration with his studio assistants, his conflicted feelings about pedagogy, and his preoccupation with the fate of civilizations. The catalogue features essays by Dr. Kahng; Marc Gotlieb, Director of the Graduate Program and Class of 1955 Memorial Professor of Art, Williams College; and Michèle Hannoosh, Professor of French, University of Michigan.

Posted by Jonathan Kantrowitz at 6:21 AM