Looking East: Western Artists and the Allure of Japan


Looking East: Western Artists and the Allure of Japan, on view in the Frist Center for the Visual Arts’ Ingram Gallery from January 31 through May 11, 2014, celebrates the cultural and aesthetic influences of Japanese art and culture on the Western imagination in the late nineteenth and early twentieth centuries. Premiering at the Frist Center, this traveling exhibition reveals aspects of the fruitful exchange by presenting works and objects by influential Japanese artists alongside those of Western luminaries such as Mary Cassatt, Edgar Degas, John La Farge,

Visitors to the Frist Center already fond of Impressionist and Post-Impressionist masterpieces such as Postman Joseph Roulin (1888) by Van Gogh and Under the Horse-Chestnut Tree (1895) by Cassatt may be surprised by their direct connections to Japan highlighted in this exhibition. “There have only been a few exhibitions on this subject and it is exciting for the Frist Center to be the first venue for this one,” says Frist Center Curator Trinita Kennedy. “Because of the presence of Japanese companies, Nashville is the perfect place to celebrate this important moment of artistic exchange between East and West.”

The exhibition, which will coincide with the city’s Cherry Blossom Festival, will later be seen throughout Japan and then at the Musée National des Beaux-Arts du Québec and San Francisco’s Asian Art Museum.

Drawn from and organized by the Museum of Fine Arts, Boston—world renowned for their Japanese, American, and European collections of this period—Looking East consists of more than 170 objects, including arms and armor, decorative arts, paintings, prints and drawings, and textiles.

When Japan opened its ports to international trade in the 1850s and emerged from centuries of self-imposed isolation, a craze for all things Japanese set in among European and North American collectors, artists and designers. The phenomenon, dubbed japonisme by the Parisian critic Philippe Burty in 1872, created a radical shift in Western tastes toward Japanese aesthetic principles, and is evident in major movements including Impressionism, Post-Impressionism and Art Nouveau. 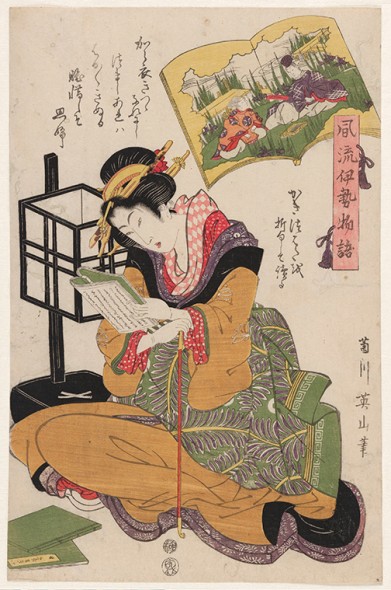 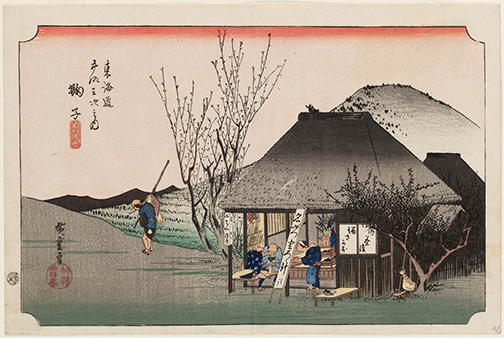 Many Western artists first learned about Japanese aesthetics through color woodblock prints known as ukiyo-e, or “pictures of the floating world” that typically depicted scenes from Kabuki theater, red-light districts and other fashionable and fleeting pleasures. “Artists were eager to demonstrate their curiosity about the wider world and Japan was particularly appealing,” says Ms. Kennedy. “Everything about Japan—from the way people dressed and ate and how artists looked at the world—would have been novel to Western artists.”

Looking East is organized into five segments, starting with an introductory section, followed by the themes of city life, women, nature and landscape. For each thematic subject, Japanese objects are paired with American or European works to represent a particular stylistic or technical influence. For example, regarding landscapes, “Instead of using shadows to create convincing three-dimensional forms, the Japanese employed contrasts in color, the repetition of shapes, and a focus on essential features to animate views of such iconic sites as Mount Fuji,” says Ms. Kennedy. “A number of these pictorial devices became part of the Western repertoire.”

Signaling their own cosmopolitanism, Western artists staged their compositions with elegant oriental props; Japanese fans, kimonos, lanterns, screens, umbrellas, and vases, for example, are especially common in French paintings. “The French Impressionist Claude Monet looked to his collection of more than 200 Japanese prints as a source of inspiration, and even based the gardens at his country home in Giverny, France on ukiyo-e landscapes,” explains Ms. Kennedy. Characteristic Japanese flora and fauna motifs such as chrysanthemums and butterflies are also incorporated in Western decorative arts as seen in this exhibition’s elaborately decorated inkstand (1876) by the French designer Paul Legrand:

The japonisme influence even extended to architecture, furniture design and book illustrations, examples of which are also on view in this exhibition.

From an outstanding review (some images added):

Van Gogh borrowed freely from ukiyo-e portraits of Kabuki actors to create paintings such as Postman Joseph Roulin from 1888. In this well-known work, Van Gogh depicts the subject’s face as a vibrant mask that seems to hover over his body, while his body language and hand gestures are directly reminiscent of those used in Kabuki drama. 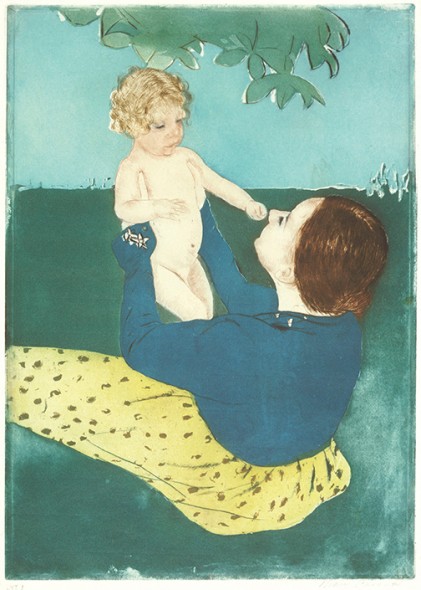 American painter Mary Cassatt was inspired by the intimate depictions of women and children found in ukiyo-e to create many of her signature works such as Maternal Caress from 1902, which shows a young child embracing her mother. It is an intimate snapshot of home life not often found in prior Western painting.

Henri de Toulouse-Lautrec took cues from ukiyo-e prints as well, depicting city life and leisure activities—subjects that would have traditionally been deemed frivolous by the academy. In The Jockey from 1899, the viewer is in the midst of the action at the racetrack as two horses hurtle furiously toward the finish line—an image that has much in common stylistically and thematically with 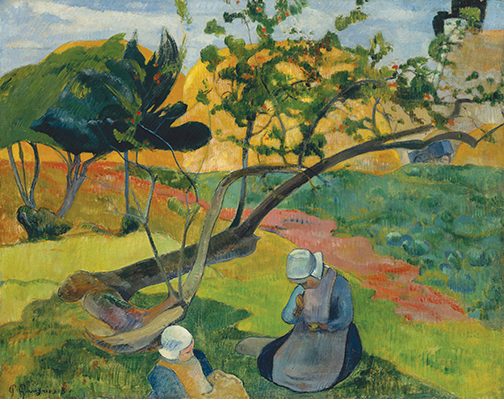 The rage for Japanese arts extended to architecture, furniture, and graphic design as well. In one particularly stunning print in the exhibition, Kinryuzan Temple, Asakusa from Hiroshige’s One Hundred Famous Views of Edo, a winter view of a snow-covered temple compound is framed by a red door post on the left and a brilliant red lantern in the upper right. The brilliance and modernity of the print are derived from the spare color palette and the dynamic, off-center composition. A Western corollary to this work is found in

where vertical elements frame an audience in silhouette as yellow lanterns tumble across the picture plane and fireworks light up the sky. Looking East: Western Artists and the Allure of Japan was organized by the Museum of Fine Arts, Boston.

The exhibition is accompanied by a catalogue produced by MFA Publications at the Museum of Fine Arts, Boston.
Posted by Jonathan Kantrowitz at 9:33 AM