After living and teaching in St. Louis from 1947 on, Beckmann finally moved to New York where he also accepted a teaching position and where he died walking through the city in 1950. From the point of view of the artist’s evolution, these years on American soil were decisive: marking a new beginning for and a further development in his work, they will be the subject of a monographic exhibition for the first time.

For Frankfurt am Main, where Beckmann lived, worked, and taught at the Städel School from 1915 to 1933, this project is of special importance: the Städel Museum boasts a rich collection of paintings, drawings, printed graphic works, and sculptures by the artist and has presented a series of exhibitions on specific aspects and periods of his oeuvre. A comprehensive exhibition dedicated to Beckmann was shown as early as 1947. Subsequent shows included, among others, exhibitions focusing on his triptychs (1981), his early paintings (1983), his Frankfurt years (1984), a retrospective (1990/91), as well as presentations of his printed graphic work (2001 and 2006).

The exhibition highlighting the artist’s American years thus concluded the sequence of shows exploring the individual stages of Beckmann’s career.

Max Beckmann lived and taught in the United States from the late summer of 1947 on. It was only after his ten-year exile in Amsterdam that the artist was able to realize his long-cherished plan to emigrate to the United States in 1947. He spent the last and extremely productive years of his life far from Europe. The new continent held numerous encounters with other people, journeys, and impressions in store for the painter. St. Louis, Missouri became his first home in America; he stayed for two years and held a guest professorship at the city’s Washington University.

In the fall of 1949, he moved to New York, where he taught at the Brooklyn Museum Art School. Frequent shorter and longer journeys took him to the Midwest, to Chicago, to New Orleans, to Boulder, Colorado, but also to California and the West Coast, for example. The spatial expanses of the foreign continent – its coasts and the atmosphere of its “wild” landscapes, as well as the cosmos of its metropolises – were a new physical experience for Beckmann which became a perceivable source of inspiration for his art. In the midst of his new life, Max Beckmann suffered a heart attack and died on a street corner near New York City’s Central Park.

From a review (some images added):

Beckmann died suddenly in New York in 1950. About half of the 85 paintings he made during his productive last three years are in this exhibition. Like many of his earlier pieces, they often concentrate on brightly coloured, elongated and sometimes cartoonish human figures, frequently drawn from mythology, history or religion.

One of the stars of the show is Beckmann's last triptych, “The Argonauts” (1949-50, pictured), a play on a Greek myth that had intrigued him since he was an exile in Amsterdam.

But there are also earlier works on show, many of which anticipate his arrival in America, the land of his dreams, while also reflecting his traumatic time in Germany and his loneliness in Amsterdam.

“The Liberated One”, a self-portrait painted in Amsterdam in 1937, shows a distressed Beckmann, with the word “Amerika” just decipherable in the bottom left-hand corner. What a contrast to the 1947

in which the painter's fine clothing and the cigarette in his left hand exude self-confidence, despite his rather grim expression. 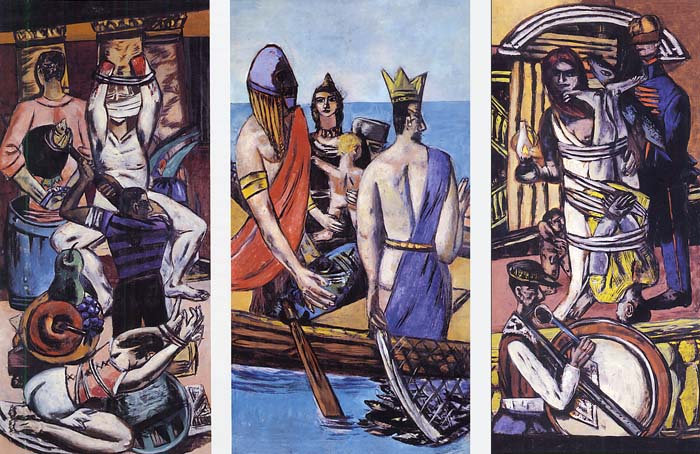 The same expression can be seen in a photograph, taken in 1947, of Beckmann in front of his triptych “Departure” (1932-1935). It was the earliest of nine triptychs he painted during his career, and was acquired by New York's Museum of Modern Art in 1942. As soon as he got to New York five years later he visited the painting. In his diary on September 11th 1947 he wrote, “Tomorrow I am supposed to get photographed. Nonetheless I have a rather dark look into the future.” Having lived through the horrors of Hitler's Germany—the left and right panels of the triptych show figures being tortured—and the traumas of exile, his face in the photograph is tight-mouthed, like an Easter-island sculpture, facing the world and waiting for the challenges to come.

was the first of Beckmann’s paintings to enter the collection of the Städtische Galerie at the Städel, having been purchased by former Städel director Georg Swarzenski directly from the artist’s studio in 1919. It was confiscated by the Nazis in 1937 and presented in the exhibition “Degenerate Art.” Today, it is part of the collections of the Museum of Modern Art in New York. 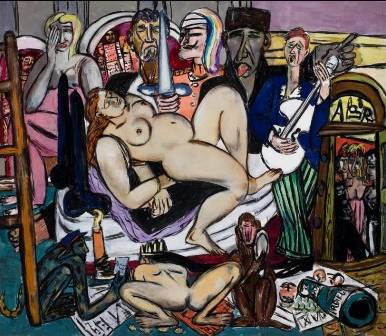 A substantial catalogue with approximately 280 pages and 220 color and 55 black-and white illustrations will be published by Hatje Cantz to accompany the exhibition. Edited by Jutta Schütt, the catalogue will comprise an introduction by Max Hollein and texts by David Anfam, Karoline Feulner, Ursula Harter, Lynette Roth, Stefana Sabin, Jutta Schütt, and Christiane Zeiller. German and English editions.

Posted by Jonathan Kantrowitz at 11:00 AM