The Baltimore Museum of Art (BMA) presents a compelling overview of one of the most visually arresting art movements of the 20th century. German Expressionism: A Revolutionary Spirit, on view January 29 -September 14, 2014, features more than 35 vivid paintings, prints, watercolors, drawings, and sculpture by Wassily Kandinsky, Ernst Ludwig Kirchner, Franz Marc, and others who contributed to this creative zeitgeist (spirit of the time). The exhibition includes rarely seen works from the BMA and select loans from private collections. It is curated by BMA Associate Curator of European Painting & Sculpture Oliver Shell.

German Expressionism emerged as a result of the country’s extraordinary industrial growth and modernization in the late 19th century. Two groups with similar ambitions formed to liberate themselves from the older generation, revolutionize art, and bring about a universal spiritual rebirth. Die Brücke (The Bridge) began in 1905 by Ernst Ludwig Kirchner and several architecture students in Dresden. Der Blaue Reiter (The Blue Rider) was organized in 1911 by Wassily Kandinsky and Franz Marc in Munich. Inspired by exhibitions of works by Vincent Van Gogh, Henri Matisse, and others, both groups explored increasingly subjective forms of representation. They also shared a vital sense of celebration and an eagerness for invention, especially in the graphic arts. They were soon joined by Paul Klee, Emil Nolde, Max Pechstein, and other like-minded spirits who believed that art could herald a renewal of society.

The exhibition explores two major themes embraced by this new generation of artists. Some showed a fascination with modern cities and mass entertainment, creating works such as

while others demonstrated a concern with nature and folk traditions or were inspired by the kind of authenticity they found in non-European “primitive” art.

Many of these artists experimented with woodcut printing techniques that had flourished in the 16th century, creating intensely colored prints like 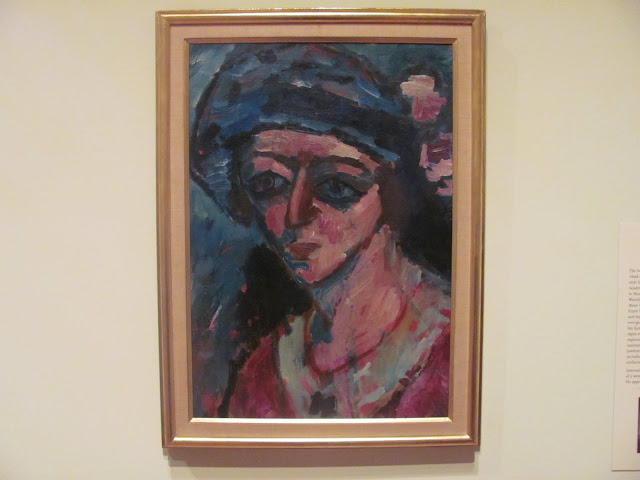 and important precursors to Expressionism such as

The last section of the exhibition includes intense psychological portraits by Dix, Max Beckmann, and others whose artwork reflects the change in mood caused by the devastation of World War I and Germany’s economic and political collapse. By 1933, the era of Expressionism was largely over.

From an outstanding review: (Images added)


This is especially apparent beside Ernst Kirchner’s “Fir Trees,” from 1919, (above) which takes the bucolic mysticism out of Klimt and replaces it with the long, arching shadows and ominous uncanniness that foreshadows The Cabinet of Dr. Caligari, which was released the following year.

Kirchner is, perhaps, the dominant figure in the show, with seven works, each of which takes a different tone and style. He has a quick drawing of women at a café, a lithograph of dancing girls, a woodcut of a woman putting on her shoe. Then there is the wildly modern woodcut “Three Bathers by a Lake” with its Christ-like central figure, or the stunning, Fauve-influenced pink oil-painted sky of “Flower Beds in the Dresden Gardens”: 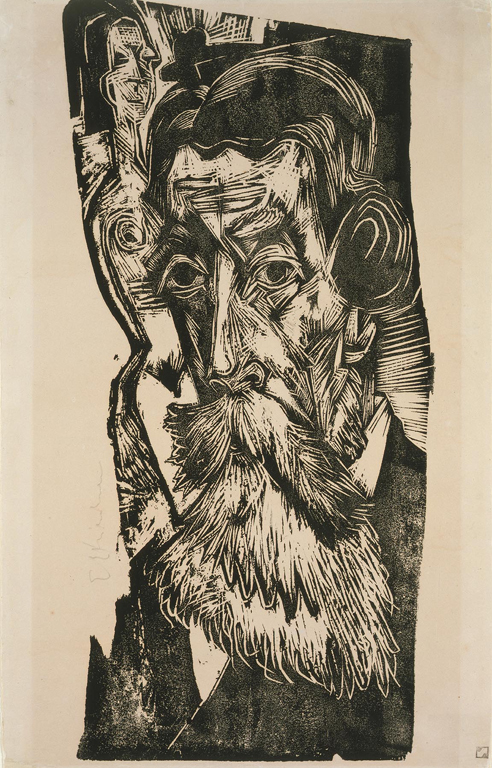 And the “Head of Ludwig Schames” is simultaneously deeply classical and highly modern. Kirchner is a fascinating figure, one of the founders of the Die Brücke movement, a nudist, proponent of free love, and general all-around Bohemian who has a lot to say to our own time. If this show were to do nothing more than reintroduce him to Baltimore, it would be a great success...

If the show is divided into pre-war and postwar sections,

stands at the fulcrum between them. The cold, sadistic look on the World War I cavalry officer is as imperious as his kinky black uniform, painted with angry strokes (the background is a mash of abstract colors that conveys an ominous emotional intensity). His expression is that of the leaders of Europe who felt this war would be like the ones which came before it—when instead, these haughty cavalrymen and their horses were sawed in half by machine guns...

Beckmann’s “In the Street Car” places the viewer in a streetcar across from three people: In the center a man, most likely a war veteran, glowers at you from above the bandage that covers a missing nose; to his left a woman looks down in tired sorrow; and to his right a William Burroughs-looking fellow sucks his thumb. The people are physically close but infinitely distant, alienated. The work shares the fascination with the urban life of Kirchner’s dancing women or Max Pechstein’s “The Circus” (above) while primarily reflecting the loss that comes with modern life rather than the gains.

Otto Dix’s 1914 “The Cannoneer” captures the madness, fury, and fear that came with Dix’s enlistment in that same year...

Käthe Kollwitz’s “Battlefield” comes from 1907, but it is the darkest work, both literally and metaphorically, in this dark show.

Posted by Jonathan Kantrowitz at 11:07 AM