Of Max Beckmann’s nine triptychs, Blind Man’s Buff is the largest and arguably the most important. The work was painted during Beckmann’s exile in Amsterdam between September 1944 and October 1945, under difficult wartime circumstances. In his journal, Beckmann refers to air raids and lack of food, coal, and electricity; in fact, much of the triptych was painted by candlelight

Max Beckmann (1884-1950) is widely regarded as one of the most important artists of the twentieth century. In his use of colour, spatial composition and levels of symbolism Beckmann exerted a major influence on modern art in Germany and beyond. Beckmann himself drew inspiration from the work of the Flemish Primitives and Vincent van Gogh, among others. Above all, it was his daring use of colour that ranked Beckmann alongside Matisse and Picasso as one of the most sensational artists of the first half of the twentieth century. Beckmann succeeded in expressing the mysteries of life like no other painter. He created his own entire lexicon of images, with which he communicated his dreams and fears by means of a highly personal symbolism. The question of the meaning of existence is a dominant presence in his work. Beckmann came to the conclusion that man is not free, but is shackled by earthly chains. He looked on life as a play or a masquerade, in which each person plays their own role.

In 1937 Max Beckmann fled the Nazi terror in Germany to settle in Amsterdam in the Netherlands, where he was to live for the next ten years. The immediate cause for his flight was the speech Hitler held at the opening of the Haus der deutschen Kunst (House of German art), just one day before the opening of the Degenerate Art show on 19 July 1937. This speech, in which Hitler clearly threatened modern artists, was broadcast on the radio. Beckmann heard it and immediately packed his bags. Beckmann painted over a third of his entire oeuvre while in the Netherlands. This period may thus justifiably be identified as his most productive. It was here that he produced five of his nine monumental triptychs. These spectacular works of art, comprising a central panel with flanking wings, rank among the icons of modern art. In 1947 Beckmann was given a visa for the United States, where he died after just three years.

The exhibition showed masterpieces from this Amsterdam period, including the three impressive triptychs His paintings bear witness to his interest in the world of the cabaret, Dutch landscape and life in Amsterdam. Through his diary, letters, photographs and an impression of his studio, the visitor to the exhibition is given an insight to the life Beckmann lived in Amsterdam.

From an outstanding review: (some images added) Felix Nussbaum’s Self in Concentration Camp (1940),

a painting included in the exhibition Max Beckmann: Self-Portrait With Horn at the Neue Galerie, is as bleak as the title implies. Wearing a wool cap, a tattered jacket and a lean beard, the artist looks askance with steely distrust. In the background, a figure defecates into a large metal can. There’s barbed wire, a sky the color of steel wool and an air of Boschian portent.

Bosch’s hell couldn’t compare with Hitler’s. While studying in Rome, Nussbaum, a German Jew, heard Hitler’s minister of propaganda advocate for the Nazi ideal of art; Nussbaum realized soon enough that neither he nor his paintings fit the standard. Nussbaum spent the majority of the war in hiding, continuing to paint, and ultimately died in Auschwitz at the age of 39. Self in Concentration Camp has the awful clarity of a foregone conclusion

Nussbaum’s painting is diverting enough to make one curious as to what else he did. It’s included in the Neue Galerie exhibition to provide a sense of social and artistic context. There are paintings, drawings and prints—all portraits—by other Beckmann contemporaries as well, but none can equal the brooding power of Self-Portrait with Horn, not even the magisterially detached Self-Portrait in Front of Red Curtain (1923) by the man himself. 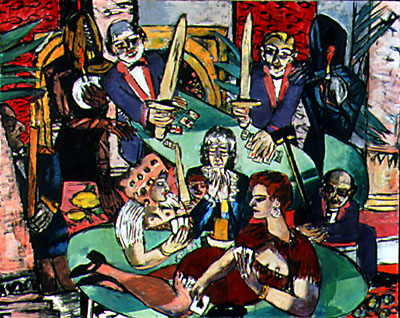 Max Beckmann (Leipzig 1884 – 1950 New York) is one of the titans of modernism, even though he saw himself as the last Old Master. He never joined any of the avant-gardist schools of the twentieth century, but the experiences of Impressionism, Expressionism, New Objectivity, and abstract art left their traces in his oeuvre. Beckmann was long perceived as a typically German artist, and only in the past few years has his importance been fully appreciated on the international stage, with retrospectives in Paris, London, and New York. Against the modernist tendency to dissolve the traditional genres, Beckmann remained a lifelong defender of classical genres: the depiction of the human figure—in the form of portraits, mythological tableaus, and acts—the still life, and the landscape. Famous as a painter of the human condition, he also renewed the genre of landscape painting with outstanding and haunting works that are virtually without equal in twentieth-century art.

The comprehensive special exhibition at the Kunstmuseum Basel now turns the focus on the artist’s oeuvre in landscapes, showing seventy paintings, among them masterworks such as The Harbor of Genoa from the St. Louis Art Museum

and the Seashore ("Meeresstrand") from the Museum Ludwig, Cologne,

but also sublime works from numerous private collections that have rarely been on public display.


Highlights of the exhibition include "Meeresstrand" from the Museum Ludwig, Cologne, painted in 1935. "The Harbor of Genoa" (1927), on loan from the St. Louis Art Museum, is a quite dark and melancholic work, especially when compared with the later "Promenade des Anglais in Nizza" (1947).

Beckmann’s landscapes allow the beholder to trace the development of his art in its purest form. Less shaped by allegorical layers of meaning, they directly reveal his magnificent qualities as a painter. Beckmann’s reserved view of the landscape remains striking: vistas framed by windows, curtains, parapets, columns, and elevated vantage points often mediate the distance between the inhabited world and the boundless expanses of nature. Private objects from Beckmann’s possessions frequently appear in the foregrounds of these landscapes as vestiges of the still life, giving the beholder a sense of the painter’s presence. The dramaturgy of these vistas is evidence that Beckmann fuses an abstractly conceived image of the landscape with the recollection of the impression he received from a particular scenery that is the foundation of each painting. The gaze he fixes on nature helps clarify his standpoint and places him in a relationship with the world. Landscapes from different phases of his life illustrate how this relationship evolves. Max Beckmann (Leipzig 1884 – New York 1950) is regarded as one of the great mavericks of modern art. His life’s work includes a large number of different portrait types: individual and double portraits, family and group depictions and also “hidden” portrayals in the allegorical works. In his portrait painting, Beckmann reflects a very personal fabric of relationships – with his family, his wives and to a wide circle of friends and acquaintances.

Max Beckmann. “Face to Face” presents on the one hand a classic portrait gallery, a “Who’s Who” of Beckmann’s life; on the other hand, it shows all the pictures in which the artist integrated portraits, whereby he cast his family and friends in roles within his allegorical world theatre.


From a review of another show:

Four paintings by the German artist Max Beckmann (1884-1950) are the centerpiece of the exhibition and suggest the qualities the collectors look for . A contemplative image of the artist's second wife Quappi, one of his friend the Alsatian engraver Sabine Hackenscmidt, and the two reproduced here. 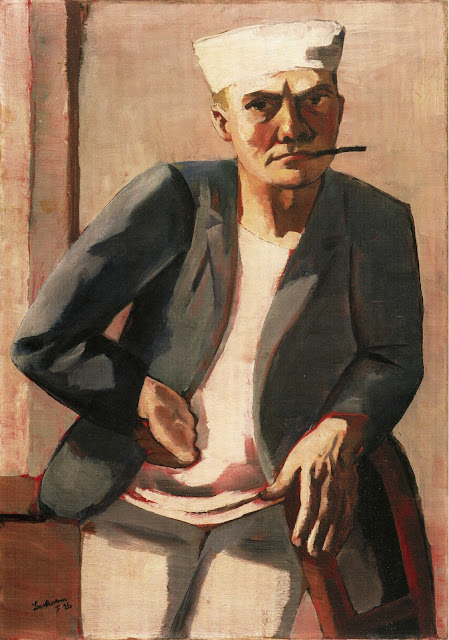 A fiercely thoughtful gaze aimed straight at the viewer belies the height of his successful career, and hints at the middle-aged Beckmann's attempt to understand the mystical aspects of life. 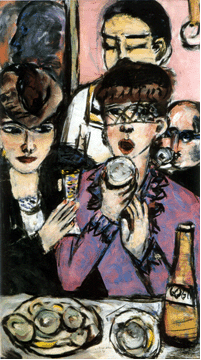 The Oyster-Eaters provides a challenge of another sort. Quappi Beckmann lifts the oyster to her lips as Sabine Hackenschmidt looks on, eyebrow arched enigmatically. A white-jacketed waiter stands behind. What is last-noticed is an ominous gray face looming in the background that seems to represent all that came after the pinnacle of 1926 for these people.

Posted by Jonathan Kantrowitz at 10:20 AM