Fernand Léger and Henri Laurens:Tête-à-Tête at the Museum Frieder Burda
Extraordinary works from the Centre Pompidou in Paris directly to Baden-Baden


Under the title “Léger – Laurens. Tête-à-Tête“, a total of about 80 works by these two renowned artists were presented from 23 June to 4 November, 2012. The works by Fernand Léger (1881 - 1955) and Henri Laurens (1885 - 1954) are defining for modernism. The artists were dedicated to two different fields: Léger brought out the main points in paintings, and Laurens created sculptures that still serve as role models nowadays. The works by the two contemporaries Léger and Laurens are contrasted for the first time at the Museum Frieder Burda. Similar themes, common interests as well as the friendship between the two artists are worked out in the presentation. This exceptional exhibition provides an opportunity for discovering two iconic figures of classical modernism from a completely new angle.

More than 20 significant works came from the Centre Pompidou in Paris for the Tête-à-Tête between Léger and Laurens in Baden-Baden. Some of them will be exhibited in Germany for the first time. Among them the monumental work by Fernand Léger ”Composition aux deux perroquets – Composition with two Parrots“ (1935–39), created in a completely new style. The impressive, four meters by nearly five meters painting is one of the most significant works of modernism.

The selection was completed by additional works from large European museums and private collections, among them the Art Museum Basel, the Museum of Modern Art Trust Ludwig Wien and the Art Collection Nordrhein-Westfalen in Düsseldorf.

Fernand Léger, born in 1881 in Argentan in the Normandy region, is one of the extraordinary modernist artists of the early 20th century. After having worked as an architectural draftsman for several years, Léger went to Paris around 1900 and took numerous classes at the École des Art Décoratifs. Like his friends Pablo Picasso and Georges Braque, in his works he deals with his times and during his cubistic phase he creates pictures with intense colors (blue, white, yellow, green) that he calls ”form contrastings“ . At the same time as Henri Laurens (whom he met in 1910), Marc Chagall, the author Guillaume Apollinaire and others, Léger had a studio in the well known Paris artist neighborhood ”La Ruche“.

Machines play an important roll in his world. Under the influence of war machines, his “période mécanique“ (mechanical period) begins in which the experimental movie ”Le ballet mécanique“ is created. Léger himself nearly dies during World War I. From then on, the human being is included in his subjects in a rather formulistic manner, it is presented as an anonymous object. After his “période mécanique“ Fernand Léger’s works are dominated by monumentality. The artist paints large format pictures like

“Composition aux deux perroquets – Composition with two Parrots“ (1935–39), a masterpiece from this period. During World War II Fernand Léger works in New York where he exerts great influence on American art. He now uses intense and clear colors that soon break free from forms they actually belong to. A new world comes into appearance. The artist designs a dynamic space in which the human being – as an acrobat, cyclist or scuba diver – now moves closer to the focus of the picture. 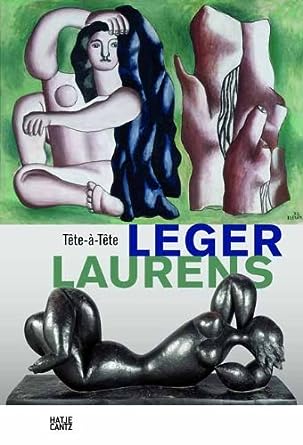 A comprehensive catalog (publisher Hatje Cantz) with color pictures of all exhibited works as well as numerous texts, biographies and explanations was published. Posted by Jonathan Kantrowitz at 10:55 AM