This exhibition focused on a unique genre of painting: cabinet pictures known as ‘kunstkamers’. This genre originated in Antwerp, and the paintings depict rooms filled to the brim with artworks, like tiny fanciful museums. Three works by Willem van Haecht (1593-1637), one of the genre’s most important founders, will form the core of the exhibition Room for Art. This is the first time all three known paintings by the master, from the Mauritshuis, the Rubens House and a private collection, were shown together. Alongside Van Haecht’s exceptional paintings, the exhibition also included masterpieces from other international museums and private collections. Together, the sixteen works in the exhibition offer an unrivalled survey of seventeenth-century Antwerp’s fascinating art world.

In the seventeenth century, the room in the house where a collector kept his most beautiful artworks was known as a ‘constcamer’. This term was also used to describe paintings of these rooms. ‘Constcamers’, or kunstkamer depictions, are paintings bursting with artworks, tiny museums for lovers of fine art. Expensive paintings line the walls and copies of famous antique sculptures cover the floor. There are albums of prints and drawings on display, together with antique coins, globes, porcelain and natural artefacts such as shells and flowers. The figures in these kunstkamers are art lovers, artists and distinguished guests. The subjects of the most important paintings-in-the-painting were chosen quite deliberately to contribute to the underlying meaning of the picture .

The paintings of Willem van Haecht (1593-1637) are undoubtedly among some of the most remarkable kunstkamer depictions of the seventeenth century. Van Haecht was born into an Antwerp family of artists and art dealers. His father was the landscape painter Tobias van Haecht (Verhaecht), the first teacher of Peter Paul Rubens (1577-1640). After a year-long trip to Paris and Italy, Van Haecht returned to Antwerp in 1626, where he took up residence with Cornelis van der Geest (1555-1638), a leading art collector and patron of Rubens. It was presumably in consultation with this art collector that Van Haecht painted a trio of kunstkamers that combine fantasy and reality. Nearly all the pictures he included in his kunstkamers were existing works by famous masters, though they may not always have been part of the same collection. As a result, his paintings beautifully illustrate the variety and richness of art collecting in seventeenth-century Antwerp, while the narrative elements point to artistic and cultural life in the city. Development of the Genre

The painted kunstkamer originated shortly after 1610 in Antwerp, and it remained a specialty of Antwerp throughout the seventeenth century.

One of the first artists to practise the genre was Frans Francken de Jonge (1581-1642). His output was extremely varied: together with small-scale history pieces, allegories and encyclopaedic still lifes, he regularly painted the figures in the interiors or landscapes of other masters. In 1612, Francken painted his first own interior, the earliest known kunstkamer. 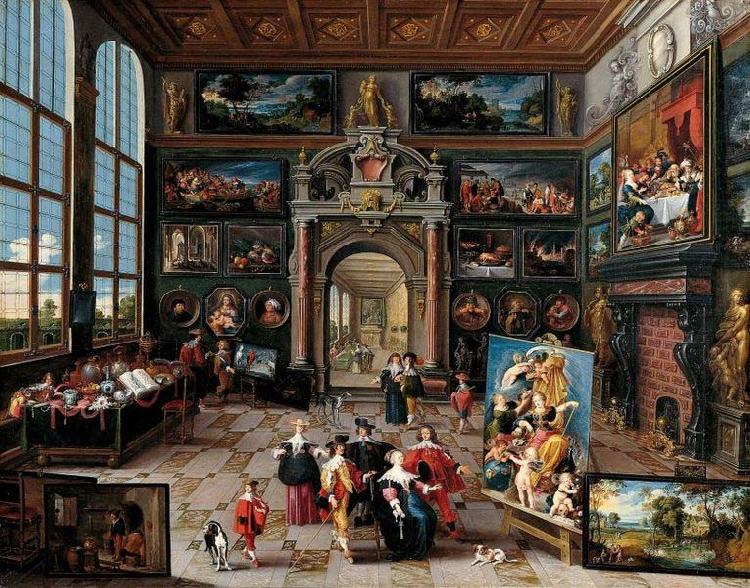 Rubens plays an important part in the kunstkamer depictions of Jan Brueghel the Elder (1568-1625). Alongside Brueghel’s painted copies of Rubens’s famous paintings, Rubens himself also contributed by painting the figures in Brueghel’s painted interiors. After the death of his father, Jan Brueghel the Younger (1601-1678), and later nephew Jan van Kessel (1626-1679), continued the family tradition.

David Teniers (1610-1690) was the first to export the genre from Antwerp, shortly after 1650. As court painter to Archduke Leopold Wilhelm, governor of the Spanish Netherlands, Teniers painted a series of monumental works depicting the archduke’s collection of paintings. He also published a catalogue of Leopold Wilhelm’s Italian paintings, entitled Theatrum Pictorium. This book is of particular importance to art history as it was the first illustrated catalogue of a collection of paintings.

A group of kunstkamer paintings dating from the late seventeenth century, which were sometimes worked on by more than twenty different Antwerp masters, represents the final flowering of the Antwerp kunstkamer. Under the direction of Gonzales Coques (1614/1618-1684), dean of the Guild of St Luke, each painter added his own original painting to the ensemble, thereby creating a sample sheet of nearly all the prominent artists working in Antwerp around 1670.