“If pictorial expression has changed, it is because modern life has required it...
The view from the window of a railway carriage and car travelling at speed has altered
the customary appearance of things. A modern man registers a hundred times more
sensorial impressions than an artist of the 18th century…
The compression of a modern painting, its variety, its decomposition of forms, are the
result of all this”.
Fernand Léger, 1914

These were the words used by Fernand Léger (1881–1955) on the eve of the outbreak
of the First World War to comment on the radical transformations the spread of the
second Industrial Revolution was bringing to every sphere of everyday life, in which an
increasingly frantic, or more modern, rhythm in life was changing art and its rules.

The Philadelphia Museum of Art and the Fondazione Musei Civici di Venezia are
dedicating a major exhibition to Léger and his extraordinary career within the
European artistic avant-garde, to be hosted in the rooms of the Museo Correr.
This important event, open from 8th February to 2nd June 2014, will be the first
major exhibition about the French artist’s work to be held in Italy, and will focus
on the theme of the depiction of the contemporary city.

Divided into five sections (The metropolis before the Great War, The painter of the city,
Advertising, The performing arts, Space), ‘Léger. A vision of the contemporary city
1910 - 1930’ is curated by Anna Vallye with the scientific direction of Gabriella
Belli and Timothy Rub, director of the PMA in Philadelphia and exhibition project
by Daniela Ferretti, in the wake of the success at the Philadelphia Museum of Art,
“Léger. A vision of the contemporary city 1910-1930” presents over 100 works,
of which more than 60 by Léger himself. The selection includes the outstanding
‘La Ville’, a painting that led the way to the most experimental and Cubist/Futurist
experimentation of his production, and which has exceptionally been loaned by the
Philadelphia together with a group of another 25 important works.

Painted by Léger in 1919 on his return to Paris after serving at the Front during the First
World War, this large picture would influence an entire generation of artists, becoming
a manifesto of painting dedicated to the subject of the contemporary city. The
painting’s subject is the city and its frantic activity, its architecture of Cubo-Futurist
assemblages, and its inhabitants: mechanical, almost robotic men, harmoniously
integrated into the dynamism of the new “urban machine”.

This extraordinary work, constituting the incipit of the exhibition, will be flanked by a series
of important works from public and private European and American collections
(Tate Liverpool, the Avery Art and Architecture Library of Columbia University in New
York, the Dansmuseet of Stockholm, the Centre Pompidou of Paris, the Musée National
Fernand Léger in Biot, the Toledo Museum of Art in Ohio and the Fondation Beyeler of
Basel, to mention a few), enabling the visitor not only to compare Léger’s picture with
many other innovative compositions by the same artist, all linked to the theme of the
modern city and some of them virtually unknown in Italy (such as his work for
theatre design and advertising, and sets for theatre and cinema), but also to explore
the links between his own work and that of other exponents of this fruitful avant-garde
season.

His rich production, which explored almost every field of artistic endeavour, from
advertising and cinema to graphic design and theatre, will be compared in the
exhibition with other masterpieces by leading artists of the period, friends and
travelling companions in experimentation, among whom Duchamp, Picabia, Robert
Delaunay, El Lissitzky, Mondrian, Le Corbusier; all artists who, like Léger himself,
have contributed to renewing the notion of how to depict the city, each using the form
best suited to his personal aesthetic interests but falling within one of the many ‘isms’ of
the early 20th century, from Cubism to Futurism, Constructivism to the Neoplasticism
of De Stijl.

The quantity and variety of the works and projects displayed – from the first urban
landscape of all, “Smoke over rooftops” of 1911, to the so-called mural pictures executed
between 1924 and 1926; from the costumes and choreographies for the “Ballets
Suédois” to such famous works as “The typographer” (1919), “Man with a cane” (1920)
and “Mechanical element” (1924), and Marcel L’Herbier’s film “L’inhumaine”, for which
he helped with the sets and which constitutes a celebration of cinema as synthesis of
the arts – will enable visitors to judge the artistic results of those crucial two
decades between 1910 and 1930 with their multifarious facets, when Paris was
truly the world’s capital for art, culture, trade and society, before the stock market
crashes caused its inexorable decline. And it was in Paris that Léger and the avant-garde
artists, responsive to the stimuli originating from that extraordinary “forge” of stimuli
and innovation that was the modern metropolis, played a leading role in redefining the
place of art within society.

Léger’s work in this field was truly pioneering – and the exhibition stresses the fact
– both for his multi-disciplinary conception of art and for his striving to change the
forms of painting, thereby meeting the demands of the new urban reality, in line with a
phenomenon that after the Second World War would be dubbed mass communication.
Reworking his style, which was first influenced by Picasso’s Cubism and his
contacts with leading exponents of the European avant-garde, like Robert Delaunay,
Jacques Lipchitz and Juan Gris, Fernand Léger gradually formed a wholly personal
manner, and from the period immediately after the Great War began to impose himself
as a major architect of painting. His “realism”, attuned to urban life, was certainly the
most interesting result of the cross-fertilisation between the various forms of art and
the style of the first mass media.

The exhibition is accompanied by a catalogue published by Skira-Milan, 2014.

Fernand Léger will be remembered in an exhibition, which takes place almost simultaneously with
the one of Correr Museum, held at the Musée National Fernand Léger in Biot, France.

“Fernand Léger: reconstruire the réel, 1924-1946” is an exhibition that, from 1st March to 2nd
June 2014, will shed light on part of artist’s career which is still little explored by investigating hisrelationship with the principles of a movement that, at first sight, was far from being his formation: Surrealism.

Fernand Léger lived through a period of great change that transformed everyday life. He witnessed the transformation from candles to gas and electricity, from horse-drawn carts to cars and the airplane, and from a prevalently rural society to an increasingly urban one. His generation also saw the birth of new means of communication, such as the cinema, telegraph and radio.

Born in 1881 at Argentan, Normandy, after an apprenticeship in architecture at Caen, he entered the École des Arts Décoratifs in Paris in 1903. After destroying most of his early works, in 1908 he began to develop a personal style, influenced by Cubism and Picasso’s work.

In 1914, he was called up and served during the First World War in the trenches of the Ardennes and Verdun; it was an experience that was to mark him for life. At the end of the war, he worked on painting, murals, tapestries, mosaics, sculpture and ceramic; he also collaborated in sets and costumes for theatrical shows. In 1924, he produced an avant-garde film called “Ballet mécanique”. And he also worked for ballet, being responsible for the costumes and sets of Darius Milhaud’s “La création du monde”.

His art enjoyed increasing success in various exhibitions in France, Switzerland and the United States. Between 1940 and 1945, he moved to New York, where he produced a number of huge mural paintings.
He died on 17th August 1955 at Gif-sur-Yvette in France.

From a NY Tinmes review of the Philadelphia show:


For example, in the exhibition’s prologue, where we see Léger formulating his personal fusion of Cubism and Futurism in the years leading up to the war, don’t miss Mondrian’s “Composition No. VI, Compositie 9 (Blue Facade),”

an implied still life/building that seems partly composed of beakers of blue sky. It is on loan from the Fondation Beyeler in Switzerland.

From a Washington Post review of the Philadelphia show: (images added)


Early paintings by Léger hang nearby, and the juxtaposition is striking. A 1913 painting, “Houses under the Trees,” seems to show an urban landscape seen from on high,

appears to show the world from multiple perspectives, not quite focused and in motion, as if bits and pieces of a film scene have been sliced together into a single, static image.... Compare his 1926 “Homage to the Dance” with advertisements and poster art of the same period, and you see where Léger’s real affinities lay. Léger’s painting shows two legs, one in black and the other in white, seemingly spinning on a turntable in bold red and yellow. The combination represents both time (with the legs serving as the hands of a clock) and the magical encoding of information in the phonographic disk; but for all these references to time and motion and noise, the image is stationary, sedate and silent. It entices because, like a product on offer in a shop window, it seems to contain legion of possibilities, pent up energy, the promise of dance, music and life.


An excellent review of the Venice show 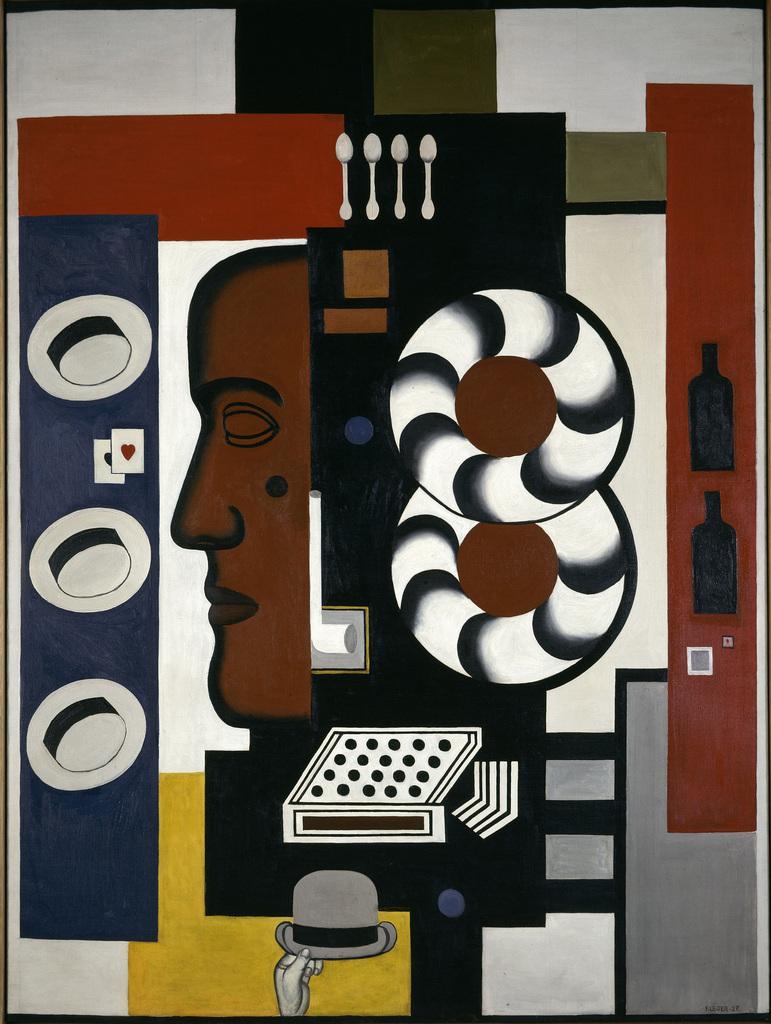 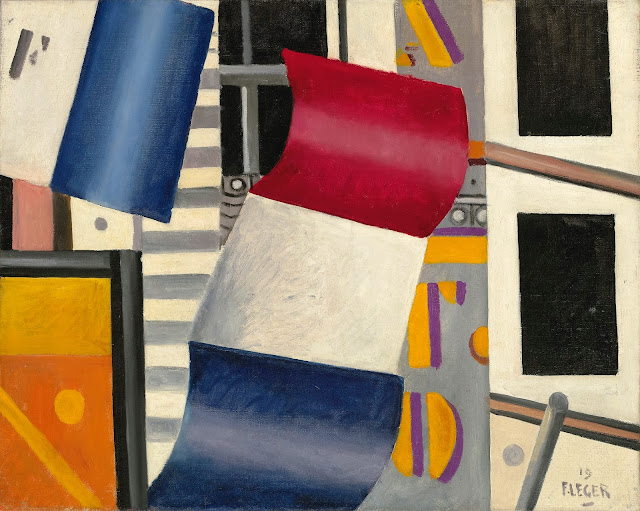 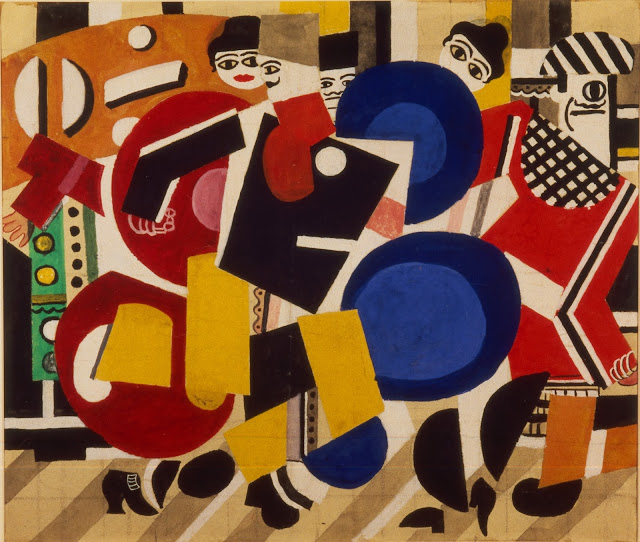 Posted by Jonathan Kantrowitz at 8:10 AM