In the 18th century, the Grand Tour of Europe was an educational and social rite of passage for wealthy young men, particularly from England and Germany. The journey, which could last a year or more, might involve a number of stops. But Rome was the essential destination.

Rome’s wealth of classical art and architecture and the glories of its Renaissance and Baroque periods were considered the pinnacle of Western civilization by the cultural elite of the time. Modern Rome awaited discovery as well, for during this period the capital of the Papal States underwent a dazzling urban and artistic renewal, with the construction of new public and private monuments such as the Spanish Steps and the Trevi Fountain. The Papacy also sponsored lavish festivals featuring elaborate fireworks displays accompanied by large amounts of food and wine. Aristocratic families, wishing to further elevate the manners, tastes and social standing of their sons through exposure to great works of art, fueled a phenomenon of cultural pilgrimage which became known as the Grand Tour, and eventually gave birth to more widespread tourism in the 19th century. In addition, the Grand Tour created a thriving market for prints of the great vedute, or views, of Rome and inspired generations of gifted artists skilled at capturing the sights and spectacles of the Eternal City.

The exhibition Lasting Impressions of the Grand Tour: Giuseppe Vasi’s Rome, at the Princeton University Art Museum from March 5 through June 12, 2011, revealed the rich variety of representations of 18th century Rome that were prompted by the intersection of a flourishing artistic community and the increasing demand for souvenirs of the Grand Tour. This phenomenon is examined through the particular lens of Giuseppe Vasi (1710 -1782), a prolific printmaker and architect who created a comprehensive, multi-volume series of more than 200 etchings of Rome for the tourist trade.

Born in Corleone, Sicily, Vasi lived and worked in Rome, where he was a contemporary of other notable vedutisti (view painters) such as Giovanni Paolo Panini and Giovanni Battista Piranesi, Vasi’s student. Vasi’s work, renowned for its exacting topographical accuracy and lively social observation, is viewed here in the context of the artistic and cartographic traditions from which it emerged and which it, in turn, influenced. An understanding of Vasi’s particular vision and its impact on ways of seeing and interpreting the city as a work of art is enhanced by a strong contextual component, demonstrated by loans of paintings, watercolors, drawings and prints from the Metropolitan Museum of Art, the Philadelphia Museum of Art and the Firestone and Marquand Libraries at Princeton University, as well as by several works from the Princeton University Art Museum’s own collections, that together create a compelling view of a great world capital in the age of the Grand Tour.

After an introduction to Vasi’s work as a whole, and in the context of late 17th and 18th century Roman cartography (including, most notably, 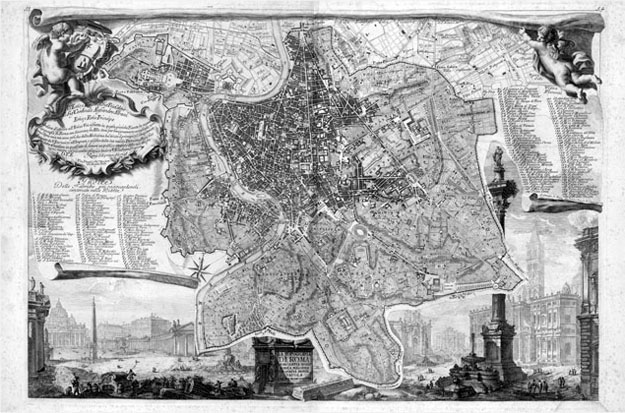 the exhibition situated a selection of Vasi’s Magnificenze (both individual plates and bound volumes) within the tradition of the Roman veduta by juxtaposing them with examples in different media by contemporaries including Canaletto, Panini and Piranesi. Finally, the exhibition concluded by presenting these popular images as souvenirs of the Grand Tour, complementing the prints with other collectibles, including a box of plaster casts and a reproduction of an ancient Roman bust of the emperor Caracalla. These, together with portraits and portrayals of identifiable Grand Tourists and Roman inhabitants by such artists as Nathaniel Dance, Pompeo Batoni and Giuseppe Ghezzi, create a compelling ensemble that brings the distant world of the Grand Tour and 18th century Rome closer to today’s spectator.

“Lasting Impressions of the Grand Tour is an exhibition that highlights the significance of the Grand Tour as an important aesthetic and cultural phenomenon,” said Laura M. Giles, Heather and Paul G. Haaga, Jr., Class of 1970, Curator of Prints and Drawings at the Princeton University Art Museum and curator of the exhibition at Princeton. “Vasi’s prints—of critical importance to historical studies in urbanism and architecture—serve as the springboard for a broad investigation into the representation of Rome and its impact on collecting practices and, indeed, on taste itself in the age of the Grand Tour. The exhibition also addresses the universal desire to capture a visual reminder of one’s journeys and experiences abroad. Before the invention of photography, Vasi’s etchings, either individually framed or displayed in bound volumes, served as souvenirs—high-end postcards—recalling the splendors visited after one returned home, and prompting others to embark on their own Grand Tour.”

Lasting Impressions of the Grand Tour: Giuseppe Vasi’s Rome was organized by the Jordan Schnitzer Museum of Art at the University of Oregon. Two University of Oregon faculty members, James Tice, professor of architecture and James Harper, associate art history, were the curators of the exhibition, and principal authors of 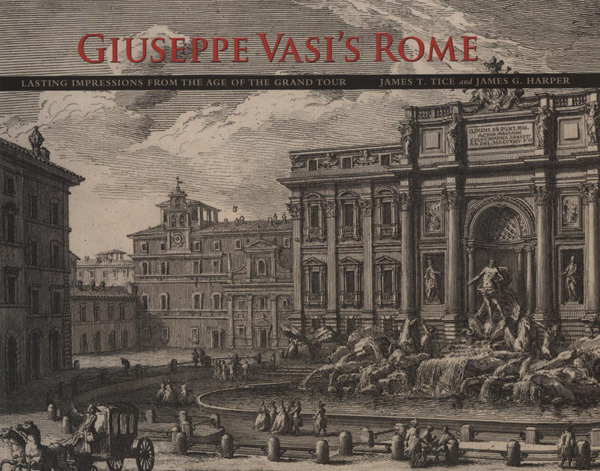 the fully illustrated catalogue published by the Schnitzer:


The catalogue for the exhibition Giuseppe Vasi's Rome: Lasting Impressions from the Age of the Grand Tour is the first to focus solely on this prolific artist, one of the most important printmakers of eighteenth-century Rome. Famous as the teacher of Piranesi, Vasi was a master in his own right, specializing in the depiction of the architectural monuments and urban spaces of the papal city. The exhibition highlighted all of Vasi's major works, including his ten volume Magnificenze di Roma, containing 240 detailed views of the city. Work by other artists, such as Nolli, Pannini, Vernet, Canaletto, and Piranesi, situate the artist's activity in several contexts, including the architecture of settecento Rome, cartography, social history, patronage, tourism, and the envisioning of the early modern cityscape. The richly illustrated catalogue celebrates the 300th anniversary of his birth and includes original essays by international Vasi scholars.

Posted by Jonathan Kantrowitz at 11:04 AM