The first-ever international loan exhibition devoted to the masterpieces of Dutch artist Aelbert Cuyp (1620-1691) was on view at the National Gallery of Art, West Building, October 7, 2001, through January 13, 2002. Aelbert Cuyp brought together a selection of approximately 45 paintings and an equal number of drawings that survey the remarkable achievement of this artist, who was particularly renowned for his majestic Dutch landscape paintings.

One of the foremost Dutch painters and draftsmen of the 17th century, Cuyp was a prolific artist whose career spanned the years between the late 1630s and the mid-1660s, the golden age of the Dutch Republic. Although renowned for views of his native countryside, Cuyp also painted portraits, biblical, and mythological scenes. His unique combination of Italianate atmospheric effects and his native Dutch landscape distinguishes his art from that of his contemporaries.

Cuyp was born in October of 1620 in Dordrecht, where he spent his entire artistic career. Dordrecht was a prosperous city with great economic power, a strong maritime fleet, and the distinction of being the oldest city in Holland.

Cuyp came from a family of artists: his father Jacob Gerritsz Cuyp was a successful portrait painter and his grandfather Gerrit Gerritsz Cuyp was Dordrecht's most important glass painter. Aelbert received his earliest training as a painter from his father, whom he assisted by supplying landscape backgrounds for portrait commissions, such as

Portrait of a Family in a Landscape (1641), which will be on view in the first room of the exhibition.

The exhibition provided an overview of Cuyp's career, from his early sketches and monochromatic views of the Dutch landscape, such as A Pier in Dordrecht Harbor (early 1640s) to his later light-filled pastoral scenes of shepherds and cattle, travelers winding past picturesque ruins, and majestic harbor views of his native Dordrecht. Some highlights from the exhibition follow.

A Farm with Cottages and Animals (c. 1642-1643), with its sun-drenched pasture populated by herds of cattle and sheep, is one of Cuyp's early depictions of the Dutch countryside. The harmonious relationship between man and nature illustrated in this painting is a theme found throughout his works.

Painted about 1640, Orpheus Charming the Animals depicts the story of the mythological hero who charmed animals with his singing and playing. The subject offered Cuyp the chance to illustrate this popular tale from Ovid's Metamorphoses and to portray a great variety of exotic animals, some of which he knew only from prints.

In the early 1640s, Cuyp traveled widely in Holland and along the Rhine River and from these excursions created beautiful drawings of The Hague, Amersfoort, Arnhem, Rhenen, and Utrecht. Cuyp was an exceptional draftsman, and many of his sketches were used to establish the fundamental framework for his compositions. The rolling countryside that Cuyp discovered along the Rhine provided him with a visual vocabulary that transformed the character of his art.

Herdsmen with Cattle (c. 1645) represents one of Cuyp's earliest endeavors in combining rural landscapes with peasants and herders tending their livestock. The scene is set in a panoramic landscape with steep hills reminiscent of those he saw along the Rhine. Dutch Italianate painter Jan Both, whom Cuyp probably met in Utrecht in 1641, inspired the painting's composition, colorful palette, and warm golden sunlight; characteristics of the visual vocabulary Cuyp would use throughout his career.

Cuyp's ability to convey the character of different times of the day and varied weather situations is evident in Dordrecht Harbor by Moonlight (c. 1643-1645), one of the artist's few surviving moonlit scenes.

River Landscape with Cows (1648-1650) is one of Cuyp's most characteristic pictures. Although he was not the first Dutch artist to portray a herd of cows, Cuyp imbued his cattle with a sense of idealized grace and nobility that is lacking in the work of his predecessors. During the 17th century, dairy farming assumed an important role in the Dutch economy and the cow came to symbolize the prosperity and well-being of the Netherlands.

Dordrecht was one of the most prominent subjects within Cuyp's oeuvre, with depictions of the city and its surroundings appearing in more than 25 paintings and 10 drawings. The broad and busy rivers passing near Dordrecht provided Cuyp with numerous opportunities to portray life along the river's edge. 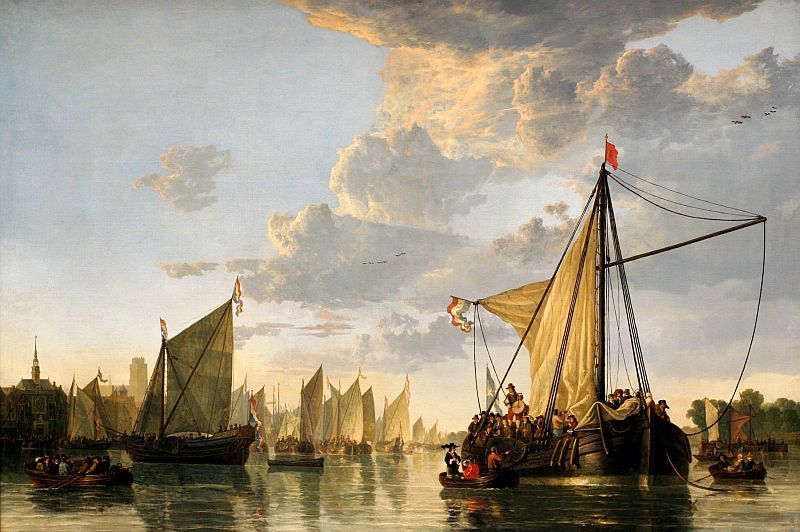 The Maas at Dordrecht (early 1650s) and Dordrecht from the North (mid-1650s) demonstrate the artist's remarkable sensitivity to the changing light and water conditions encountered on these inland waterways.

Michiel and Cornelis Pompe van Meerdervoort with Their Tutor (c. 1652-1653) is the first in a line of apparently popular equestrian portraits painted for members of a social class that would provide much of the artist's future patronage. Although numerous representations of the hunt exist, Cuyp was the only Dutch artist to create large-scale formal portraits of patrons engaged in this activity.

Examples in the exhibition include this work and Lady and Gentleman on Horseback (begun c. 1655, completed 1660/1665).

Ice Scene before the Huis te Merwede near Dordrecht (mid-1650s) is one of the three known winter scenes Cuyp painted. His sensitive rendering of the warm and atmospheric shimmering light reflecting off the frozen ground makes this canvas one of his greatest accomplishments. The artist based his depiction of the ruins on several sketches he made of the structure on his travels through the region.

River Landscape with Horseman and Peasants (c. 1660), painted at the height of Cuyp's career, is one of the artist's most accomplished pictures. The warm light of the late afternoon sun saturates the entire scene, covering the distant landscape in a golden haze that indicates moisture in the air. This painting reflects the distinctive characteristics of Cuyp's mature style: an increasing artificiality of light effects, the introduction of twisted saplings and large decorative leaves in the foreground, the use of a broad, panoramic viewpoint, and a planar technique of applying paint.

Posted by Jonathan Kantrowitz at 8:05 AM