The King Survey of the Great Basin, from 1867 to 1872, was the model for the other “great surveys” of the 19th-century American West. Rare and iconic works by Timothy H. O’Sullivan, the King Survey’s official photographer, were featured in an exhibition at The Nelson-Atkins Museum of Art from April 7 through Sept. 2, 2012. Keith F. Davis and Jane L. Aspinwall, respectively senior and assistant curators of photography at the Nelson-Atkins, organized Timothy O’Sullivan: The King Survey Photographs.

There were 60 photographs in the exhibition. Nine were borrowed from the American Geographical Society in Milwaukee, WIS; and the remainder were from the holdings of the Nelson-Atkins.

Accompanying the exhibition was a major book, co-authored by Davis and Aspinwall, with contributions by three esteemed scholars: John P. Herron, Francois Brunet, and Mark Klett.“O’Sullivan continues to influence generations of photographers because of his purely individual melding of fact and point of view,” said Aspinwall. “He was a complicated character, a hearty adventurer, a photographic explorer and innovator, with a bit of the daredevil thrown in the mix.”

The book emphasizes the context of O’Sullivan’s photographs: his best known images in relation to the complete body of his survey work, the function of the photographs within the survey enterprise, and the scientific and cultural importance of the survey itself. In creating the book, Davis and Aspinwall became engaged in their own kind of “survey,” working from opposite ends of the subject back toward a common center.

“Jane focused on the evidence of the photographs themselves, tracking down every view and putting them into chronological order,” said Davis. “I began with an overview of the history of western exploration and then attempted to describe the King Survey and O'Sullivan's career in detail. The meeting point, the crux of the whole project, was O'Sullivan's remarkable photographs.”

Davis became fascinated with O’Sullivan’s work 40 years ago, and his respect for the richness and longevity of his work has increased over the years.

“Someone once said that writing a biography usually entails a process of ‘falling out of love’ with one's subject,” said Davis. “That's absolutely not true in this case. This exhibition and book have resulted in a newer and deeper admiration for a truly one-of-a-kind photographic achievement. That's O’Sullivan’s gift to us–and we want to share it.”

Framing the West: The Survey Photographs of Timothy H. O’Sullivan

“Framing the West: The Survey Photographs of Timothy H. O’Sullivan” was the first major exhibition devoted to this remarkable photographer in three decades. The exhibition was on view at the Smithsonian American Art Museum in Washington, D.C., from Feb. 12 through May 9, 2010. The museum was the only venue for the exhibition. “Framing the West”—a collaboration between the Smithsonian American Art Museum and the Library of Congress—offered a critical reevaluation of O’Sullivan’s images and the conditions under which they were made, as well as an examination of their continued importance in the photographic canon. It features more than 120 photographs and stereo cards by O’Sullivan, including a notable group of King Survey photographs from the Library of Congress that have rarely been on public display since 1876. The installation also includes images and observations by six contemporary landscape photographers that comment on the continuing influence of O’Sullivan’s photographs. Toby Jurovics, curator of photography, is the exhibition curator.

“Timothy H. O’Sullivan is widely recognized as an influential figure in the development of photography in America, so I am delighted that we have partnered with our colleagues at the Library of Congress to present this new assessment of his work and to expose a new generation to his forceful images,” said Elizabeth Broun, The Margaret and Terry Stent Director of the Smithsonian American Art Museum.

“In the years following the Civil War, the West was fertile ground for American photographers, but Timothy H. O’Sullivan has always stood apart in his powerful and direct engagement with the landscape,” said Jurovics. “Almost a century and a half after their making, his photographs still speak with an unparalleled presence and immediacy.”

O’Sullivan was part of a group of critically acclaimed 19th-century photographers—including A.J. Russell, J.K. Hillers and William Bell—who went west in the 1860s and 1870s. O’Sullivan was a photographer for two of the most ambitious geographical surveys of the 19th century. He accompanied geologist Clarence King on the Geologic and Geographic Survey of the Fortieth Parallel and Lt. George M. Wheeler on the Geographical and Geological Surveys West of the 100th Meridian. During his seven seasons (1867 – 1874) traversing the mountain and desert regions of the Western United States, he created one of the most influential visual accounts of the American interior.

His assignments with the King and Wheeler surveys gave O’Sullivan the freedom to record the Western landscape with a visual and emotional complexity that was without precedent. His photographs illustrated geologic theories and provided information useful to those settling in the West, but they also were a personal record of his encounter with a landscape that was challenging and inspiring.

Of all his colleagues, O’Sullivan has maintained the strongest influence on contemporary practice. The formal directness and lack of picturesque elements in his work appealed to a later generation of photographers who, beginning in the 1970s, turned away from a romanticized view of nature to once again embrace a clear, unsentimental approach to the landscape. 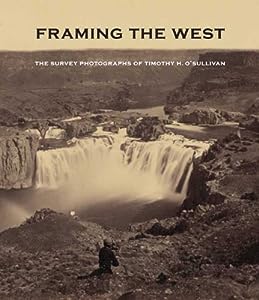 O’Sullivan (1840-1882) was born in Ireland. He emigrated to the United States with his family at the age of two, eventually settling in Staten Island, N.Y. Biographical details about O’Sullivan are spare, yet he is thought to have had his earliest photographic training in the New York studio of portrait photographer Mathew Brady. He is believed to have accompanied Alexander Gardner to Washington, D.C., to assist in opening a branch of the Brady studio in 1858, and when Gardner opened his own studio in Washington in 1863, O’Sullivan followed. O’Sullivan first gained recognition for images made during the Civil War, particularly those from the Battle of Gettysburg, and 41 of his images were published in Gardner’s Photographic Sketch Book of the War. O’Sullivan’s experience photographing in the field helped earn him the position as photographer for King’s survey. After his survey work, he held brief assignments in Washington with the U.S. Geological Survey and the U.S. Treasury. O’Sullivan died of tuberculosis on Staten Island at the age of 42.


Posted by Jonathan Kantrowitz at 7:01 AM