Thomas Gainsborough, 1727-1788, the first comprehensive retrospective ever seen in the United States of works by one of the masters of 18th-century portraiture and landscape painting, was on view at the National Gallery of Art, West Building, February 9 through May 11, 2003. Sixty-three paintings and 31 drawings, 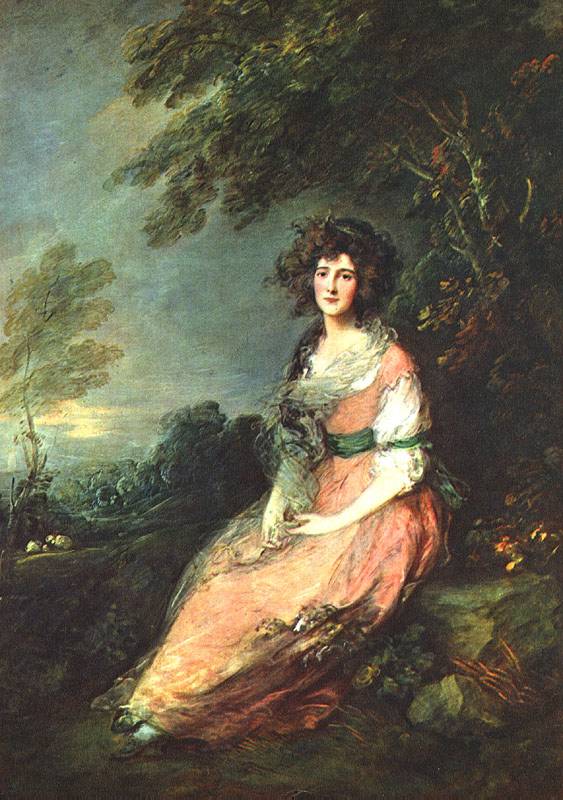 and works rarely seen outside of England such as Mr. and Mrs. William Hallet (The Morning Walk) (1785), illustrated the range, richness, and originality of this great British artist. The last major Gainsborough exhibition was held at Tate Britain in 1980.

The exhibition was organized by Tate Britain--where it was been on view from October 24, 2002 until January 19, 2003--in association with the National Gallery of Art, Washington, and the Museum of Fine Arts, Boston, where it was on view June 15 through September 14, 2003.

The National Gallery of Art exhibition, which was organized chronologically, included fifteen works not seen at the Tate. It was the exclusive U.S. venue for the paintings

The exhibition begins with portraits Gainsborough painted early in his career while living in London and Sudbury, including

When commissions proved elusive in Sudbury, Gainsborough settled with his wife and two daughters in Ipswich, a large port city with a military fort. Improving steadily in skills and reputation, Gainsborough finally saw his career advance when he moved to Bath in 1759. At this fashionable holiday resort, with its constant flow of wealthy patrons, the artist achieved instantaneous success.

This success was represented in the exhibition by the superb Uvedale Tomkyns Price (c. 1760-1761) 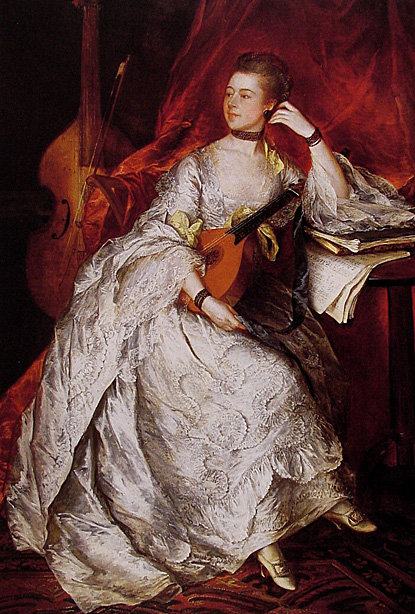 and Ann Ford, Later Mrs. Philip Thicknesse (1760)--works which have a powerful directness matched only by Sir Joshua Reynolds, one of Gainsborough's contemporaries.

and of the celebrated Italian dancer, Giovanna Baccelli (1782), which reveal the artist's growing confidence and ambition.

Although Gainsborough made his living in portraits, he found greater pleasure in painting landscapes.

Some of his early approaches to landscape painting were be represented in the exhibition by major pictures that helped to establish his career, including Gainsborough's Forest (Cornard Wood) (c. 1746-1748) and Holywells Park, Ipswich (c. 1748-1750).

The exhibition continued with a selection of the major works that Gainsborough chose for public exhibition in London during his lifetime. The spectacular procession of glamorous full-length portraits, including The Linley Sisters (1772) and Grace Dalrymple, Mrs. John Elliott (1778), gave visitors a sense of how dramatic the annual shows at the Royal Academy of Arts must have been. Further aspects of his portraiture were shown in his sympathetic and informal depiction of the art dealer, James Christie (1778); the glamorous picture of Isabella, Viscountess Molyneux (1769), which he showed at the first Royal Academy exhibition in 1769; and the pendant portraits of Lord and Lady Ligonier shown in 1771 when the sitters were involved in a very public divorce.

Gainsborough's success in portraiture is due to the artist's astute attention to the finest points of the sitter's actual appearance, the choice of glamorous pose and costume, and the ability to project, to an astonishing degree, the subject's personality, as seen in The Duke and Duchess of Cumberland, Attended by Lady Elizabeth Luttrell (c. 1783-1785).

His portraits of women portrayed as intellectual and cultured include such works as Mrs. Lewes Peak Garland, Formerly Miss Indiana Talbot (c. 1775) and Lady Brisco (c. 1776).

Gainsborough thought of himself first as a painter of landscapes, creating more than 200 of them over the course of his career. His depictions of the landscape are often considered as embodying timeless ideals of the English countryside, and his rural vision was complex and marked by contemporary concerns about the agricultural economy. The exhibition presented major examples of some of the exquisite landscape imagery he created, including The Harvest Wagon (1767), Romantic Landscape with Sheep at a Spring (c. 1783), and Cottage Girl with Dog and Pitcher (1785).

Gainsborough's achievement as a landscape artist is equally evident in his drawings, which stand as works of art in their own right and not merely studies for his oil paintings. Rendered in pencil, chalk, or charcoal and depicting scenery as well as figures, these freely imagined compositions display an easy flow of elements and extraordinarily vigorous handling.

The final works in the exhibition include some of Gainsborough's most accomplished portraits, including the remarkable Mrs. Siddons (c. 1785) and Mrs. Richard Brinsley Sheridan (c. 1785-1787)--the artist's crowning achievement painted at the end of his career. With these paintings, Gainsborough tested the distinction between "finished" and "unfinished" and continued to explore likeness and character in powerfully original ways. The experimental qualities of Gainsborough's art will be most apparent in such works as his mythological painting Diana and Actaeon (c. 1784-1786).

The installation at the National Gallery was organized by Franklin Kelly, the Gallery's senior curator of American and British paintings. Thomas Gainsborough, a fully illustrated catalogue published by the National Gallery of Art, Washington in association with Tate Publishing,

Posted by Jonathan Kantrowitz at 12:22 PM