In a 70-year career, which spanned much of the 20th century, André Kertész (1894-1985) made some of the most deceptively simple yet compelling and poetic photographs ever created. André Kertész, on view February 6 through May 15, 2005, at the National Gallery of Art, was the first major Kertész retrospective of vintage photographs held in the United States; also, the show will present works never before exhibited or reproduced. Following its premiere in Washington, D.C., the exhibition traveled to the Los Angeles County Museum of Art, where it was on view June 12 through September 5, 2005. 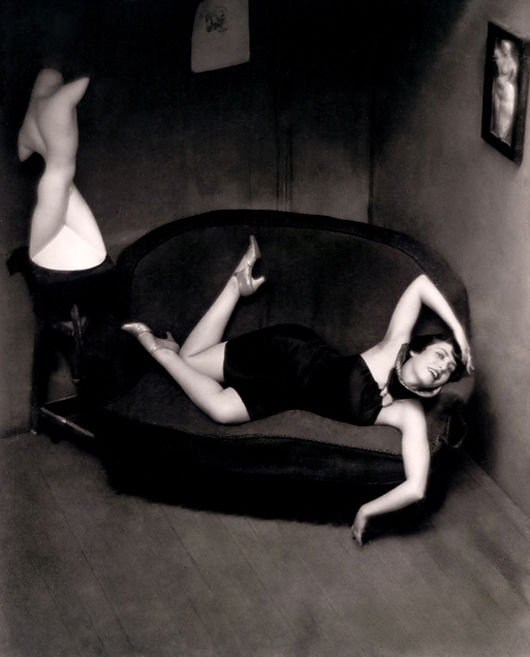 Satiric Dancer, both from 1926--120 objects featured photographs from all periods of Kertész's exceptionally rich and diverse body of work: from his early photographs of his native Budapest made in the 1910s and early 1920s, to his studies of Paris in the 1920s and 1930s, and the final series of photographs he took of New York in the 1970s and 1980s, shortly before his death.

Arranged chronologically, the exhibition surveyed the development of Kertész's oeuvre. It demonstrated his deep involvement with other artists of his time and shows how he used the camera to examine his relationship to the people and things around him. Kertész was revealed as emblematic of a generation of 20th-century artists whose migrations allowed them to rethink the nature and aims of their art as they sought to reconcile their native sensibilities with new cultures.

Born Kertész Andor, he began photographing in 1912. When he served in the Austro-Hungarian army in World War I, he packed a camera. He took photographs not of the battles or destruction of the war, but of soldiers during their rare moments of leisure. After the war, he became fascinated with recording scenes of active, physically fit young people exuberantly enjoying life, such as his portrait of his brother, Jen Kertész (1919-1924). His circle of friends at this time grew to include many painters and graphic artists who sought to find the roots of a new Hungarian identity through a celebration of Hungary's rural past and its peasant life.

The influence of their art and ideas can be seen in such Kertész photographs as Blind Musician, Abony (1921).

In 1925, after several desultory years working in a variety of jobs in Budapest, Kertész Andor decided to pursue a career in photography. Like so many artists and intellectuals of the period, he moved to Paris, where he changed his name to André Kertész. Never fluent in French, he was closest to his fellow Hungarians, including the painters Lajos Tihanyi, Gyula Zilzer, and István Bethy. He also met and photographed such luminaries as Marc Chagall, Colette, Sergei Eisenstein, Tristan Tzara, and many others.

One of his best-known works, Chez Mondrian (1926), depicts Mondrian's vestibule.

Kertész's poetic celebrations of traditional Parisian life and culture--its cafés, fairs, and parks; its streets, clochards, and the Seine--captured the essential mystery of the French capital. During his years in Paris he created some of his most well-known works, including

and Clock of the Académie Française (1929). Kertész was fortunate to arrive in Paris at the moment when European illustrated magazines were hungry for photographs to fill their pages. He sold his work to--and gained wide recognition in--such French periodicals as Vu, L'Art Vivant, and Variétés and the German publications Berliner Illustrirte Zeitung and UHU.

In 1936, lured by a lucrative contract to establish a fashion studio for a picture agency in New York, Kertész moved to the United States. He soon realized, though, that he was not adept at studio work and that his European sensibility did not merge easily with an American way of doing business. However, the growing hostilities in Europe prevented him from returning there, and he remained in America for the rest of his life. Kertész worked for Harper's Bazaar, House and Garden, and other magazines. He also made photographs for himself that express his fascination with the spectacle of New York City, and his growing sense of isolation and loneliness.

In 1962, after fifteen years, Kertész quit his job at House and Garden. At the same time, his work began to find broad favor with an American audience increasingly fascinated with European photography of the period preceding World War II. By the mid-1970s, a succession of high quality books, exhibitions, and portfolios made Kertész a rising star in the photography world. The final years of Kertész's life were filled with honors and awards, perhaps the greatest of which was receiving the decoration of the Legion of Honor from the French government.

As a sign of his deeply felt connection to the country where he had first achieved significant artistic success, Kertész made plans to donate his archive to the French government, including a lifetime of notes and correspondence as well as his negatives and contact sheets. He also founded The André and Elizabeth Kertész Foundation in New York and dedicated it to supporting the arts and preserving his legacy. He continued to explore the world through his camera with his characteristic playful curiosity almost up to his death; he died at home in New York on September 28, 1985.