Portraits by Ingres: Image of an Epoch


Portraits by Ingres: Image of an Epoch, was on view in the National Gallery of Art, Washington, 23 May through 22 August 1999. The exhibition presented almost forty paintings and sixty drawings by Jean-Auguste-Dominique Ingres (1780-1867), one of the greatest portrait painters and most brilliant draftsmen of the nineteenth century. This will be the first American exhibition of Ingres' vivid oil and dazzlingly detailed pencil-drawn portraits from every period of his long career. It will also be the most comprehensive display of his portraiture since the centennial exhibition of 1967 in Paris.

The exhibition was arranged chronologically with loans of many of Ingres' most famous and beautiful works coming from museums and private collections worldwide. Lenders include the Musée du Louvre, Paris; The Metropolitan Museum of Art, New York; The Frick Collection, New York; The Art Institute of Chicago; the Musée Ingres, Montauban; the State Hermitage Museum, St. Petersburg; the J. Paul Getty Museum, Los Angeles; and from London, The National Gallery, and the British Museum.

Ingres the Portrait Painter and Draftsman

It is for his portraits that Ingres is most admired today although he regarded his history paintings and allegories as his most important works. The portraits reveal Ingres as an innovative and virtuoso painter whose technical skills were unmatched. He brilliantly depicted his contemporaries, including great figures of the day, and captured the elaborate changing fashions of two-thirds of the nineteenth century in Paris and Rome from 1800 to 1867, the year of his death. Since many of the most powerful, creative, and wealthy figures of the day posed for him, the portraits as a group convey a vivid picture of the society and luxurious fashions of Ingres' time. The artist's career spanned the closing years of the Revolutionary era, the first empire of Napoleon Bonaparte, the Bourbon Restoration, and the second empire in France.

Napoleon I on his Imperial Throne (1806), where the triumphant leader is depicted in regal magnificence.

Ingres' most beautiful early portraits of women in the exhibition include the arresting Madame de Senonnes (1814) in sumptuous fabrics along with the motif of the mirror reflection that the artist was to use many times.

Ingres also frequently depicted his own circle of artist friends such as the landscape painter François-Marius Granet (1809) and the renowned composer Charles Gounod (1841). Visitors to the exhibition had a rare and extraordinary opportunity to see the refinement, originality, and beauty of Ingres' portraits, including the most famous of them all, Louis-François Bertin (1832), dubbed by Manet as the "Buddha of the bourgeoisie."

The culmination of Ingres' career as a portraitist came in his later years when he painted with undiminished inventiveness a series of the great society beauties of Second Empire Paris, including the elegant Vicomtesse d'Haussonville (1845) and with the celebrated seated version of 1856: Madame Moitessier (The National Gallery, London) in all the opulence of her setting and costume (her spectacular white silk dress, bursting with bouquets of roses, was considered the height of Second Empire fashion).

Accompanying the oil portraits was a rich selection of sixty of Ingres' meticulous pencil-drawn portraits rarely seen, which reveal his remarkable talent for elegant, unforced poses and incisive precision. Among these will be Self-Portrait (1822) and The Alexandre Lethière Family (1815), as well as Lucien Bonaparte (c. 1807), the younger brother of Napoleon, along with many of his celebrated portraits of British visitors to Rome. Pencil drawings that explore Ingres' working methods for his oil portraits will also be on view. 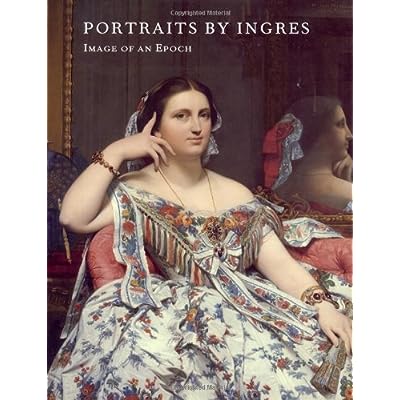 Accompanying the exhibition was a fully illustrated catalogue, Portraits by Ingres: Image of an Epoch, that features essays by the curators of the exhibition and other scholars including Georges Vigne of the Musée Ingres, Montauban, and independent Ingres specialists Dr. Andrew Shelton and Dr. Hans Naef, with an introduction by Professor Robert Rosenblum, professor of Fine Arts, New York University and curator, Solomon R. Guggenheim Museum, New York. The catalogue was published by the Metropolitan Museum of Art and distributed by Harry N. Abrams Inc., New York.

Posted by Jonathan Kantrowitz at 6:15 AM