Exploring the American Landscape Through Photography

"The Land Through a Lens: Highlights from the Smithsonian American Art Museum," a traveling exhibition opened May 20, 2003 at the Samuel P. Harn Museum of Art at University of Florida in Gainesville. It featured 84 photographs from the early years of photography in the 1850s through the 20th century. Included in this exhibition are works by influential early photographers Eadweard Muybridge, Timothy O'Sullivan and Carleton Watkins, as well as modern masters such as Ansel Adams and Aaron Siskind. Contemporary photographers such as William Christenberry, Emmet Gowin and Richard Misrach brought the collection into the present day. "The Land Through a Lens" traced America's fascination with the land and the way artists transform it into symbols and signature images.

"Americans have long had an intense and complex relationship with the land, which has inspired artists in every generation," said Elizabeth Broun, the museum's Margaret and Terry Stent Director. "Since 1988, the Smithsonian American Art Museum has placed a special emphasis on collecting landscape photographs that express an amazing variety of attitudes and ideas about this relationship."

Soon after photography was invented in 1839, photographers were outside documenting America's rural and regional views and geologic wonders. The earliest photograph in the exhibition is Alex Hesler's "Falls of Minnehaha, Minnesota" from about 1855. Hesler's views of these falls inspired Henry Wadsworth Longfellow to write his epic poem, Hiawatha.

Most 19th-century photographers worked on commission from industry or the government. George Barnard, for example, recorded Civil War battle sites while William Bell worked on government-sponsored geological and exploration surveys. Andrew Russell and Charles Savage helped to lure investors and travelers westward with the images they made along the Central Pacific and Union Pacific Railroads. At the same time, well-to-do Americans were hanging framed images by such photographers as Carleton E. Watkins and Eadweard Muybridge on their parlor walls.

Watkins was one of the first photographers to go west, arriving in Yosemite in 1861. In "The Three Brothers, Yosemite" (about 1865/printed after 1875), on view in the exhibition, the mountain peaks are almost apparitions, yet reflected in the lake they are curiously vivid. Watkins' views of Yosemite were so popular that they inspired the federal government to preserve the area as a national park. Timothy H. O'Sullivan accompanied scientific expeditions to the American West, hauling a tremendous amount of photographic equipment across the difficult terrain. He made "Tufa Domes, Pyramid Lake, Nevada" in 1867 while working on a survey headed by Clarence King, a strong-willed geologist who believed the earth had been formed by a series of violent upheavals of which this landscape was evidence.

O'Sullivan's "Cañon de Chelle, Walls of the Grand Cañon about 1200 Feet in Height" from 1873 is one of the most famous 19th-century landscape views of the West. The composition invites the viewer into the scene, tracing a central course through the landscape.

William H. Jackson was the most prolific and long-lived photographer of the American West, working from the 1870s well into the 1900s. Jackson made "Grand Cañon of the Colorado" (about 1880), an image of the West's most famous gorge, after he opened a studio in Denver. This mammoth-plate photograph, so called because of the nearly 2-feet high glass-plate negative on which the image was made, was intended to be hung on a wall or displayed in an album.

As the 20th century dawned, preservation issues took center stage in public debates with the help of photography. Many artists, most notably Ansel Adams, featured breathtaking views of nature untouched by development, which influenced the movement to create a national park system. Adams' photographs defined the aesthetic standards for landscape photography throughout the 20th century with their sharp detail and broad range of tonalities. "Winter Sunrise, Sierra Nevada from Lone Pine, California" (1944/printed 1978) is one of his most popular images. The dramatic contrast of light and shadow shows the world as an uninhabited wilderness with the crisply etched, snowy pinnacles of the Sierra Nevada looming over a band of nearly black foothills. The lone horse in the photograph suggests domestication and the endurance of natural beauty.

Modern and contemporary photographers have recorded both the forces of nature and the impact of human settlement and development. Lewis Baltz's documentation of suburban sprawl, Emmet Gowin's views of the aftermath of Mount St. Helens' spectacular eruption and Stuart Klipper's images of open spaces exemplify some of these issues.

As a modern-day explorer in the American West, Karen Halverson balances natural and man-made beauty in "Hite Crossing, Lake Powell, Utah" (1988). Leaving her camera shutter open for a long time blured the waters of Lake Powell. The unexpected brightness of the sandstone shore in the foreground comes from the headlights of the photographer's car. This artificial light is a reminder, as is the ironic title of this work, that the West is not the untouched place of popular imagination. The Glen Canyon Dam formed Lake Powell and flooded a once-thriving town where settlers could cross the Colorado River by ferry.

In "Burning Railroad Tie, Burlington Cut near Catherine Creek, Klickitat County, Washington" (1987/printed 1988), Terry Toedtemeier photographs the railroad bed along the Columbia River between Oregon and Washington. The subject was first photographed by Watkins in 1867 and has remained largely unchanged. Toedtemeier's version includes surreal effects such as a smoking railroad tie that seems to have ignited for no apparent reason and the hulking shadow of a rock monolith.

Other regions of the United States are equally captivating to photographers. A major theme in William Christenberry's art is the tension between past and present that is felt in the modern South. In "Red Soil and Kudzu—near Moundville, Alabama" (1980/printed 1981), Christenberry, a native Alabaman, fills more than half the frame with kudzu vine, leaving the viewer wondering about what is underneath.

Allen Hess also examines the past's role in the present in his photographs of the South. "Oak Alley Plantation, River Road, Vacherie, Louisiana" (1983/printed 1989) presents orderly ranks of veteran live oaks that converge symmetrically on the 2-story high white columns of an antebellum Greek Revival plantation house along Louisiana's Great River Road. Frozen in time, the house is suspended between the storied past and its current reincarnation as a bed and breakfast.

Terry Evans is concerned with how Americans use and change the land. She photographed the prairie for more than 25 years, working from a small plane at low altitudes to evoke the Edenic innocence of virgin Kansas prairie, as in "Konza Prairie" (1982). The trace of a pick-up trail across the upper part of the frame reminds viewers that Konza Prairie is a carefully managed preserve in the midst of acres of farmland.

In "Hawaii IV," from the portfolio "Hawaii" (1978/printed 1980), Richard Misrach reveals a different side of nature, one in which complexity, density and impenetrability are virtues. Using artificial lighting at night and a large presentational format enabled Misrach to show abstract random patterns created by vegetation. 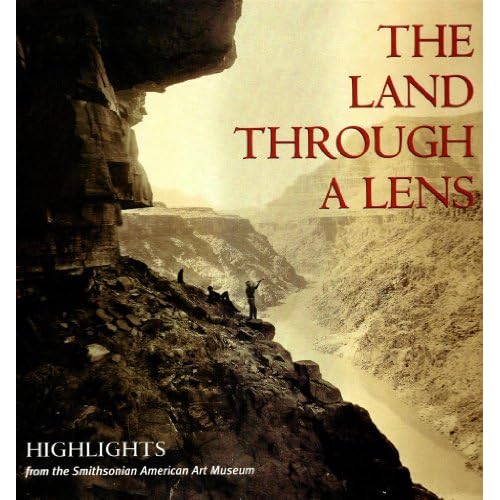 To accompany the exhibition, the Smithsonian American Art Museum is publishing a lavishly illustrated souvenir book, "The Land Through a Lens: Highlights from the Smithsonian American Art Museum," written by Andy Grundberg, administrative chair of the photography department at the Corcoran College of Art and Design. The book features 52 color illustrations and brief discussions of the individual artworks in the exhibition.

Posted by Jonathan Kantrowitz at 6:03 AM