The Landscapes of Sanford R. Gifford, a major retrospective of the innovative paintings by 19th-century American landscape painter Sanford R. Gifford (1823-1880), who is known as a master of light and atmospheric detail, was presented in the West Building of the National Gallery of Art from June 27 through September 26, 2004. The first major exhibition of Gifford's work in more than 30 years featured 72 paintings that illustrate the artist's travels in North America, Europe, and the Middle East.

Exclusive to the exhibition at the National Gallery of Art were three major paintings: a pair of large-scale oval canvases entitled Morning in the Adirondacks and Sunset in the Shawangunk Mountains (both 1854) from the Westervelt-Warner Museum of American Art, on loan from the Warner Collection of Gulf States Paper Corporation, Tuscaloosa, Alabama,

and View from South Mountain in the Catskills (1873), on loan from the St. Johnsbury Athenaeum, St. Johnsbury, Vermont.

Organized chronologically, with groupings of related works, the exhibition included many of Gifford's "chief pictures." To give insight into the artist's remarkable creativity, the exhibition also included a selection of his mid-size canvases, as well as smaller, cabinet-size sketches, studies, and reduced versions of major paintings. 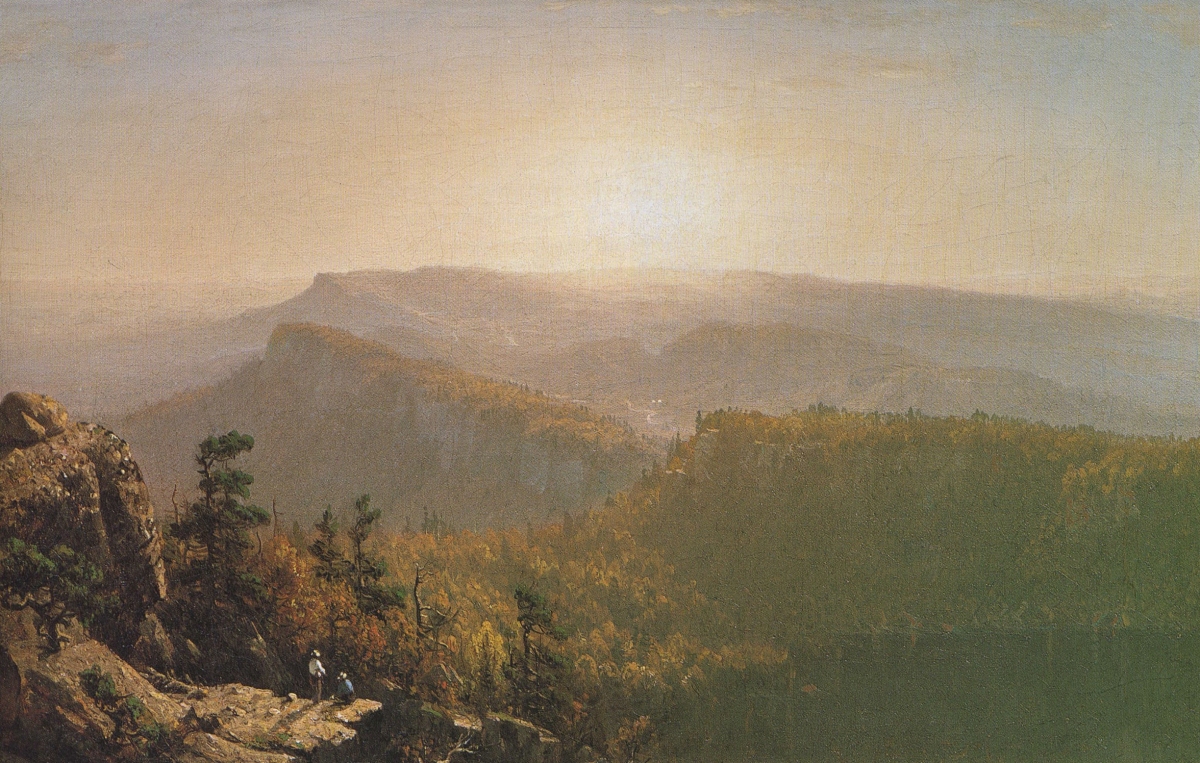 Some of the mid-size paintings, such as The Shawangunk Mountains (1864), were chosen because of their relationship to larger works that remain unlocated, while others offer clues to Gifford's process of developing the major pictures.

Major works in the exhibition included Lake Nemi (1856-1857), the first important painting in which the artist employed what became his trademark--the setting sun as a radiant focal point, its light a tonal unifier of his compositions. Exhibited at the National Academy of Design in New York in 1858, the painting helped establish Gifford as one of the premier representatives of painters who would eventually be known as the Hudson River School.

The artist's fascination with the transfiguring effects of light on the natural landscape is apparent in works such as A Gorge in the Mountains (Kauterskill Clove) (1862) in which the radiant afternoon sun hovers over an idyllic mountain valley. The work is presented in the exhibition with several related oil sketches.

Gifford's aesthetic of light and atmosphere is demonstrated in his treatment of American panoramic subjects, such as Mansfield Mountain (1859),

and The Artist Sketching at Mount Desert, Maine (1864-1865), the last notable for its inclusion of an artist (most likely Gifford) in the scene.

The exhibition also included a number of paintings inspired by the artist's Civil War experiences, such as the melancholy landscape, Hunter Mountain, Twilight (1866).

Nearly a quarter of the exhibition was devoted to works inspired by Gifford's travels abroad, including Siout, Egypt (1874), Isola Bella in Lago Maggiore (1871), and The Ruins of the Parthenon (1880).

Born and raised in the center of the Hudson River Valley, Sanford Gifford came from a family that supported and encouraged his artistic leanings, and whose prosperity meant he could pursue painting without financial worries. Gifford began training in New York City to be a portrait painter, but--inspired by the work of the American landscapist Thomas Cole--turned to landscape painting. Gifford spent the summer of 1846 touring and sketching in the Catskill and Berkshire mountains. By 1847, he had begun to show his work at the American Art-Union and the National Academy of Design in New York, where he was elected an associate in 1850 and an academician in 1854.

In 1855, Gifford traveled to Europe, where he spent two-and-a-half years visiting the great repositories of art and sketching scenery in England, Scotland, France, the Low Countries, Germany, Switzerland, and Italy. In England, he admired the color and light in the paintings of J.M.W. Turner, and discussed his work with the critic John Ruskin. Gifford was also impressed by the work of the French landscape painters of the Barbizon school, but wrote in his journal of the dangers of surrendering to a particular method or school of painting, lest they "usurp the place of Nature."

When Gifford returned to the United States in 1857, he took up quarters in the new Tenth Street Studio Building in New York City but left it nearly every summer to sketch in the countryside. Favorite settings in this period were the Catskills, the Adirondacks, the Green Mountains in Vermont, the White Mountains in New Hampshire, and various locales in Maine and Nova Scotia.

During the early years of the Civil War, Gifford served in New York's renowned Seventh Regiment. In 1868 Gifford went abroad for a second and last time, spending more than a year traveling in Europe and the Middle East. Along with notable artists and civic leaders of the day, he was a founder of The Metropolitan Museum of Art in 1870. After his death in 1880, he was honored with the Metropolitan's first monographic retrospective and a memorial catalogue of his known pictures.

The exhibition was organized by Franklin Kelly, senior curator of American and British paintings, National Gallery of Art, and Kevin J. Avery, associate curator, with the assistance of Claire A. Conway, research assistant, department of American paintings and sculpture, The Metropolitan Museum of Art, New York.

The exhibition was accompanied by a fully illustrated catalogue, which featured essays by the exhibition's co-curators Kevin Avery and Franklin Kelly, and by Eleanor Jones Harvey, Luce Center Curator, Smithsonian American Art Museum, and Heidi Applegate, doctoral candidate, Columbia University. Published by the Metropolitan Museum of Art and distributed by Yale University Press, the catalogue is 200 pp., 148 black & white and 73 color illustrations.

Related article, more images
Posted by Jonathan Kantrowitz at 6:43 AM