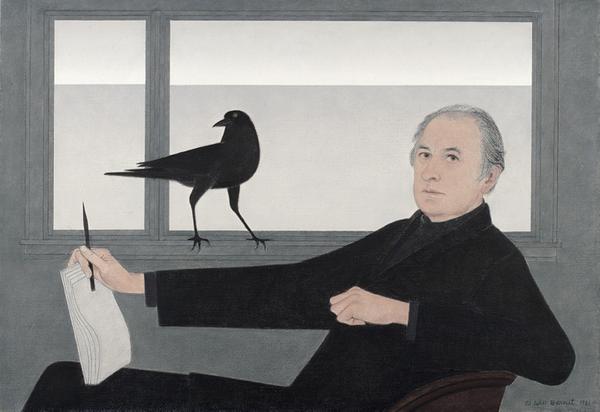 One-hundred years in the making, Will Barnet at 100 – the artist’s first New York museum retrospective – opened at the National Academy Museum on September 16, 2011 and continued through December 31.

Note - a similar exhibition,WILL BARNET AT 100: Eight Decades of Painting and Printmaking (March 27 – May 2012) was organized at the Boca Raton Museum Of Art by The Harmon-Meek Gallery, Naples, Florida, which has represented Barnet since 1973. 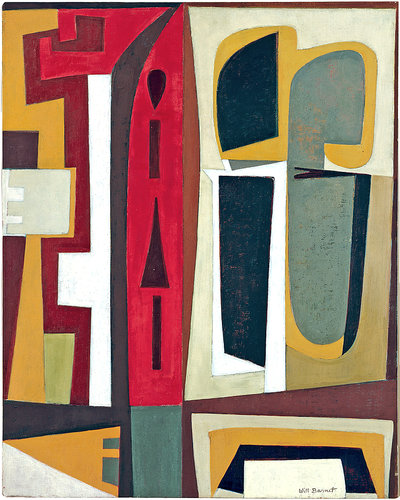 Will Barnet's "Male and Female" (1954) Whitney Museum of American Art

Barnet has work in virtually every major museum in the United States, and his figurative and abstract paintings and prints continue to advance the fine arts. During a career that has spanned over 80 years, Barnet was a printer for major artists, including Louise Bourgeois, a teacher of Eva Hesse, James Rosenquist, and Tom Wesselmann.

Will Barnet at 100 included 43 paintings and prints that range in date from 1935 – five years after he moved from Beverly, MA to New York City at age 19 – through 2008. The loan exhibition, which included works from numerous public and private collections, was organized by Bruce Weber, Senior Curator, Nineteenth and Early Twentieth Century Art, National Academy Museum, and was accompanied by an illustrated catalogue.


Barnet was born in Beverly, MA in 1911. He moved to New York in 1930 and embarked on an 80-year career as an artist, printmaker, and instructor. Barnet taught at the Art Students League (1941-1979) and Cooper Union (1945-1967) in New York and at the Pennsylvania Academy of the Fine Arts (1967-1992) in addition to shorter term appointments. He also continues to conduct workshops and critiques at the National Academy School, which he has done since 2001.

The works in the exhibition traced Barnet’s explorations of figuration and abstraction, including WPA-tinted realism, Hard-Edged abstraction, and Indian Space painting, with its fields of color and imagery inspired by indigenous art of North and South America. An impassioned student of the visual arts of many cultures, Barnet’s investigations were informed by old and modern masters, Byzantine art, Hopi bowls, geometric patterns found in ancient Peruvian textiles, and American folk art.

The arc of Barnet’s work runs from realism in the 1930s, when he worked primarily as a graphic artist and printer, to increasingly abstract work in the 1940s, full abstraction in the 1950s and early 1960s, and a figurative style in the 1960s through 2003, when he returned to abstraction. 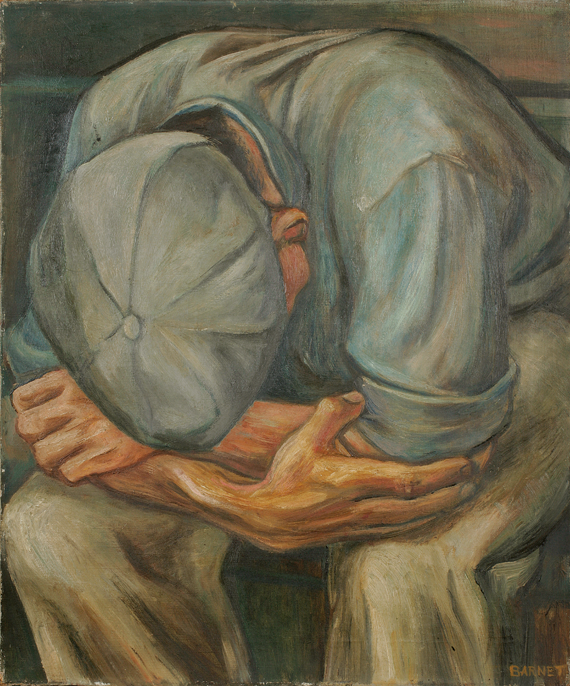 Highlights of the exhibition included Idle Hands, from 1935, in which a deflated man is seated, his elbows resting on his knees and arms crossed as his torso slumps forward. With a cap covering his downcast face, the figure illuminates the Depression-era plight of millions of people unable to find work. 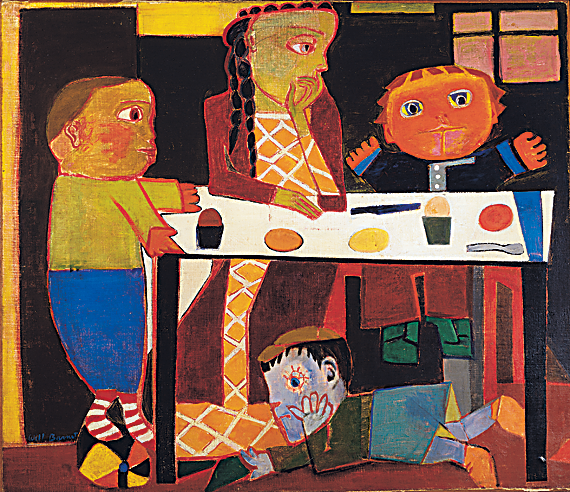 By 1946, when Barnet completed Soft Boiled Eggs, he had entered the realm of Modernism. In the painting, Barnet’s wife and three children surround a kitchen table. In sharp contrast to Idle Hands, all of the flatly rendered elements in the painting are brought to the foreground without any hint of depth or pictorial illusion. 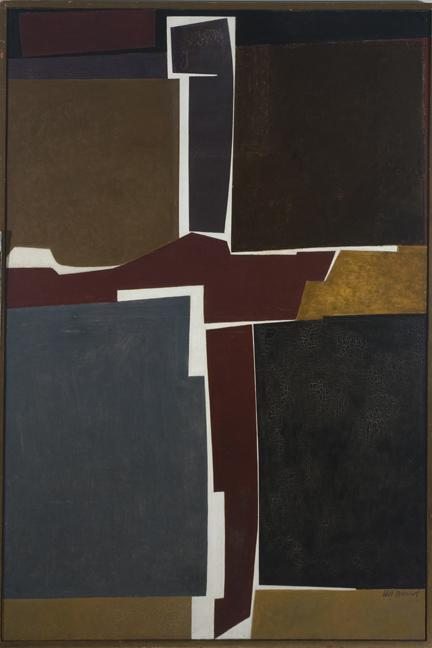 The 1959 Singular Image is a purely abstract work “prompted by a glimpse of his shadow as it intersected cracks in a city sidewalk,” as Weber notes in the exhibition catalogue, Will Barnet at 100. Barnet has explained that the cross-like form outlined in white and floating against a dark background expresses “the idea of modern man being … pushed in by all kinds of forces.” 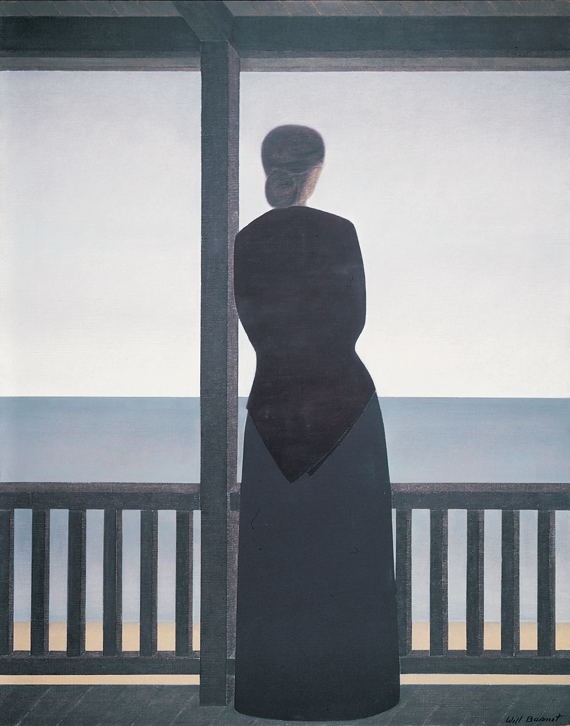 In the early ‘60s, Barnet returned to figuration in paintings of his family, friends, and associates. The 1972 painting, Woman and the Sea, was inspired by a moment when he saw the silhouetted figure of his second wife, Elena, leaning against a porch column in a summer house in Maine and looking out across the ocean. As Weber noted in his catalogue essay, “The picture alludes to New England days of the past and the countless women left behind by men who went to sea… For Barnet, the woman was a universal symbol of strength, home, and endurance in the face of life’s mysteries.” 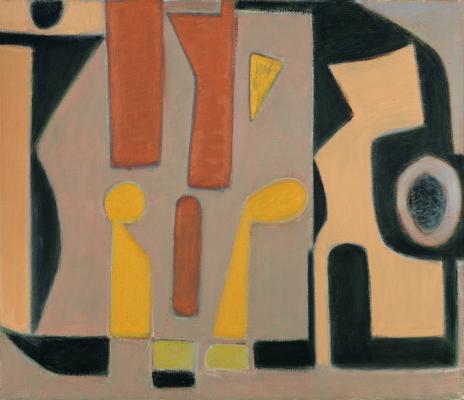 In 2003, Barnet returned to abstraction to explore form, space, and color anew. Strolling, from 2008, has a lighter palette and freer and more open sense of composition than many of his earlier abstract works.

Founded in 1825, the National Academy Museum and School is the only institution of its kind that integrates a museum, art school, and honorary association of artists and architects dedicated to creating and preserving a living history of American art. The Academy promotes American art and architecture through exhibition and education and continues to play a critical role in fostering the visual arts in America.

Posted by Jonathan Kantrowitz at 10:16 AM