During the turbulent 1940s, artist George Ault (1891-1948) created eerie and evocative paintings that are some of the most original made during those years. To Make a World: George Ault and 1940s America, organized by the Smithsonian American Art Museum in Washington, D.C., was on view at The Nelson-Atkins Museum of Art Oct. 15 through Jan. 8, 2012.

The first major exhibition of Ault’s art in more than 20 years, To Make a World recreates a moment in America when the country was rendered fragile by the Great Depression and made anxious by global conflict. Although much has been written about the glorious triumph of the World War II, what has dimmed over time are memories of the tenor of life on the home front, when the country was distant from battlefields yet profoundly at risk.
The art Ault created while living in relative isolation in rural upstate New York became a personal world of clarity and composure that offset a real world he felt was in crisis.

"George Ault’s world is very different from the world of the can-do spirit embodied by Rosie the Riveter," said Stephanie Knappe, assistant curator of American art at The Nelson-Atkins Museum of Art. "He felt the world was disintegrating before his eyes and tried to control the chaos around him through his art."
This exhibition of 48 paintings, drawings and prints presents Ault in context with 22 of his contemporaries. Although many of these artists, like Ault, worked far from the wartime turmoil felt in large cities, they nevertheless confronted the devastating uncertainty of the times. Paintings by celebrated artists Edward Hopper and Andrew Wyeth as well as by those less widely known today, such as Edward Biberman and Dede Plummer, present an aesthetic vein running through 1940s American art not previously explored and reveal affinities with and contrasts to the world Ault so carefully made in his studio. 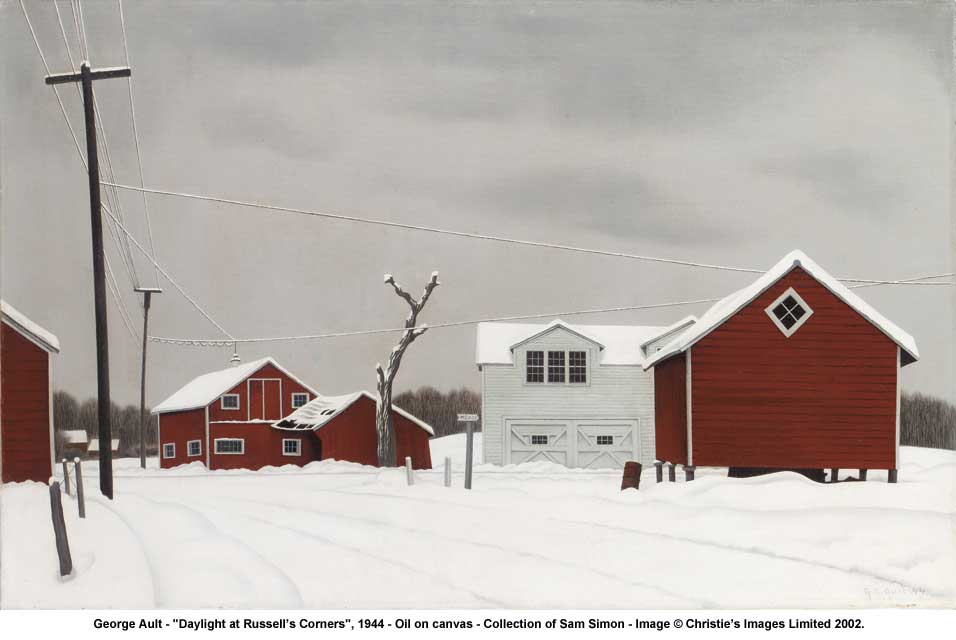 Central to the exhibition are four paintings Ault made between 1943 and 1948 depicting the crossroads of Russell’s Corners in Woodstock, New York, not far from Ault’s home.

The mystery in Ault’s Russell’s Corners pictures and other paintings in this exhibition, such as the Nelson-Atkins’ own haunting January Full Moon, evoke the mood of life on the home front, while the meticulous control with which they were rendered offers a counterbalance to civilization at the brink during the war years.

"Beyond shedding light on forgotten memories and rekindling lost emotions, To Make a World resonates strongly today as we all strive to make our own worlds while so much around us is constantly changing," said Knappe.

To Make a World revisits 1940s America, drawing in visitors in through the least likely of places—not grand actions or cataclysmic events, not epoch-making posters and headlines, but quiet spots where some mystery seems always on the verge of being disclosed.

Alexander Nemerov, the Vincent Scully Professor of the History of Art at Yale University, was the guest curator of the exhibition.

"These drawings and watercolors not only reveal a range of styles and subject matter, but also shed light on the Ault’s working methods. Together, these sheets offer an intriguing retrospective of Ault’s poetic vision and independent spirit," says Knappe.

New Jersey photographer and collector Donald Lokuta, donor of the generous gift from which this installation is drawn, recognizes the revelatory quality of Ault’s art on paper:"I have always believed that you can understand George Ault the man and the artist more completely by looking at his works on paper," said Lokuta. "The drawings show a curious mind; a person who was searching and always willing to try something new."
Posted by Jonathan Kantrowitz at 7:38 AM