"Grant Wood's Studio: Birthplace of 'American Gothic'" appeared at the Smithsonian American Art Museum's Renwick Gallery, March 10, 2006 - July 16, 2006. This was the only presentation besides the Cedar Rapids Museum of Art. Jane Milosch, curator at the Renwick Gallery, was the curator of the exhibition.

The exhibition coincided with the renovation of the artist's historic studio in Cedar Rapids, Iowa, known as "5 Turner Alley," where he lived and worked from 1924 to 1935. Wood converted the loft of this turn-of-the-century carriage house into a showcase for his decorative arts work and a backdrop for some of his most famous paintings. The exhibition featured works from the collection of the Cedar Rapids Museum of Art, studio artifacts and heirlooms that served as props, as well as significant loans from other museums and private collections that rarely travel. Together these works helped to re-create Wood's studio and demonstrated the importance of craft in the development of the artist's work.

This exhibition of approximately 160 works by artist Grant Wood (1891-1942) placed his decorative arts and design work within the larger context of his better-known paintings, drawings, and prints.

and Daughters of Revolution.

Works by Grant Wood from The National Gallery of Art:

Born in Anamosa, Iowa, in 1892, Grant Wood spent his career painting the landscapes and people of the American Midwest. Wood studied at the Art Institute in 1912 and made several trips to Europe in the 1920s. He went to Munich in 1928 to supervise the manufacture of a stained-glass window he had designed. Inspired by early Flemish paintings in museums he visited, Wood developed and refined his style, characterized by carefully drawn details and clear, strong lines. He was a member of a group of artists known as regionalists, who were part of the American Scene movement of the 1930s. Wood and other artists such as John Steuart Curry and Thomas Hart Benton rejected the modern movements of their European colleagues, and instead looked nostalgically to America's past and rural life for inspiration. Their works reflect the strong nationalist spirit of this period in American history. The interest in specific regions of the country also found expression in the fiction of William Faulkner and John Steinbeck, as well as government programs that encouraged local arts and crafts traditions.

Wood not only depicted the farms of his Iowa childhood in his work, but he also painted the farmers, celebrating their enduring, virtuous, and heroic spirit. He could also view them with wit, as in his most famous painting, American Gothic. That portrayal of a farmer and his wife won him national recognition and a bronze medal in 1930 from the Art Institute of Chicago, where it now hangs. The artist died in Iowa City in 1942. 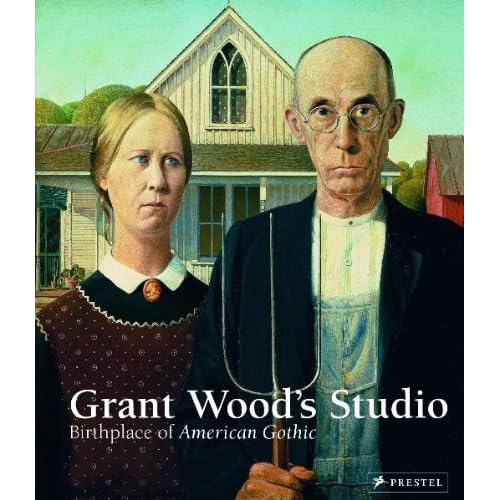 Posted by Jonathan Kantrowitz at 5:36 AM