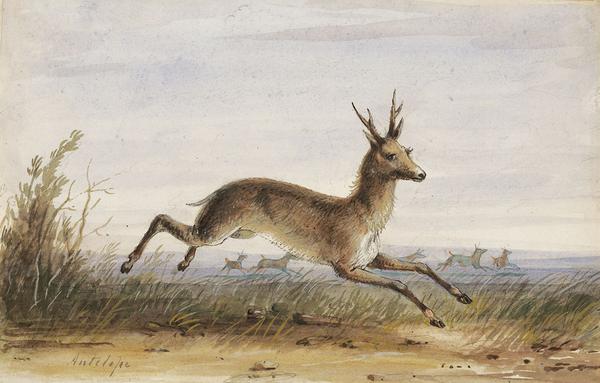 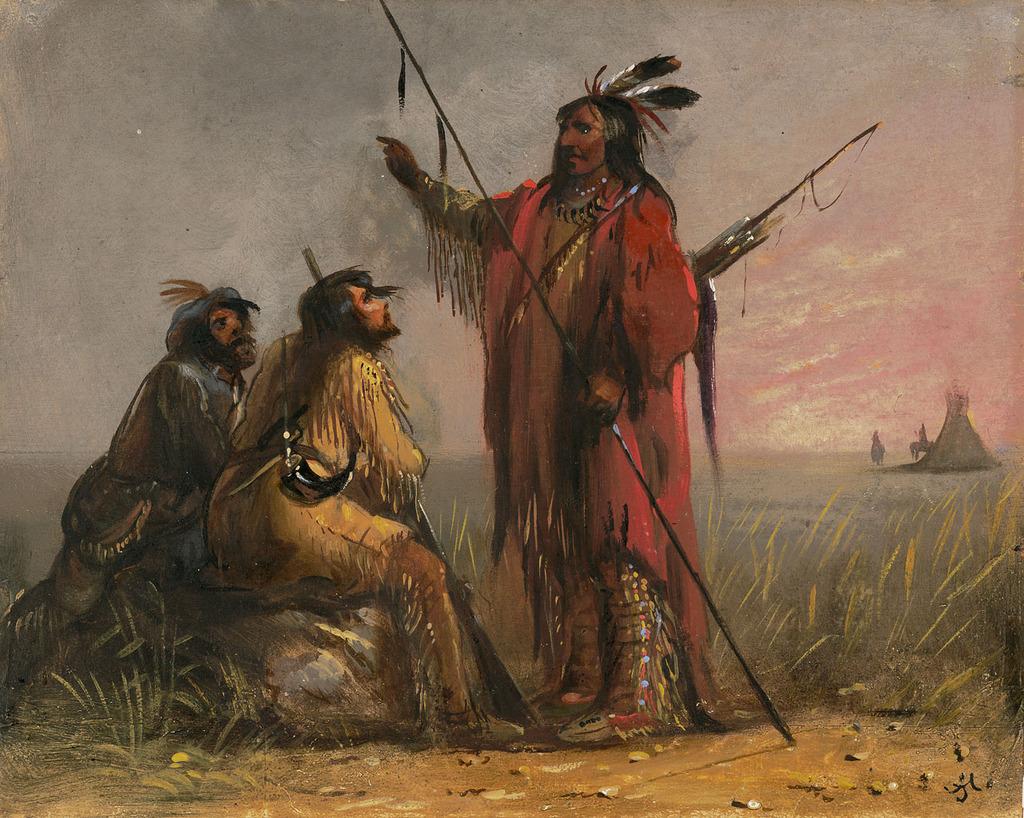 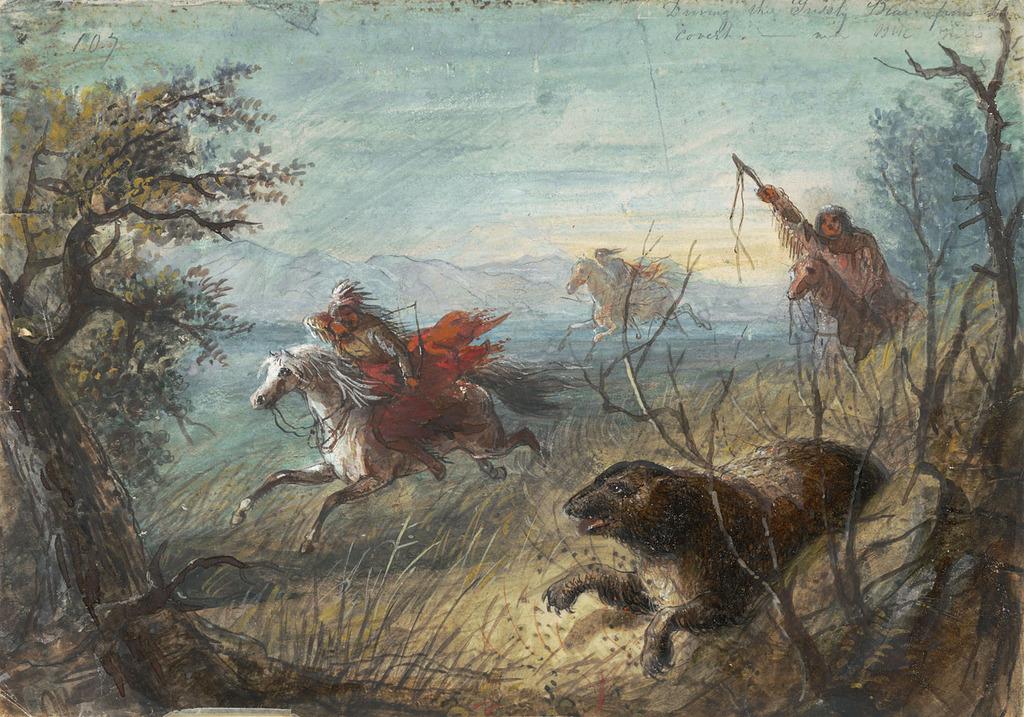 The American West was a source of great fascination for Easterners and visitors to this country alike during the 19th century. Novelists such as James Fenimore Cooper and Charles Bird King capitalized on this fascination with books such as King’s Young Omaha, War Eagle, Little Missouri, and Pawnees, featuring descriptions of wild mountain men and Native Americans that incited the public’s imagination about life on the frontier.

Alfred Jacob Miller (1810–1874) was one of the first American artists to paint the American West, producing beautiful watercolors of the remarkable landscape, exotic wildlife, and Native American peoples that he encountered during the trips he made through the Great Plains and into the Rocky Mountains during the late 1830s.

Romancing the West: Alfred Jacob Miller in the Bank of America Collection, at the Philadelphia Museum of Art, through Sept. 18, 2011, presented a selection of 30 rarely seen watercolors from Miller’s most important body of work: the images he created in 1837 when traveling with the Scottish adventurer Captain William Drummond Stewart west from St. Louis to Wyoming’s Wind River Mountains, along what would become known as the Oregon Trail.

“As a greenhorn from the East, Miller captured life in the West with wide-eyed admiration, depicting the landscape in a captivating way,” said Kathleen A. Foster, the Robert L. McNeil, Jr. Senior Curator of American Art, and Director, Center for American Art. “He was also a vivacious and accomplished draftsman, and gave us a picture of roundups, fur trappers and hunting expeditions that blended visual journalism with the fanciful and made an important contribution to what would become a shared mythology of the West.”

Commissioned by Captain Stewart to document scenes from their travels to the annual fur-trading rendezvous in Wyoming’s Wind River Mountains, Miller spent six months creating hundreds of sketches that would serve as a mine of inspiration for the next three decades. The watercolors in Romancing the West are drawn from a group of more than 1,000 works created during and after his trip. Many feature horsemen riding at breakneck speeds, hunting expeditions, colorfully-dressed fur traders, beautiful Native American women, and all of the thrills of the trail.

Driven by his patron’s agenda, the works Miller created for Stewart depict a heroic and romantic way of life, frequently starring Miller’s enterprising patron as the protagonist. Stewart leads the hunt in Elk Taking the Water, while Chase of the Grizzly Bear, Black Hills suggests the Scotsman’s prowess and bravery in pursuit of the fierce grizzly. Large-game hunting was among Stewart’s favorite leisure activities, and the theme appears in more than one-quarter of the images Miller created for him. When they returned from the trip, Stewart commissioned several large paintings in oil and watercolor from Miller’s original sketches, which were bound into an album he kept back in his castle in Perthshire, Scotland, to illustrate his dramatic tales of his American adventures.

Of different sizes and on different papers, the watercolors in the exhibition suggest works done over time and in different locations. Historical details depicted in works like Departure of the Caravan at Sunrise provide a first-hand record of the contrasts seen between white and Native American travelers and provide important cultural and historical evidence of everyday life on the frontier during the 1830s. Others are based on accounts from other travelers or are drawn from Miller’s imagination, depicting views from vantage points that Miller would never have seen, including Watching the Caravan, depicting two Native Americans peering over the edge of a cliff at a wagon train below. He also embellished certain details, giving fur trappers an air of mystique by replacing ordinary trousers and jackets with elaborate, fringed buckskin ensembles (Old Bill Burrows, a Free Trapper). These romanticized characters and invented landscapes captivated viewers back East and in Europe, many of whom fantasized about the picaresque life of the fur trappers of the Wild West.

Miller’s formal art training, first with Thomas Sully in Baltimore, and later at the École de Beaux-Arts in Paris, presented an opportunity for him to study the Old Masters and to become known as a skilled copyist. He particularly admired the work of Eugène Delacroix and of French Romantic painter Horace Vernet, whose images of horses offered a possible model for On the Warpath – Running Fight, and War Path, both part of the Bank of America collection. Snake Female Reposing, a sensual portrayal of a young woman from the Snake tribe reposing under a tree, references the paintings of Middle Eastern odalisques Miller would have seen in the galleries of the Louvre while training abroad in 1833-34.

As a result, the works in Romancing the West mix fact with fantasy, reflecting frontier life both as it was, and as it was imagined to be. The exhibition offers a glimpse of a thrillingly unknown, frequently mythologized region of the country that was intoxicating to its mid-19th-century Eastern and European viewers.