Monet, Renoir - Argenteuil and its Historic Role in the Development of Impressionism

Bringing together more than fifty paintings, including many rarely seen outside private collections, The Impressionists at Argenteuil was the first exhibition to examine the seminal role of the small suburban town of Argenteuil in the development of the impressionist movement. The exhibition was organized by the National Gallery of Art, Washington, where it was on view 20 May - 20 August 2000, and the Wadsworth Atheneum Museum of Art, Hartford, where it was shown 9 September - 3 December 2000. With special emphasis on canvases by Claude Monet, who as an Argenteuil resident became the focus of the group, the presentation includes colorful, evocative works by his avant-garde colleagues, Eugène Boudin, Gustave Caillebotte, Èdouard Manet, Auguste Renoir, and Alfred Sisley. In the 1870s, these six influential artists worked in the open air, often side by side, recording scenes in and around Argenteuil. Their innovative paintings made Argenteuil synonymous with the style that became known as impressionism, characterized by broken brushwork and divided light and color.

Monet first settled in Argenteuil, a fifteen-minute train ride from the Gare Saint-Lazare in the heart of Paris, in 1871. During his six years there, his impressionist colleagues came to visit, commune, and paint alongside him. Their broken brushwork, heightened color, irregular surfaces, and a sense of fleeting effects gave physical expression to Argenteuil's towpaths and railway bridges, gardens and factories, sailboats and regattas, and each other and their families. Frustrated by the traditional system of judging and exhibiting works of art in the official Salons each year, the avant-garde artists placed shared goals ahead of individual differences, meeting at Monet's house to lay plans for the independent group show that introduced impressionism in 1874. Examples of their finest canvases highlight the present exhibition.

Monet was not only the central figure in the movement but also the most prolific painter in Argenteuil, completing more than sixty canvases in 1872 alone. Time and again during these pivotal years Monet stood beside one of his artist friends rendering the same scene, such as the Boulevard Héloise with Sisley or a regatta with Renoir. Among the most celebrated pairs in the exhibition, two versions of

Renoir
Sailboats at Argenteuil were painted by Monet and Renoir, each from the same vantage point in 1874, but differing in details that reflect the individual artist's personality and ideas.

Another shared theme is the clump of trees that appears both in Boudin's riverfront view, The Seine at Argenteuil (c. 1866), and at the end of the towpath in Monet's painting from upriver, The Promenade at Argenteuil (c. 1872).

Other highlights include Caillebotte's imaginative rendering of Richard Gallo and His Dog Dick at Petit Gennevilliers (1884) and his characteristically forthright image of a distillery, Factories at Argenteuil (1888). Equally meticulous depictions by Caillebotte and 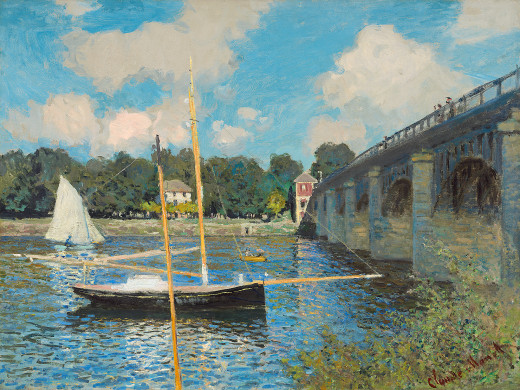 Monet of the highway bridge that crosses the Seine into Argenteuil are also on view. 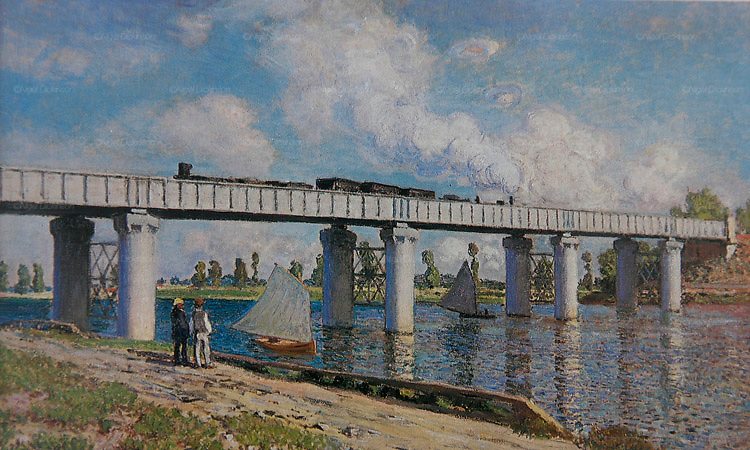 Monet's two sunlit views of The Railroad Bridge at Argenteuil (both 1874), a structure that was expeditiously rebuilt after being destroyed in the Franco-Prussian War, contrast with several lush canvases in which he documented his house, garden, and family in the small town.

Particularly memorable is his celebrated Woman with a Parasol–Madame Monet and Her Son (1875), from the National Gallery of Art's collection. Several paintings by Renoir of Monet and his family are among the notable portraits. Manet's view of Monet in his studio boat is an aquatic version of

Renoir's portrait of Monet painting in his garden. 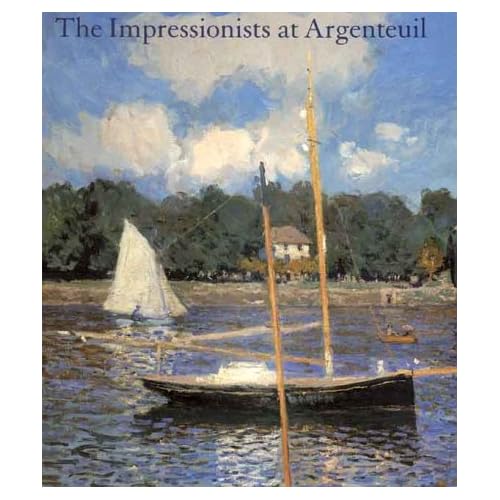 A fully illustrated catalogue was written by Tucker.

Posted by Jonathan Kantrowitz at 7:51 AM