Ernst Ludwig Kirchner, 1880-1938, the first major international exhibition of paintings, prints, drawings, and sculptures by the innovative German artist to be seen in the United States in over 30 years, premiered at the National Gallery of Art, East Building, March 2 through June 1, 2003. It contained both well-known masterpieces and outstanding works that have never been lent or shown publicly before.

Kirchner was a forceful advocate for artistic change, and his uninhibited work occupies a key position in early 20th-century art. The Washington exhibition of 140 works surveys his career but focuses primarily on work created from 1908 to 1920, during his prewar years in Dresden and Berlin and his early years in Davos, Switzerland.

Ernst Ludwig Kirchner, 1880-1938, was organized by the National Gallery of Art, Washington, and the Royal Academy of Arts, London. Following the Washington showing, a different version of the exhibition was on view in London, June 28 through September 21, 2003.

Influenced by the art of Rembrandt, Van Gogh, and Gauguin, as well as deeply interested in the art of Africa, Oceania, and India, Kirchner created brilliantly colored, intense scenes of modern life. Kircher’s art includes a wide range of works, at times intimate and gently delightful, at others humorous, sensuous, psychologically disturbing, or grandly romantic. He was a master of every major medium—painting, drawing, sculpture and printmaking. A prolific artist, he created more than 1,200 paintings, 2,000 prints, and 20,000 drawings. This exhibition was a tightly focused review of 140 of his finest works.

To demonstrate the artist’s creative process and the dialogue among his various media, paintings, watercolors, drawings, prints, and sculpture are shown together throughout the exhibition, following his life’s chronology. Kirchner’s productive Dresden years were represented in the exhibition by works such as the exuberant lithographs 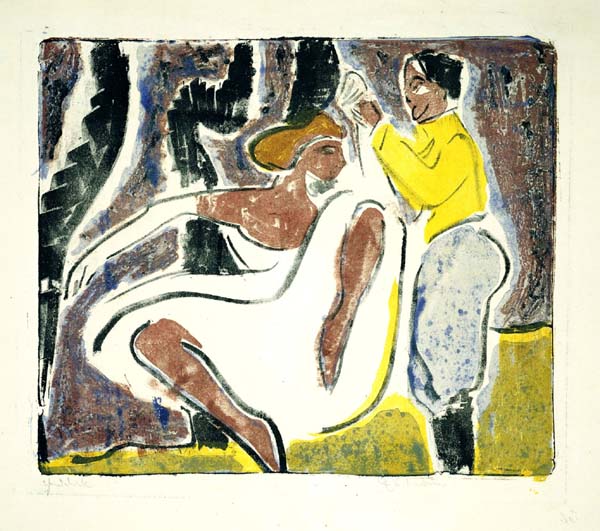 the intensely ambivalent painting Fränzi before a Carved Stool (1910),

and the brilliantly colored Milli Seated in the Studio (1911).

In Berlin, a city undergoing rapid growth, Kirchner experienced the crowds and excitement of big city life, and his work became sharper and more complex. His portrayal of Berlin street scenes captures the edgy essence of the city and is represented in the exhibition by an entire section containing many of his finest works from 1913-1914,

including his variations on the painting and pastel Friedrichstrasse (1914),

the color lithograph Promenade in Front of the Café (1914), and his masterwork painting and woodcuts entitled Potsdamer Platz (1914).

In addition to his acute observations of city life, Kirchner created many works set in nature. The exhibition includes examples of Kirchner’s landscapes and studies of the nude in nature, including such paintings as the sun-filled Four Bathers (1910),

and the iridescent Winter Landscape by Moonlight (1919).

Born in 1880, Kirchner studied architecture and painting before forming the artists’ group Die Brücke ("The Bridge") in Dresden on June 7, 1905, with Fritz Bleyl, Erich Heckel, and Karl Schmidt-Rottluff. Kirchner and other Brücke members moved to Berlin in 1911, but within two years the group split.

Kirchner continued to work at a feverish pace, producing art that drew its subject matter from the bohemian life of the city and summer trips to the Baltic Sea. His works were exhibited and collected from 1907, and by the mid-teens Kirchner had a number of devoted collectors, both private and institutional.

At the outbreak of World War I, Kirchner joined the German army, but eventually suffered a nervous breakdown and moved to a sanatorium. Despite ill health and struggles with drugs, he produced many important paintings and major portrait woodcuts. In 1917 he moved to Davos, Switzerland, to recover and embarked upon paintings, drawings, and prints of the surrounding Alps. Through the 1920s major exhibitions of his work were held in Berlin, Frankfurt, Dresden, and other cities. In 1931 he was made a member of the Prussian Academy.

Labeled a degenerate artist by the Nazis, Kirchner was asked to resign from the Berlin Academy of Arts in 1933. In 1937, more than 600 of his works were confiscated from German museums and were either destroyed or sold, many ending up in America. In 1938 the psychological suffering caused by the Nazi authorities rejecting him as "un-German," the dispersal and destruction of his works, and the Nazi occupation of Austria so close to his home in Davos led to Kirchner’s suicide.

The curator for the Washington installation of Ernst Ludwig Kirchner, 1880-1938, was Andrew Robison, Mellon Senior Curator at the National Gallery of Art. For the London installation the curators were: Jill Lloyd, independent curator; Magdalena Moeller, director of the Brücke-Museum, Berlin; and Norman Rosenthal, exhibition secretary of the Royal Academy.

The exhibition catalogue Ernst Ludwig Kirchner, 1880-1938 presented new research by Kirchner scholars and is the first comprehensive publication on Kirchner in English in 30 years. It was edited by Jill Lloyd and Magdalena Moeller, with essays by them, as well as by Wolfgang Henze, Andrew Robison, Norman Rosenthal, and Roland Scotti on aspects of the artist’s work, from its German context to its reception in America and Britain.

Posted by Jonathan Kantrowitz at 9:05 AM