John Marin (1870–1953) Movement in Red, 1946. Oil on canvas. John Marin © Estate of John Marin / Artists Rights Society (ARS), New York. Collection of Deborah and Ed Shein.
(Courtesy of Amon Carter Museum of American Art)
The Amon Carter Museum of American Art presented the work of one of America’s foremost modernists, John Marin (1870–1953), in the special exhibition John Marin: Modernism at Midcentury. On view from November 5, 2011, through January 8, 2012, the exhibition covered the last 20 years of Marin’s career, from 1933 until his death in 1953. With more than 60 paintings, this is the first in-depth examination of Marin’s work in over 20 years. Admission is free.

Among the most widely acclaimed artists of the early 20th century, Marin was consistently praised by critics for his distinctive approach to modernism, the bold originality and the authentic “Americaness” of his work. Writing in 1932, The New Yorker literary critic Lewis Mumford considered Marin “the most significant and poignant and accomplished landscape painter of his generation in America.” Roughly 20 years later, at the time of Marin’s memorial exhibition held in New York in 1954, the critic Robert Rosenblum astutely noted, “He stands in full center of the major currents of American Art … he parallels, even prophesies, abstract-expressionist trends.”

John Marin: Modernism at Midcentury examined the artist’s modernist vision as it developed during the last decades of his life. For Marin, the 20-year span between 1933 and 1953, a period bracketed by the Great Depression and the decade following World War II, was a time to position his legacy within the grand narrative of art and to reaffirm the validity of American avant-garde, the ambitious, home-grown experiment upon which he had staked his more than 50-year career. 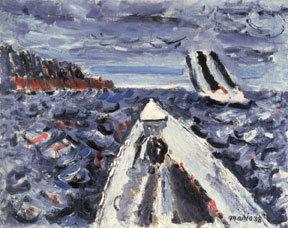 Although John Marin (1870-1953) was regarded as one of America’s most important painters at the time of his death, scholarship and museum exhibitions to date have focused on his early work coloring popular understanding of his life’s work. Featuring approximately 60 paintings, drawings, and watercolors, John Marin: Modernism at Midcentury, was on view June 23 through October 10, 2011 at the Portland Museum of Art. 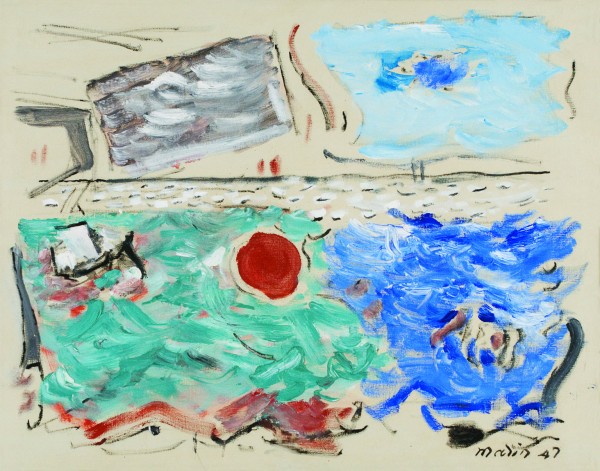 John Marin (1870–1953) Movement: Sea, Ultramarine and Green; Sky, Cerulean and Grey, 1947 Oil on canvas © Estate of John Marin / Artists Rights Society (ARS), New York Blanton Museum of Art, The University of Texas at Austin, Gift of Mari and James A. Michener, 1991.262
Based in New York and New Jersey, Marin followed a path time-honored by artists to coastal Maine. Unlike an earlier generation, however, Marin brought his modernist eye to Maine’s venerable landscape. He initially painted near mid-coast Small Point in 1914, but in 1933 began summering in remote Cape Split. This move farther north heightened the painter’s commitment to a raw, unspoiled landscape. Marin sensed the radical potential for his painting on Cape Split; the possibility to transform the ephemeral patterns of waves into innovative compositions would forecast some of the primary features and preoccupations of mid-century American art. By the time he took up residence along the coast of Maine, Marin had begun to work in oil on canvas alongside his staple of watercolor. The medium of oil, with its innate fluidity and viscous texture, suited capturing not only the impact of the wind, sun, and rain on the sea but the intense blue and green colors of its waters. His work in oil and watercolor came to inform each other as the saturation of the former and immediacy of the latter were placed in service of more compact and non-referential compositions.

While the sea became a focus of Marin’s work after 1933, he would never forgo the New York skyline, or the Ramapo hills and Saddle River of New Jersey. He continued to mine these sites for their vitality, but they became progressively non-representational, employing geometric patterns, and culminating in the 1950s in calligraphic, lace-like statements. Many of Marin’s oil paintings during this period were accompanied by stock frames which he painted with loose, geometric shapes as an extension of the canvas.

Beginning in 1914, Marin began spending summers in Maine and drew inspiration from the state’s varied geography—forested mountains, picturesque towns, misty harbors and rolling seas. In 1933, he discovered Cape Split, a remote and sparsely settled northern peninsula in Pleasant Bay; and in 1934, he began living part of each year there in a house “so close to the water I almost feel at times that I am on a boat,” he said. This new location proved hugely liberating and revelatory for the artist. Immersed within “the spirit of the Cape,” even in winter while residing at his home in Cliffside, New Jersey, Marin confronted the forces of nature as never before.

“Marin’s talent, prodigious memory and his unfettered enthusiasm for both Cape Split and the landscape near his New Jersey home inspired him to produce an innovative synthesis of watercolor and oil painting,” says Balken. “Working vigorously, he explored the symbiotic relationship between the two mediums, learning to accentuate the tactile possibilities of each and to translate the fluidity and directness of watercolor to the medium of oil and, conversely, the depth and solidarity of oil to the medium of watercolor without sacrificing its appealing luminosity.”

John Marin: Modernism at Midcentury was co-organized by the Addison Gallery of American Art, Phillips Academy, Andover, Massachusetts, and the Portland Museum of Art, Portland, Maine, and brought together important loans from the National Gallery of Art, Washington, D.C., and Museum of Fine Arts, Boston, as well as from many other institutions and private collections. 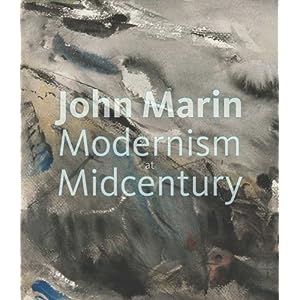 The accompanying catalogue, written by Balken and produced by Yale University Press, provides insight into Marin’s work from this period within the context of contemporary critical discourse.

Posted by Jonathan Kantrowitz at 5:21 PM