Masters of Venice: Renaissance Painters of Passion and Power From the Kunsthistorisches Museum, Vienna

The de Young Museum in San Francisco presented a global exclusive exhibition, Masters of Venice: Renaissance Painters of Passion and Power From the Kunsthistorisches Museum, Vienna, which opened on October 29, 2011 and ran through February 12, 2012. The exhibition featured 50 magnificent paintings by artists such as Titian, Giorgione, Veronese, Mantegna, and Tintoretto, representing the height of Venetian Renassaince painting. Loaned by the Gemäldegalerie (Picture Gallery) of the Kunsthistorisches Museum in Vienna, these works are among the museum’s most celebrated holdings from art collections built over centuries by the emperors and archdukes of the royal house of Habsburg.

“When the Fine Arts Museums learned that the collection of Venetian paintings would be deinstalled temporarily to make way for a special exhibition, we moved rapidly to seize this once-in-a-lifetime opportunity to introduce such exquisite and canonical artwork to American audiences. Many of these paintings have been unseen on these shores until now,” explains John E. Buchanan, Jr., director of museums for the Fine Arts Museums of San Francisco.

Masters of Venice is the first exhibition of Italian art at FAMSF since the presentation of Treasures from the Basilica of Saint Francis of Assisi in 1999–2000. The Museums’ history of showcasing masterworks from the Italian Renaissance dates back to 1938, when the Legion of Honor presented Venetian Paintings from the 15th Century Through the 18th Century, America’s first major exhibition of Venetian Renaissance paintings.

One of the singular movements in the evolution of Western Art, the Venetian Renaissance forged an artistic vocabulary that took full advantage of the poetic potential of rich atmospheric effects, lustrous color and the sensuous beauty observed in nature. Venetian painters of the cinquecento transcended the spatial, textural and respresentational realism of their predecessors to create works unsurpassed in their emotional and sensual depictions, velvety surfaces and glorious treatment of light.

Artists in this exhibition such as Giorgione, Titian, Veronese and Tintoretto were legends in their own time and their paintings were highly prized by discerning collectors across Europe. Works by painters such as Palma Vecchio, Bordone and Bassano demonstrate the full range of Venetian accomplishment in the Renaissance era.

Among the highlights of the exhibition were:


- More than a dozen works by Tiziano Vecellio, know as Titian, once Giorgione’s assistant, whose talent soon rivaled his master’s. His work is synonymous with the Venetian style — lustrous pigments, sharply graduated light and shadows delineating robust forms 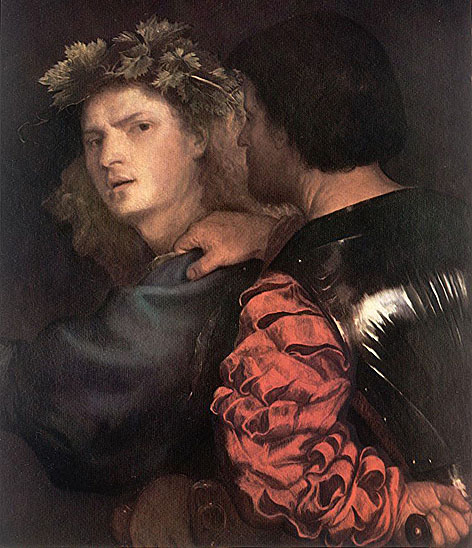 - Saint Sebastian (ca.1457–1459) by Andrea Mantegna, represents early Renaissance painting and is the first of three paintings on this subject by the artist. In this work Mantegna incorporates details of ancient sculpture and architecture which organizes the pictorial space through linear perspective.

- Four rare works by the enigmatic painter Giorgio da Castelfranco, known as Giorgione. The Three Philosophers (ca. 1477–1510), one of the most celebrated works of the 16th century, uses an innovative integration of the figures within the spatial continuum of nature which marks a dramatic advance in the evolution of Western representation imagery. 
- The tapestry-like, shimmering and sensuously colored works by Paolo Caliari, known as Veronese

including the grand scaled Anointing of David (ca. 1555), and the dishonored heroine Lucretia (1528–1588), whose creamy skin and sumptuous fabrics divert the viewer’s eye from her suicide blade.

The Gemädegalerie (Picture Gallery) of the Kunsthistorisches Museum in Vienna holds one of the world’s most distinguished collections of Old Master paintings. Collected by the emperors and archdukes of the royal house of Habsburg, this collection is one of the world’s four princely collections that rival those in Paris (the Louvre), Saint Petersburg (the Hermitage) and Madrid (the Prado). The Kunsthistorisches Museum was conceived by Emperor Franz Joseph I to house the impressive art accumulated over the many centuries of Habsburg rule and opened on October 17, 1891. Its collections include paintings, decorative arts, armor, Greco-Roman and Egyptian antiquities, coins and musical instruments. Located on Vienna’s grand boulevard the Ringstrasse, near the Museum of Natural History, City Hall, Parliament, the former Imperial Theater and the Opera House, the Kunsthistoriches Museum’s architecture and interior decoration are as magnificent as its collections.

Posted by Jonathan Kantrowitz at 10:23 AM