Virtue and Beauty: Leonardo's "Ginevra de' Benci" and Renaissance Portraits of Women, the first exhibition on the subject ever organized, surveyed the phenomenal rise of female portraiture in Florence from c. 1440 to c. 1540. On view in the West Building of the National Gallery of Art from 30 September 2001 through 6 January 2002, the exhibition comprises 47 works, some never before seen in this country, including panel paintings, marble sculptures, medals, and drawings. The works presented were not only rare and beautiful but also offered the opportunity to examine the social role of women during the Renaissance and the evolution of their portraiture.

Renaissance panel portraits, depicting women independent from their husbands, were almost exclusively produced in Florence. This exhibition brought together all of the most significant examples of the genre, with the exception of a few panel paintings that could not safely travel. The works were presented in loose chronological order and in subgroups by medium.

In addition to panel portraits, there were a smaller number of medals, drawings, and marble busts. Florentine artists that are represented include Filippo Lippi, Botticelli, Verrocchio, Leonardo, Domenico Ghirlandaio, and Bronzino. Works on display by masters such as Pisanello, Rogier van der Weyden, and Jacometto Veneziano provide further insight into the development of female portraiture outside Florence.

Two major themes were highlighted in this exhibition--virtue and beauty as they relate to female portraiture, and the broad shift from the aloof painted profile to the more communicative three-quarter or frontal view.

Ruler Portraits: Independent portraits of women were rare prior to the mid-15th century. They often depicted a prospective partner for a royal or noble marriage. More common for the time were ruler portraits depicting both husband and wife. These portraits were likely executed in the traditional profile view because of its association with ancient coins and medallions. Examples of this portrait type can be seen in the beginning of this exhibition.
Early Florentine Profiles: As the 15th century progressed, portraits of females, independent of men, increased in popularity. Filippo Lippi created portraits of women that were the first of their kind in Renaissance Florence. The exhibition features his two surviving masterpieces of the genre, 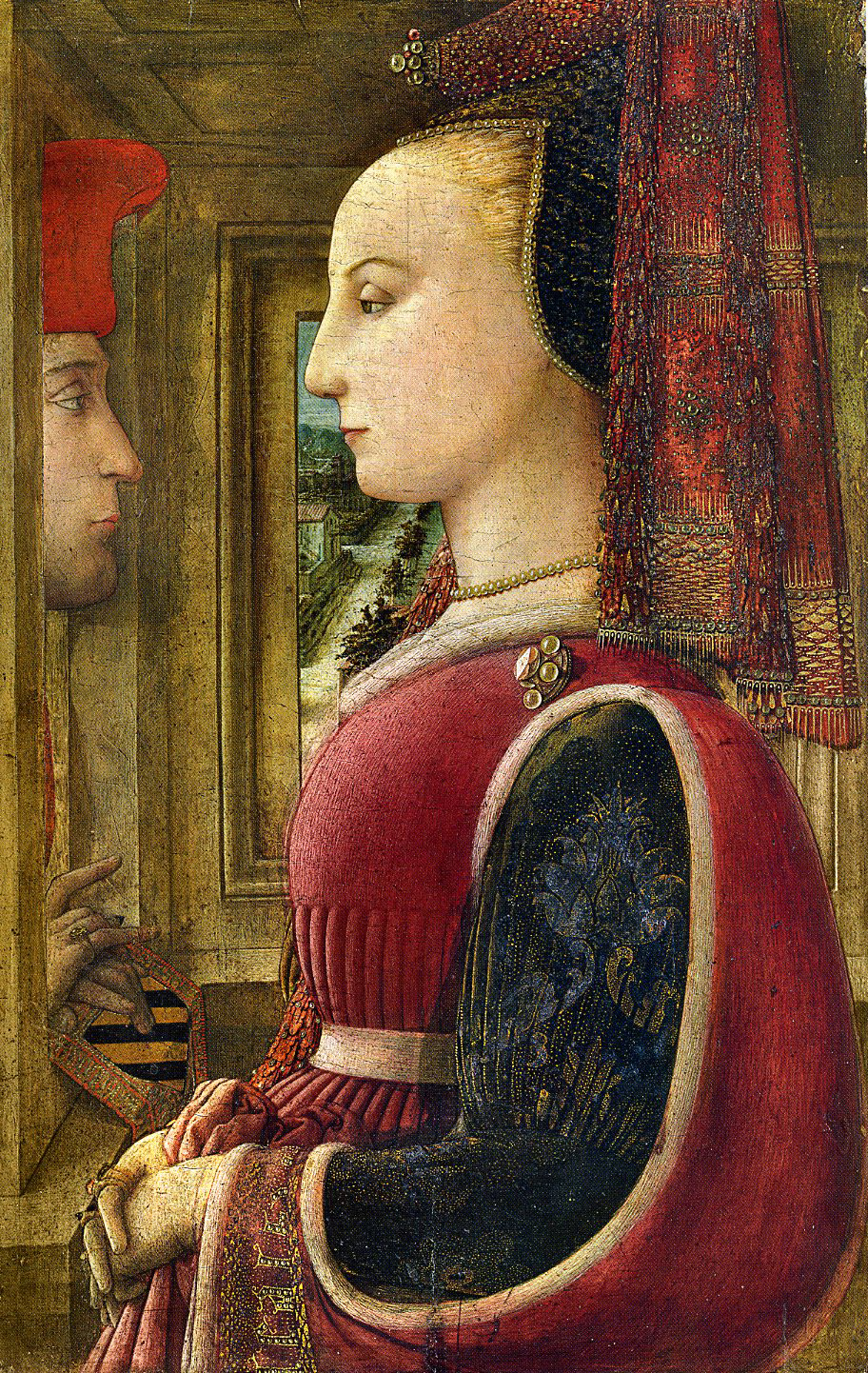 Profile Portrait of a Young Woman (c. 1450-1455). Both works depict the sitter facing left, establishing the standard profile type for portraying Florentine women. An additional early Florentine profile in the exhibition, A Young Lady of Fashion (c. 1460/1465), is attributed to Paolo Uccello and exemplifies the mid-15th century treatment of female portraits in which the sitter's individuality is suppressed in favor of the social ideals for which she stands.

Medals: Portrait medals, reflecting the ancient tradition of commemorative medallions and coins, flourished in the courts of northern Italy. Representations of female sitters, mostly the daughters and wives of rulers, were common. Pisanello (Antonio Pisano), whose medal Cecilia Gonzaga (1447) can be seen in the exhibition, is credited with inventing this art form. The practice of medals reached Florence in the 1470s. One of the most graceful of all the Florentine medals created is on view, Giovanna degli Albizzi Tornabuoni (c. 1486), attributed to Niccolò Fiorentino. It can be compared to Domenico Ghirlandaio's portrait of the same sitter, also in the exhibition.
Leonardo: This exhibition includes the only portrait by Leonardo da Vinci in the Western Hemisphere,

Ginevra de' Benci (c. 1474-1478). The front side depicts a simply dressed woman in a landscape, while the reverse depicts a wreath of laurel and palm encircling a sprig of juniper. A scroll, entwined around the plants, bears the Latin inscription "Beauty Adorns Virtue," exemplifying a major theme of the exhibition. Ginevra's portrait was shortened and may have originally included her hands.

Leonardo's Study of Hands (c. 1474), on view, was used to reconstruct the possible original format of the painting.

Breaking with the Florentine tradition of the bust-length profile, Leonardo was influenced by Verrocchio's Lady with a Bunch of Flowers (c. 1475_1480), the first 15th century sculptural portrait to show the sitter in half-length with arms and hands. Verrocchio's bust is here reunited with Leonardo's portrait for the first time since they were created in Florence more than 500 years ago.
Northern Analogues: Several northern European works in this exhibition are included for comparison. An especially beautiful example is Rogier van der Weyden's

Portrait of a Lady (c. 1460) in which he abandons the traditional profile and depicts the sitter in three-quarter view. The artist also utilizes a half-length format, allowing him to include the sitter's hands in a pose which captures the dignity and modesty of the lady. 15th century portraiture in northern Europe and Italy.

Botticelli Group: The exhibition includes four works by Sandro Botticelli. The earliest, Woman at a Window (Smeralda Brandini?) (c. 1470/1475), depicts the sitter in informal dress and hairstyle standing before a window. In an attempt to convey the physical and psychological presence of his sitter, Botticelli, like Leonardo, has departed from the more traditional profile in favor of the three-quarter view.

The Botticelli group also contains two striking male portraits, Giuliano de' Medici (c. 1478/1480) and Young Man Holding a Medallion (c. 1485), that are both related to the female portraits.
Ghirlandaio Group: Like Leonardo and Botticelli, Domenico Ghirlandaio was committed to the three-quarter view, which he used for the

Portrait of a Lady (c. 1480/1490), and the Portrait of a Young Man (c. 1490), part of a diptych portrait which also includes a female in profile.
Ghirlandaio, however, retained the traditional profile view for what is perhaps the most admired and discussed of all the Florentine portraits, his

Giovanna degli Albizzi Tornabuoni (c. 1488/1490). This portrait repeats the profile of the same sitter in a fresco scene painted by the artist in the Tornabuoni Chapel of the Church of Santa Maria Novella in Florence. Both likenesses are posthumous, representing the sitter after her tragic death in childbirth. This special circumstance may explain Ghirlandaio's departure from the three-quarter view.

Life Drawings: Renaissance portraits were not direct likenesses completed in the sitter's presence. They involved life studies that were made in preparation of the painted portrait. Recording the subject's physical features, such drawings were more likely to capture the sitter's actual likeness than the completed, idealized painted portrait. Life drawings in this exhibition include Pietro Perugino's Bust of a Young Woman (c. 1480/1490), Domenico Ghirlandaio's Head of a Woman (c. 1486/1490), and Raphael's Young Woman in Profile (c. 1504).

Early 16th Century: By the early 16th century the style for portraits of women had evolved. The Renaissance concept of virtuous beauty remained the same but the three-quarter view, established by Leonardo's Ginevra de' Benci (c. 1474-1478), and the frontal view, together with a larger format, now became the standard for female portaiture. Particularly imposing examples of this new type in the exhibition include Giuliano Bugiardini's Portrait of a Lady ("La Monaca") (c. 1516) with its painted cover, and Ridolfo Ghirlandaio's Lucrezia Sommaria (c. 1530-1532). Agnolo Bronzino's portraits, Portrait of a Lady (c. 1533) and A Young Woman and Her Little Boy (c. 1540), both reflect a new type of aristocratic portraiture emphasizing the dignified demeanor and elegant dress of the sitters that would be favored in courts throughout Europe.

Virtue and Beauty: Leonardo's "Ginevra de' Benci" and Renaissance Portraits of Women was organized by the National Gallery of Art, Washington. The exhibition curator is David Alan Brown, curator of Italian Renaissance paintings at the Gallery. 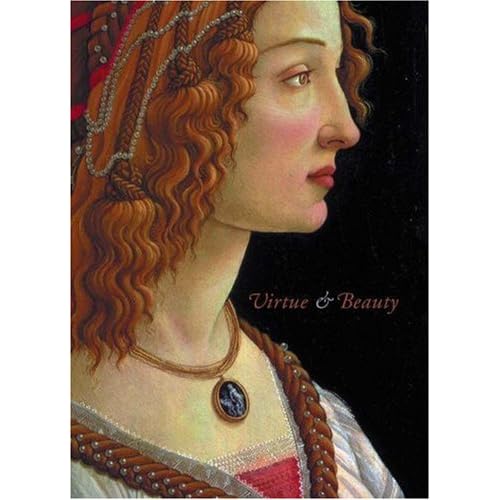 A beautifully illustrated exhibition catalogue, with an introduction by the curator and four informative essays by other experts on Renaissance art, was published by the National Gallery of Art, Washington, in association with Princeton University Press.


Posted by Jonathan Kantrowitz at 3:26 PM