One of the most acclaimed painters of his generation, George Tooker (1920-2011) possessed an originality and depth of vision that is unsurpassed in modern American art. For over sixty years, he has been highly regarded for his luminous and often enigmatic work. His themes range from alienation and the dehumanizing aspects of contemporary society to personal meditations on the human condition. By reducing action and anecdote to subtle gestures and juxtapositions that carry meaning and express essential truths, Tooker created modern allegories without traditional narrative content.

Tooker died at his home in Hartland, Vermont, on Sunday, March 27, 2011 at the age of ninety. The cause was kidney failure according to DC Moore Gallery, New York, which represents the artist.

A deeply spiritual and contemplative man, Tooker painted with a deliberative method partly dictated by his temperment and partly by his chosen medium. His beautifully haunting works are done in egg tempera, a traditional Renaissance medium that produces a rich, lustrous quality yet requires meticulous application. Over the course of his long career, he created fewer than 155 paintings.

Tooker first came to prominence for imaginative visions that expressed the uncertainty of the Cold War era. Among his best-known paintings is Subway (1950, Whitney Museum of American Art), a powerful work that explores the anxiety and isolation of nameless individuals in urban society. He was very involved with the Civil Rights Movement as well, in one instance marching in Selma, Alabama, with Dr. Martin Luther King in 1965, and frequently addressed issues of race and oppression in his work.

In addition to his engagement with social commentary, Tooker also created strikingly beautiful paintings of a more personal nature, many of which are concerned with states of consciousness, mysterious meditative realms between sleep and wakefulness. His good friend Lincoln Kirstein once characterized his work as Magic Realism, which has since been frequently used to describe his paintings. Tooker never cared much for that designation, however, because of the connotations of fantasy and Surrealism. “I am after painting reality impressed on the mind so hard that it returns as a dream, but I am not after painting dreams as such, or fantasy,” he once said.

Born in Brooklyn, New York, in August 1920, Tooker graduated from Philips Academy in Andover, Massachusetts, and Harvard University. In 1943, he enrolled at the Arts Students League in New York, where he studied with Reginald Marsh, Kenneth Hayes Miller, and Harry Sternberg. A year later he met Paul Cadmus, and then Jared and Margaret French, artists with whom became lifelong friends. Cadmus, in particular, encouraged him to adopt egg tempera as his primary medium. 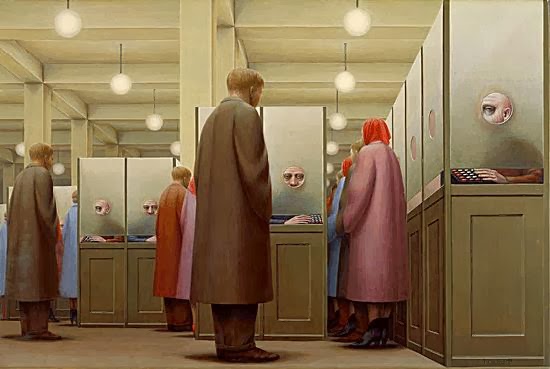 In 1953, Tooker and his partner, William Christopher, bought a brownstone on State Street in Brooklyn Heights. By the late 1950s, they had begun building a house on property that they had purchased in Vermont, not far from Jared and Margaret French’s summer home. They relocated from Brooklyn in 1960, and Tooker lived there for the rest of his life.

George Tooker is represented in museum collections across the country, including those of the Metropolitan Museum of Art, Museum of Modern Art, Whitney Museum of American Art, Brooklyn Museum, Hirshhorn Museum and Sculpture Garden, and National Museum of American Art. He had numerous museum exhibitions over the years, such as a retrospective, George Tooker: Paintings, 1947-1973, organized by the Fine Arts Museum of San Francisco, California, in 1974; George Tooker: Paintings and Working Drawings at the Marsh Gallery, University of Richmond, Virginia, in 1989; 50 Years of Painting and Study Drawings at the Addison Gallery of American Art in Andover, Massachusetts, in 1994; and George Tooker: A Retrospective at the National Academy Museum, New York, Pennsylvania Academy of the Fine Arts, Philadelphia, and Columbus Museum of Art, Ohio, in 2008-09. His most recent exhibition was George Tooker: Studies for Paintings at DC Moore Gallery, New York, in 2009. He received the prestigious National Medal of Arts in 2007. 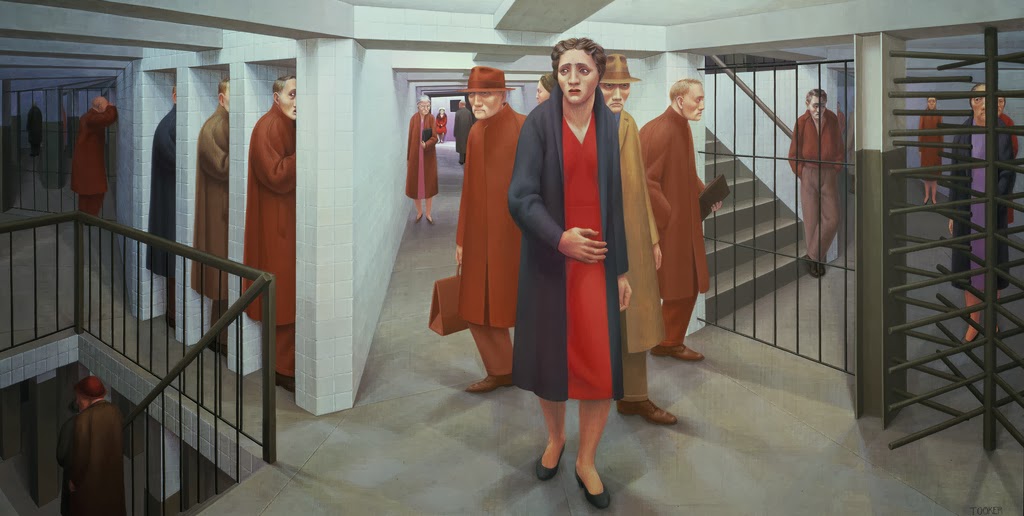 Tooker is survived by a sister, Mary Tooker Graham; her children, Peter and Russell Hume, and Angus and Angela Graham; and family members, Aaron Watkins and Sheila Adams, and Robert and Robin Watkins.