The first retrospective exhibition in thirty years of the work of Martin Johnson Heade (1819-1904), widely recognized as one of America's greatest romantic painters, was on view at the National Gallery of Art, 13 February - 7 May 2000. Heade produced perhaps the most varied body of work of any American painter of the nineteenth century. Seventy-four paintings--including landscapes, seascapes, still lifes, and botanicals--were presented. Martin Johnson Heade was organized by the Museum of Fine Arts, Boston, where it was on view in 1999. After the exhibition in DC, it traveled to the Los Angeles County Museum of Art, 28 May - 17 August 2000.

In his own lifetime Heade was not considered an important artist and was nearly forgotten after his death in 1904. Not until 1943, with the rediscovery of the mysterious Thunder Storm on Narragansett Bay (1868), was the work of this inventive and prolific artist collected and studied. The son of a farmer, Heade was born in 1819. He began to paint at the age of 18, traveling the length and breadth of America and journeying to Europe to learn his trade, while painting portraits, genre scenes, and copies of American and European portraits.

Becoming interested in landscape painting in 1857, Heade developed his own approach to the subject, taking elements of technique from the Hudson River School and adapting them to his uses. He was a keen observer of the physical world, but was also a romantic and a loner. Where his contemporaries in the Hudson River School presented epic sunset scenes of the Catskill Mountains or of the Hudson Valley, Heade painted salt marshes of the East Coast. More than 120 views of salt marshes make up one-fifth of his total output.

In works such as Salt Marsh Hay (c. 1866-1876) Heade presents the marsh in the dramatic light of an approaching thunderstorm.

Another of Heade's singular subjects was hummingbirds, which he depicted either on their own or in juxtaposition with equally exotic tropical orchids or passionflowers. Hummingbirds are referred to as "gems" or "jewels" because of their iridescent feathers, and Heade was, as he put it, a "monomaniac" on the subject. He painted many small works for an unrealized book that was to have been titled The Gems of Brazil. The paintings, created in the Gems format--vertical composition, approximately 12 by 10 inches, depicted both the male and female of various species. It is not known conclusively if they were painted for the book, but a renowned series of small hummingbird paintings, also called The Gems of Brazil (c. 1864-1865), are here on loan from the preeminent Heade collector of our time, Richard Manoogian.

An Amethyst Hummingbird with a White Orchid (c. 1875-1890), from a later series, sets a tiny "gem" beside an orchid of similar coloring (the white-and-purple Lealia purpurata), whose petals echo the cleft shape of the hummingbird's tail. Heade's last series of works were painted in Florida. Giant Magnolias on a Blue Velvet Cloth is a horizontal composition in which the voluptuous white flowers seem almost to glow against the soft, dark velvet, as the glossy leaves reflect the light. Heade's haunting painting seems to have more to do with the painter's memory and imagination than with fact. He was still painting up until a few weeks before his death in 1904. 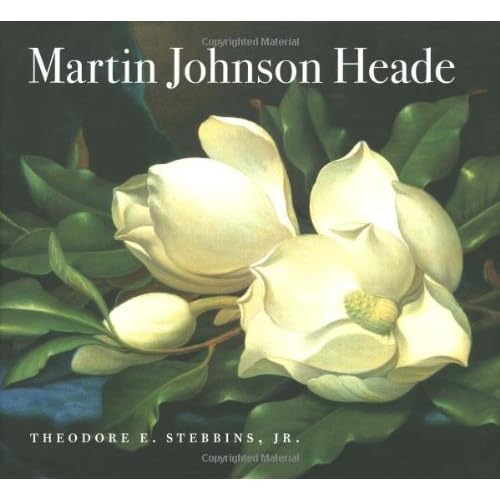 A fully illustrated catalogue presented new scholarly research in the study of Martin Johnson Heade's paintings with an introductory essay by Stebbins.

Posted by Jonathan Kantrowitz at 6:52 AM